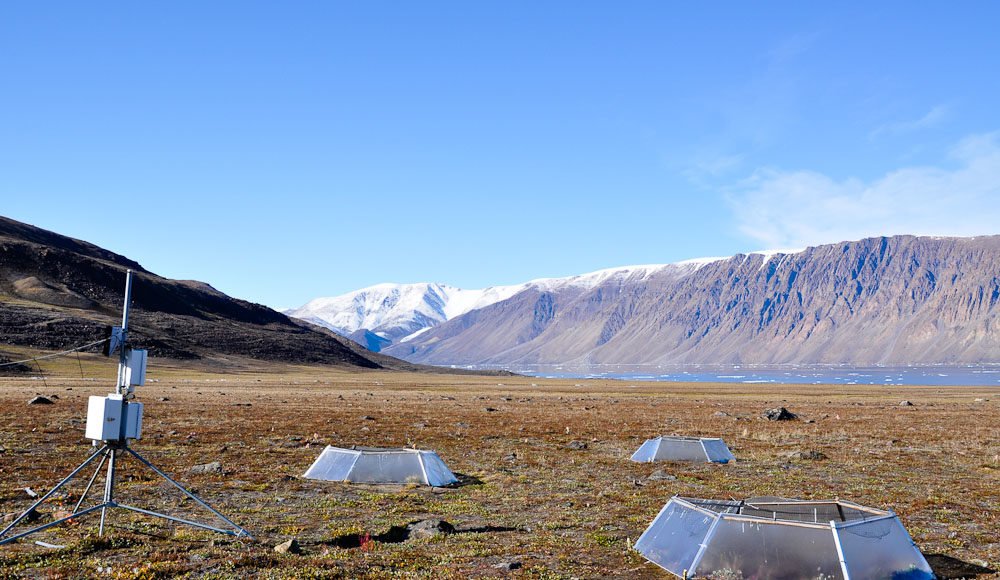 Plants are grown under controlled conditions to simulate a warming Arctic at an International Tundra Experiment system site near Alexandra Fiord in Nunavut. (Photo courtesy of Anne Bjorkman)

As the Arctic warms, plants will sprout and flower earlier and hold their leaves longer, expanding the growing season. That is the consistent pattern emerging from experimental sites around the Arctic and at high-altitude sites well south of the Arctic and detailed in a new study published in the journal Nature Communications.

The sites, ranging geographically from High Arctic tundra to high-altitude points in the Rocky Mountains and Alps, give some clues to ecosystems of the future. 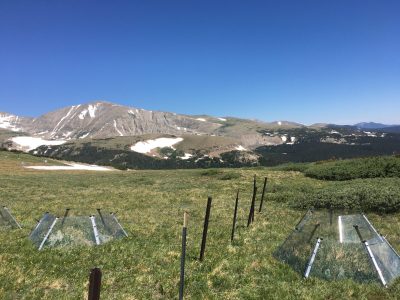 Plants are grown in conditions the simulate warming conditions at an ITEX site at Niwot Ridge in Colorado. (Photo courtesy of Jane Smith)

“This kind of represents the New Arctic,” said co-author Jeff Welker of the University of Alaska Anchorage and the University of Oulu in Finland. “This is a little bit of a crystal ball of where we’re headed.”

On average, the result showed, warming of 0.5 degrees to 2.3 degrees Celsius produced a 3 percent expansion in the growing season. For the Arctic, where summers are short, that means an additional 1.5 days to what is generally a 55-day season, said Courtney Collins of the University of Colorado.

“To us, the plants really respond similar to the warming, whether they’re in a mountain range in Europe or in northern Canada,” Collins said.

The study synthesizes information from long-term work at experimental plots in the International Tundra Experiment system, an international collaboration of scientists studying cold-adaptive plants and their responses to changing conditions. At the 18 sites in the Arctic, subarctic and high-mountain areas that supplied information used for the study, plants were grown in open-top chambers where temperatures were manipulated to be warmed. That experimental work at some of the sites dates back to 1992, according to the study.

The results are likely conservative, Collins said. The actual future warming that is forecasted to occur in some of the sites could be five times as much as the warming levels used in the experiments, she said.

The extension of what is now a short growing season is expected to have cascading effects through Arctic ecosystems — though it is not clear what those will be, and there will likely be differing impacts at different locations across the Arctic.

Most places are getting greener as the Arctic warms — but some are getting browner instead. A previous study co-authored by Welker examined shrub rings and tied sea-ice loss — and its related atmospheric warming — to increased plant growth in most areas. However, in a significant minority of the study areas, where geology makes the ground relatively dry, the increased heat hindered plant growth making them wither and turning the landscape brown.

Grassy tundra areas, such as Alaska’s North Slope, are moist areas where warmth is causing greening — and, according to the newest study, are expected to have a lengthened growing season. But when it comes to the caribou herds that live there, it is yet to be determined whether the expanding growing season will be good or bad, Welker said.

If the expanded growing season means plants that provide good nutrition for caribou are more available, the animals will benefit, Welker said. “You’re going to have more groceries on the landscape for caribou and reindeer,” he said.

But an expanded growing season might also be detrimental if it brings to the landscape a lot more woody shrubs that are hard for those animals to digest, he said. “Encroaching shrubs into the grassland in the north may not be beneficial to caribou,” he said.

Within the coastal plain of the Arctic National Wildlife Refuge, for example. Projections are for future warmth-induced changes in vegetation to expand the suitable calving and post-calving habitat for caribou, according to a separate study.

ITEX collaborators are also looking at other ways that warming is affecting plants in Arctic ecosystems.

Several scientists have been tracking the above- and below-ground carbon fluxes under warming conditions, comparing carbon uptake from photosynthesis during plant growth to carbon release during plant decay. One ongoing project led by researchers at Sweden’s Umeå University, for example, is examining the impacts of warming on the different stages of plant decomposition.

Another ITEX-related project tracked the impact of warming on microbes in the soil and in the vegetative litter, the upper layer of material shed by plants. While the litter layer held concentrations of microbes two to three times that of the soil layers below, there appeared to be no direct effect of warming on microbe production, according to a study recently published in the journal Arctic Science. However, there may be an indirect effect, as more warming yields more litter.

One of Welker’s ITEX-related projects at the Toolik Field Station in Alaska is examining plants’ responses to the combination of warming with changes to rainfall and snowfall. A key question will be whether the tundra plants are dependent on rainfall during the growing season or on meltwater from snowfall in the prior season, he said.