Team had high hopes, coming fresh off a tournament win in Oshawa 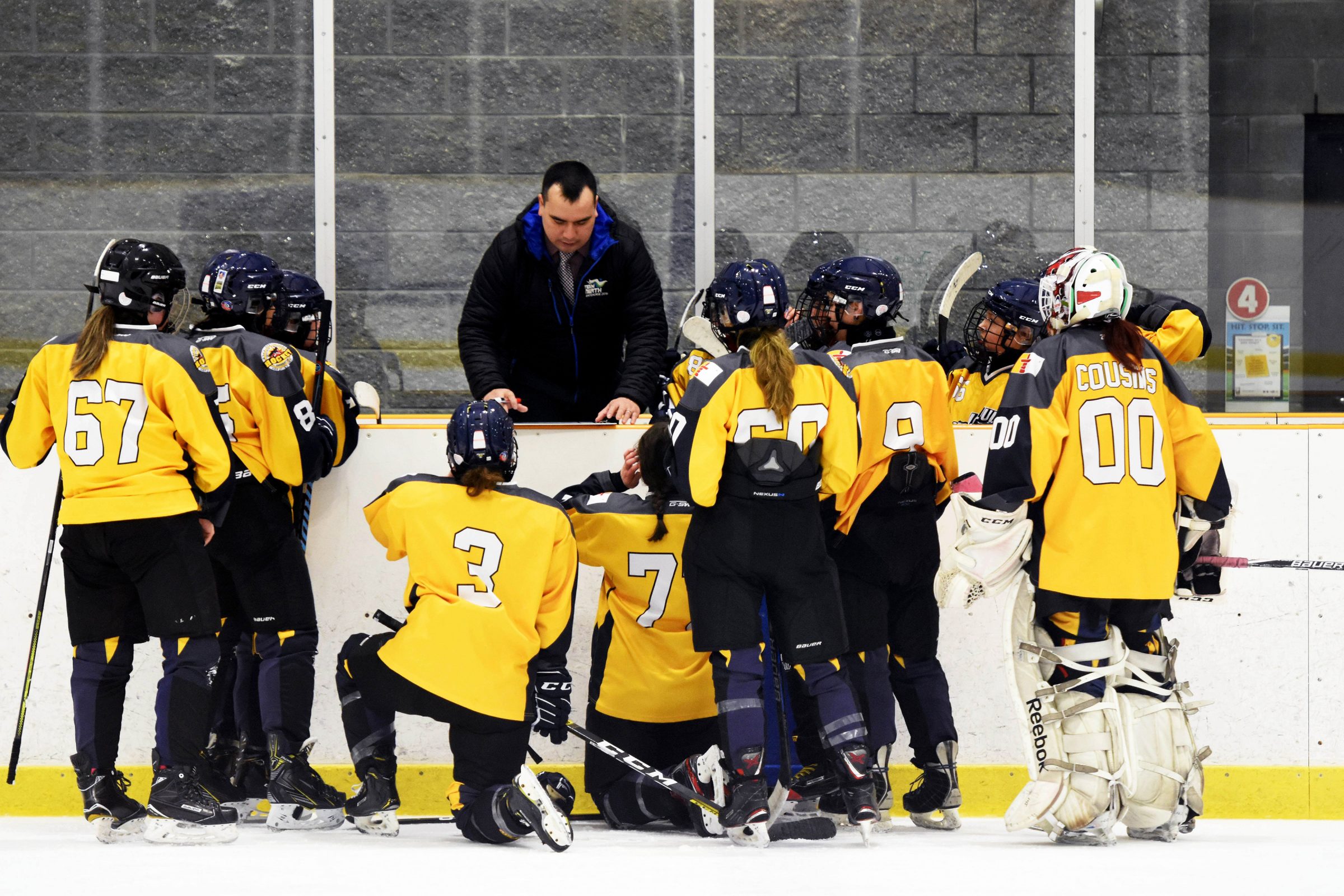 Coach Jamie Savikataaq breaks down a play for Nunavut’s female hockey team during a timeout at the Oshawa Lady Generals Winter Classic. The girls went on to win the tournament without dropping a single game. (Photo by Laisa Kilabuk)

This was going to be Nunavut’s year: The year the territory’s female hockey team at the Arctic Winter Games broke its zero-win record.

“I think we’re gonna win the whole thing,” she said with a slight smile in the foyer of an Iqaluit hockey rink. 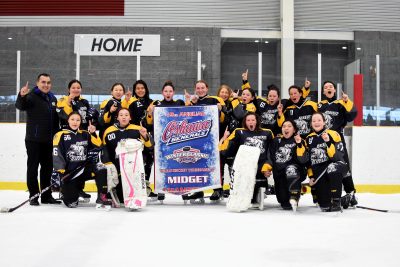 “I thought we were going to go pretty far this year,” Riley Lachance, 16, the team’s goalie and two-time veteran of the AWGs, said from Rankin Inlet.

“Our connection with each other was something that I didn’t experience the past two AWGs.”

But those dreams and that momentum took a serious hit on Saturday, March 7, when the AWG Host Society in Whitehorse, Yukon, issued a news release announcing the cancellation of this year’s games.

“This decision is a result of concerns around the spread of COVID-19 and is supported by the Arctic Winter Games International Committee,” the release said.

There have not yet been any cases of the coronavirus in Canada’s North, but Yukon’s chief medical officer supported the society’s decision as a precautionary health measure.

“The girls have all dedicated a significant amount of time training and preparing for the games. It’s hard to accept the truth right now but I know [the girls] will bounce back as they are a resilient group when faced with adversity.” 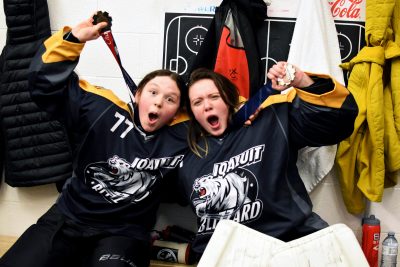 Talia Armstrong, left, and Riley Lachance whoop it up in the locker room after winning the championship game in Oshawa on March 1. (Photo by Laisa Kilabuk)

Despite the setback, it’s clear something special is happening in Nunavut’s female hockey world: a new sense of empowerment.

Talking to the young athletes and their coach makes that clear.

The team, scouted and selected over the past two years, is fresh off a tournament win in Oshawa.

The girls won all six of their games at the recent Oshawa Lady Generals Winter Classic, including the championship game, Savikataaq said. That tournament took place between Feb. 28 and March 1.

The tournament was used as a tune-up for the AWGs, a chance for the girls to build their chemistry and to bond on the bus ride from Ottawa, at the hotel in Oshawa and, of course, on the ice playing.

“It was a very successful tournament for us, both on and off the ice. The competition was fairly decent, but we have a pretty strong team this year, including a lot of players returning to the AWGs,” Savikataaq said a day before the games were cancelled. 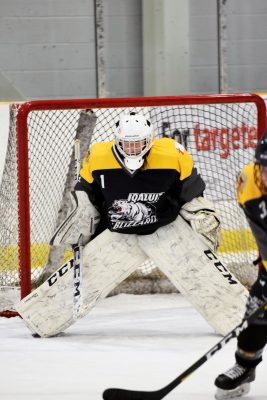 Riley Lachance of Rankin Inlet focuses during gameplay at the Oshawa Lady Generals Winter Classic. The U19 Nunavut team won the championship on March 1. (Photo by Laisa Kilabuk)

Hockey is a male-dominated sport and female players in Nunavut face hurdles and barriers that males don’t, he said.

In the past, girls have been excluded from playing with boys after a certain age, have had to find space in closets or hallways to change into their gear, and endure bullying by some male hockey players, added Savikataaq.

“I’m very passionate about women’s hockey, and want to make sure they have the best opportunities and experience possible.”

That attitude is reflected in some of his players.

Maiya Nadrowski, 15, from Iqaluit plays defence. She left a school trip in Australia and New Zealand to join her team in Oshawa.

“It was a lot of fun for me to see the girls from other communities again,” she said.

When asked if she had a signature move after scoring a goal, Nadrowski shrugged her shoulders and said she just hugs her teammates.

Her two siblings and dad play hockey too.

But sometimes playing with other boys in town hasn’t been fun.

“Sometimes it’s difficult. Girls feel excluded, not seen as real competition, not treated fairly and taken as a joke.”

Talia Armstrong, 15, also plays defence for the Nunavut under-19 team.

She said she enjoys playing with the boys sometimes because it’s a challenge. 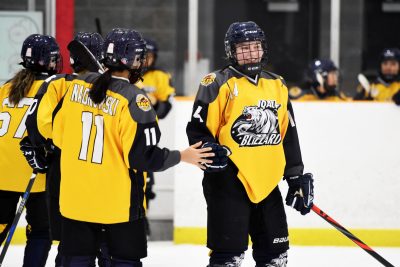 Madison Ahle smiles after scoring a goal at a tournament in Oshawa last month. The U19 girls’ successful tournament was meant to be a tune-up to the AWGs, which were cancelled due to concerns over the spread of the coronoavirus. (Photo by Laisa Kilabuk)

Talia, nicknamed by some of her teammates as “Deadly” and others as “Darla” from the movie Finding Nemo, said she has worked hard on her slapshot with the help of her dad.

“Gaining confidence has been hard sometimes, but there are a lot of people who’ve helped like Jamie [Savikataaq] and my dad.”

Both Armstrong and Nadrowski agreed that, although not officially announced, Ahle likely would have been their captain at the AWGs.

And it’s not hard to see why: Ahle carries herself with poise.

Ahle too has felt excluded by boys playing hockey at times, but she also found it a challenge she could often meet.

“But playing with girls is more positive and encouraging,” she said. 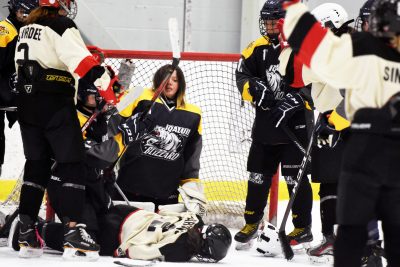 Riley Lachance looks on after play is halted at the Oshawa Lade Generals Winter Classic. (Photo by Laisa Kilabuk)

Lachance, the goalie from Rankin Inlet, said that female hockey players need more support than they often get, including from some coaches.

But the team is lucky to have Savikataaq as their coach, she added.

“He’s one of the biggest supporters of female hockey in Nunavut,” she said.

She was bummed to find out the AWGs had been cancelled, Lachance said.

Her time in Oshawa with her teammates from across Nunavut was a very positive experience, she added.

“It was really a once-in-a-lifetime moment, where we had such a small amount of time to grow so quickly.” 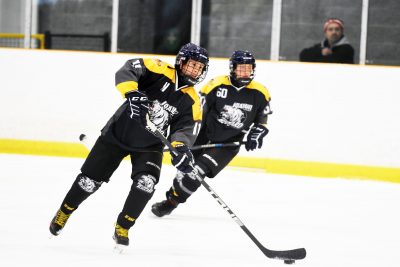 Maiya Nadrowski skates up the ice in Oshawa at a recent tournament that saw the Nunavut U19 team emerge victorious. The tournament was meant to be a tune-up for the AWG. (Photo by Laisa Kilabuk)

One of her favourites parts of the tournament was the pre-game locker-room ritual.

“We’d make sure everyone was prepared and ready and pumped…. If someone wasn’t feeling themselves or having the greatest day, we’d make sure they were OK and encourage them: ‘You know, you gotta change that attitude and not let the team down.’”

Savikataaq said the future of women’s hockey is getting brighter in Nunavut. The girls have their own change rooms in Iqaluit now, and can play contact hockey with the boys, many of whom treat the girls better than in years past.

“I firmly believe my job is not just to coach them to win, but to ensure everyone has fun and is included. Hockey teaches you life skills, like self-reliance, teamwork, leadership, respect for yourself and your opponent…. And the brotherhood and sisterhood bond in hockey, you have personal friends for the rest of your life,” he said.