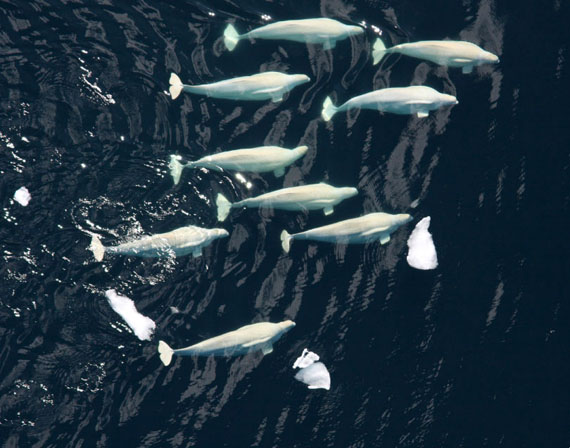 Through the Inuit Nunangat Research Program, researchers will collect gene samples of the beluga whale in Kangiqsualujjuaq, where longstanding hunting restrictions have been in place. (File photo)

A new Inuit-led research program is funding nearly a dozen projects across the North that include from Arctic char health to Beluga gene sampling and disease contact tracing.

The Inuit Nunangat Research Program’s goal is to advance “Inuit governance in research,” according to a news release from ArcticNet, a research organization based out of Laval University. It brings together scientists studying climate change’s impacts on the Arctic, which is running and funding the program.

Charlee Heath, a spokesperson for ArcticNet, says the program took nearly two years to form, and that it’s the first of its kind.

“We are extremely proud to note that this is the first Inuit-led, directed and governed research program in the world,” she said in an email to Nunatsiaq News.

The program has been approved for $3.75 million in funding, and each of the 11 projects will receive between $40,000 to $230,000, depending on what the team leaders submitted in their proposals. The projects will take one to two years to complete, she said.

In Kangirsuk, where the fish’s population is unmonitored and hunters say it’s decreasing, project lead Noah Eetook will look to collect baseline data, tag char to study its winter habits and train youth in research methods.

In Kugluktuk, where hunters report that the health of char has been declining and some have meat that smells bad once filleted, project lead Eric Hitkolok will measure water quality and levels of contaminants exposed to the char.

And in Naujaat, researchers will try to learn more about the locations and migration patterns of Arctic char as they travel along rivers between the coast and the lakes where they overwinter.

Other projects range from work in Cambridge Bay to document environmental terms in Inuinnaqtun to acoustic monitoring in Clyde River and sampling of beluga whale genes in Kangiqsualujjuaq.

In the fall, ArcticNet will be seeking more submissions, with around $2 million to distribute.

The organization is currently trying to find ways to make the program sustainable in the long-term, Heath said.