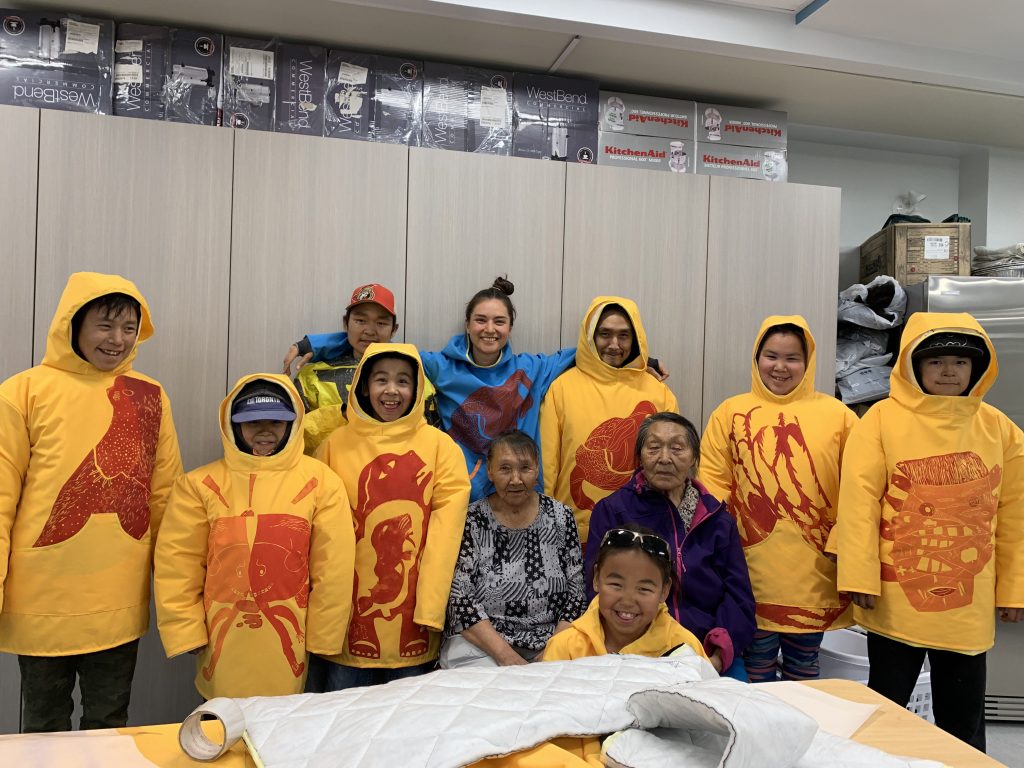 The hard work and creative perseverance of Cape Dorset youth has earned that community a new space for youth to create art at the local Peter Pitseolak High School.

The youth space in Kinngait opened its doors this summer. A donated printing press dominates the large room with high ceilings and open rafters, while work tables and works-in-progress fill the space.

Completed works and banners hang from the walls, which prompt memories from the youth who helped create those works. 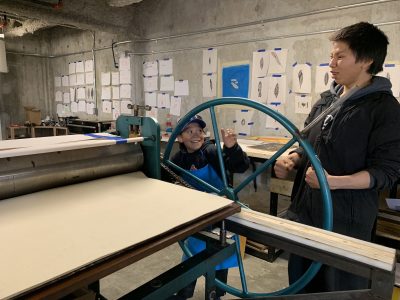 Joanasie Atsiaq and Oqittuq Parr learn to use the new etching press. (Photo courtesy of Embassy of Imagination)

Saaki Nuna, 17, said that learning how to use the printing press “was confusing and interesting to use first, because it had a lot of things and parts we had to move around. But now it’s a lot quicker and comfortable.”

“I’ve gone to the [Kinngait Studio] print shop before so I’ve seen how it works. But this summer I learned how to use a printing press myself.”

Nuna is one of over 70 youth who have already taken advantage of the art space since it opened its doors about a month ago, organizer Alexa Hatanaka said.

Hatanaka along with Patrick Thompson, who together formed Embassy of Imagination, have travelled to Cape Dorset to organize and run art workshops and projects for six years.

“Youth have really earned this space with their energy, and because they’ve demonstrated what they’re able to do when they’re supported and given the resources,” Hatanaka said, pointing to art projects undertaken by local youth with Embassy of Imagination both within the community and in southern Canadian cities like Ottawa, Montreal and Toronto.

“It’s important for the youth to be recognized for their energy and dedication, to realize they’ve been a huge part of making this happen.”

Embassy of Imagination has joined forces with the Cape Dorset District Education Authority to run programs this summer at the art space, which has yet to be named. So far their efforts have focused on making functional but artistic parkas. 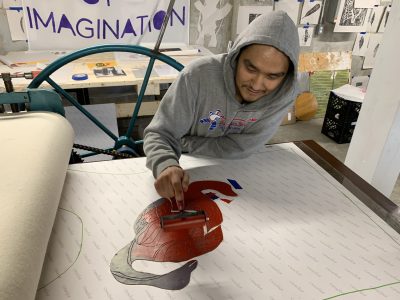 Cie Taqiasuk inks up his matrix in preparation for printing his parka on the press. (Photo courtesy of Embassy of Imagination)

The youth print their own design onto fabric, and then local sewing experts Ooloosie Ashevak, Seeta Saila and Nicotye Qimirpik help them sew their own parkas.

The parkas will then be worn during a procession in town on Aug. 3.

David Pudlat, 14, said that sewing a parka was his favourite part of this summer’s arts programs.

“I get to put my own art on it, and I made my own parka for the first time ever,” Pudlat said.

Pudlat has been involved with other Embassy of Imagination projects, including travelling to Spain and England last year to exhibit and sell some of his own artwork.

The self-made parkas are only the first part of a larger project this summer, Hatanaka said.

The youth are also making a life-size model of a snowmobile out of copper wire from the old power plant—an homage to the newly bought snowmobiles for the DEA’s land program, Hatanaka said.

The model will be part of the local procession of youth. 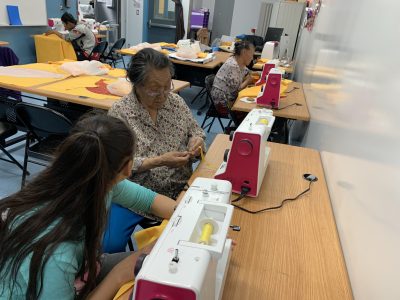 Seeta Saila shows the students how to sew their parkas. (Photo courtesy of Embassy of Imagination)

“We really wanted the art space to be connected to the land program, which is what we’ve always tried to do—to connect land programming to art workshops.”

That’s why Embassy of Imagination partnered with the local DEA, to dovetail the art and land programs, Hatanaka said. This summer the DEA is building a cabin with youth, which will then be transported somewhere outside of town.

But the procession involving the parkas and snowmobile won’t stop in Kinngait.

Eight local youth will travel to Toronto in September to continue the procession as part of the Toronto Biennial of Art, passing by murals created by Kinngait youth and the Toronto Inukshuk, created by Killipalik Qimirpik, grandfather of one of the artistic youth.

The youth will then take workshops and build skills before exhibiting their work with dozens of other artists from all over Canada as part of the Toronto Biennial of Art, Hatanaka said.

Overall, this project involves over a dozen different partners and funders, including the Oasis Skateboard Factory in Toronto, the Government of Nunavut, and the art councils of Ontario and Canada.

“It’s a special opportunity for professional development for them, broadening their knowledge of what’s happening in [the] arts by working with and learning from 60 or 70 other artists from around the world,” said Hatanaka. “The youth will get to see a range of what’s being made and talked about in the arts world—materials, mediums, performances.”

Hopefully, youth will see that a long, successful career in the arts is a real option, Hatanaka said. Especially since their hometown’s rich artistic history gives them a head start. On the other hand, the youth will learn self-expression and other life skills, she added. 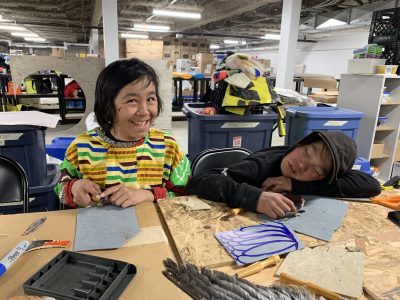 Katsua Saila takes a nap while David Pudlat hams it up for the camera during a relief printmaking session. (Photo courtesy of Embassy of Imagination)

Taqialuk Nuna, a well-known and longtime Kinngait carver, said projects by Embassy of Imagination are helping not only local youth but the whole community.

“I love what they’re doing because it’s helping the young people, helping the whole community…. They give a lot of kids good confidence. It’s good to take them out to another community or city. And the art they do in town really brightens up the town,” Nuna said. His son Saaki Nuna has already made his own parka for the Aug. 3 procession.

“Saaki tried to really participate so I noticed that, he likes what he’s doing.… He’s been doing really good, ever since he was involved,” Taqialuk said of his son.

Embassy of Imagination has applied for funding to have extra teaching staff during the school year supervise the space.

In the meantime, youth supervisors who have worked with Embassy of Imagination for a number of years will keep the space active and running, Hatanaka said. 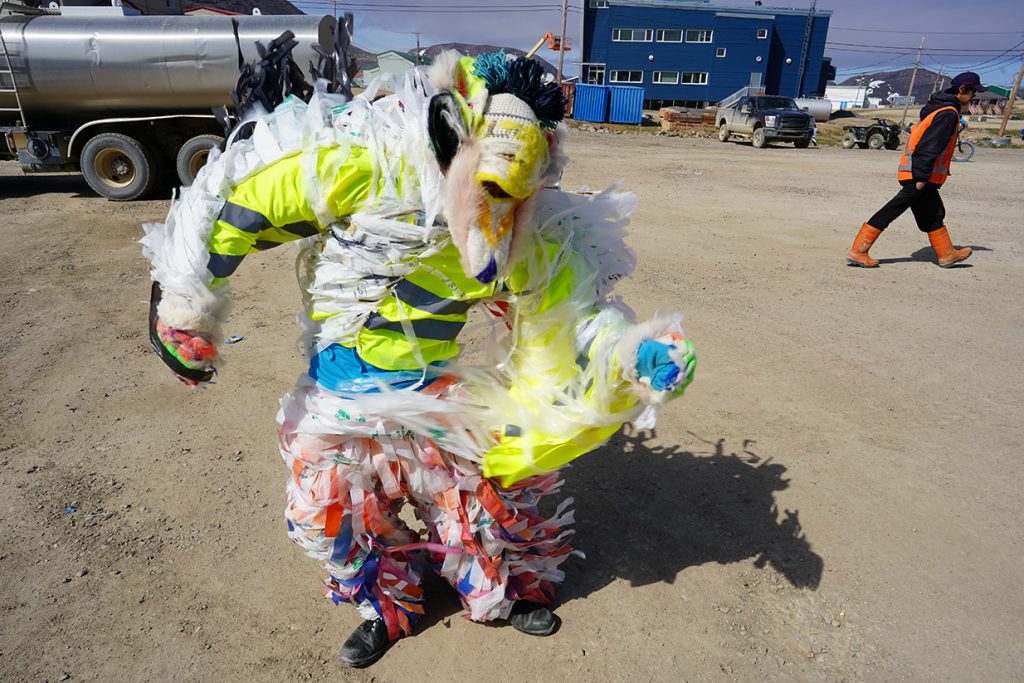 Iqaluk Ainalik dances in his costume on Canada Day, created for the Sinaaqpagiaqtuut Procession. The costume was created in collaboration between Iqaluk Ainalik , Alexa Hatanaka and Leah Mersky. (Photo courtesy of Embassy of Imagination)