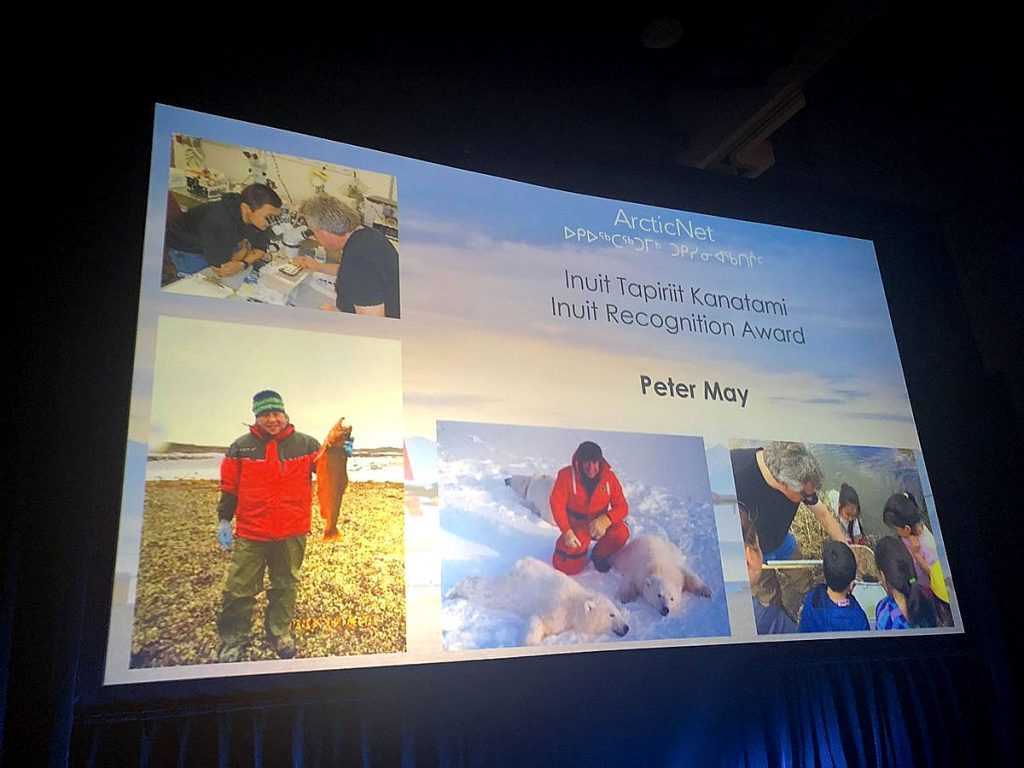 OTTAWA—It’s time that Inuit become research leaders in Inuit Nunangat: that was the message from participants who attended a gala evening near the end of the ArcticNet annual science conference in Ottawa this week.

At its Thursday evening gala, Governor General Julie Payette encouraged young researchers to continue their work — but many are likely to remember the Inuit who received awards.

For example, Peter May of the Nunavik Research Institute in Kuujjuaq, well-known for his studies on geese, caribou and other Nunavik wildlife, received Inuit Tapiriit Kanatami’s Inuit Recognition Award. This award recognizes Inuit “who are making strong efforts towards meaningful Inuit involvement in Arctic research.”

Also, the Nunavik Research Institute, where May works, was the 2018 recipient of the Northern Science Award from Polar Knowledge Canada.

This award is presented annually to an individual or a group making “a significant contribution to meritorious knowledge and understanding of the Canadian North.” Enooyaq Sudlovenick of Iqaluit presents her research on pathogens and heavy metal content in ringed seals in Iqaluit at ArcticNet on Dec. 13. Her conclusions: that ringed seals in Frobisher Bay are healthy, hunters’ assessments are efficient and any risk assessment due to heavy metals or pathogens must weight the presence of contaminants versus the benefits of eating seal. Speaking in Inuktitut in a video that shown after a panel on women and diversity, later in the day, she said Arctic research needs more Inuit involved in research. (PHOTO BY JANE GEORGE)

Enooyaq Sudlovenick of Iqaluit, who is a graduate student at the University of PEI, also received the top $1,000 award from ArcticNet for the presentation of her research on pathogens and heavy metal content in ringed seals in Iqaluit.

Also on Thursday, the call for the establishment of an Inuit Nunangat university grew stronger at the conference’s Dec. 13 afternoon panel on women and diversity. Carolyn Bennett, the minster of Crown-Indigenous Relations, offers opening remarks at ArcticNet’s Dec. 13 panel on women and diversity in northern science. During the panel, Iqaluit Mayor Madeleine Redfern, second from the left, talked about the need for more Inuit researchers and a university in the North. (PHOTO BY JANE GEORGE)

Iqaluit Mayor Madeleine, one of the panellists, said Inuit, not southerners, should frame Arctic research.

But to do that, the North needs a university, she said.

”Imagine what Ontario would be like without a university?” she said.

An Inuit Nunangat university might not resemble universities in the South exactly, but would be shaped by the research carried out by its faculty and students, she said.

And that research would also guide programs and policies, Redfern said.

A northern university could also mean that Inuit would actually carry out the research and ask the questions.

Governance is the biggest barrier stopping a university from happening, Redfern said, because a university wouldn’t have to start as a large institution to succeed.

“I don’t think it’s money,” she said, calling the lack of investment in a northern university a “discrimination of low expectations,” revealing a prejudiced attitude towards Inuit.

“Reconciliation (with Inuit) should include post-secondary education,” Redfern said to the audience, which included Carolyn Bennett, the minister of Crown-Indigenous relations.

Bennett had opened the panel by saying “we want to make sure that Arctic research is not just the land and ice, that it’s about the people, with Inuit and Indigenous knowledge.”

During the panel, Redfern suggested the mostly empty Canadian High Arctic Research Station in Cambridge Bay could be used as a university campus.

Redfern, who recently visited Cambridge Bay, said CHARS represents a “missed opportunity” and that its resources could be used for a northern university.

Post-secondary students talk about their challenges A university in the North would see more students finishing their post-secondary studies, said Concordia University student Lucina Gordon of Kuujjuaq at a Dec. 13 panel at the ArcticNet conference on Inuit students’ post-secondary experiences. (PHOTO BY JANE GEORGE)

The call for a northern university also came from another panel on Dec. 13, this one featuring post-secondary students from the four Inuit Nunangat regions who talked about the challenges they face.

These include being far from home, a lack of support from community and family, and the lack of role models to encourage them.

Lucina Gordon of Kuujjuaq, a graduate of John Abbott College, now a student at Concordia University in Montreal, said she thought a university in the North would solved many of the shared issues brought up by the panellists.

“A lot of people don’t want to leave their community and it’s a legitimate concern,” Gordon said.

Many of her peers from Nunavik quit their post-secondary studies before finishing, she said, and for her, pursuing post-secondary hasn’t been easy, either.

Gordon said when she arrived at John Abbott College, most of her classmates seemed to know exactly what they were doing in school— but she had no idea.

There were also pressures from her family back in Kuujjuaq and southern instructors who  caused additional stress due to their lack of awareness and sensitivity about the North and its social problems.