At national gathering, Arctic Anglicans say no to same-sex marriage 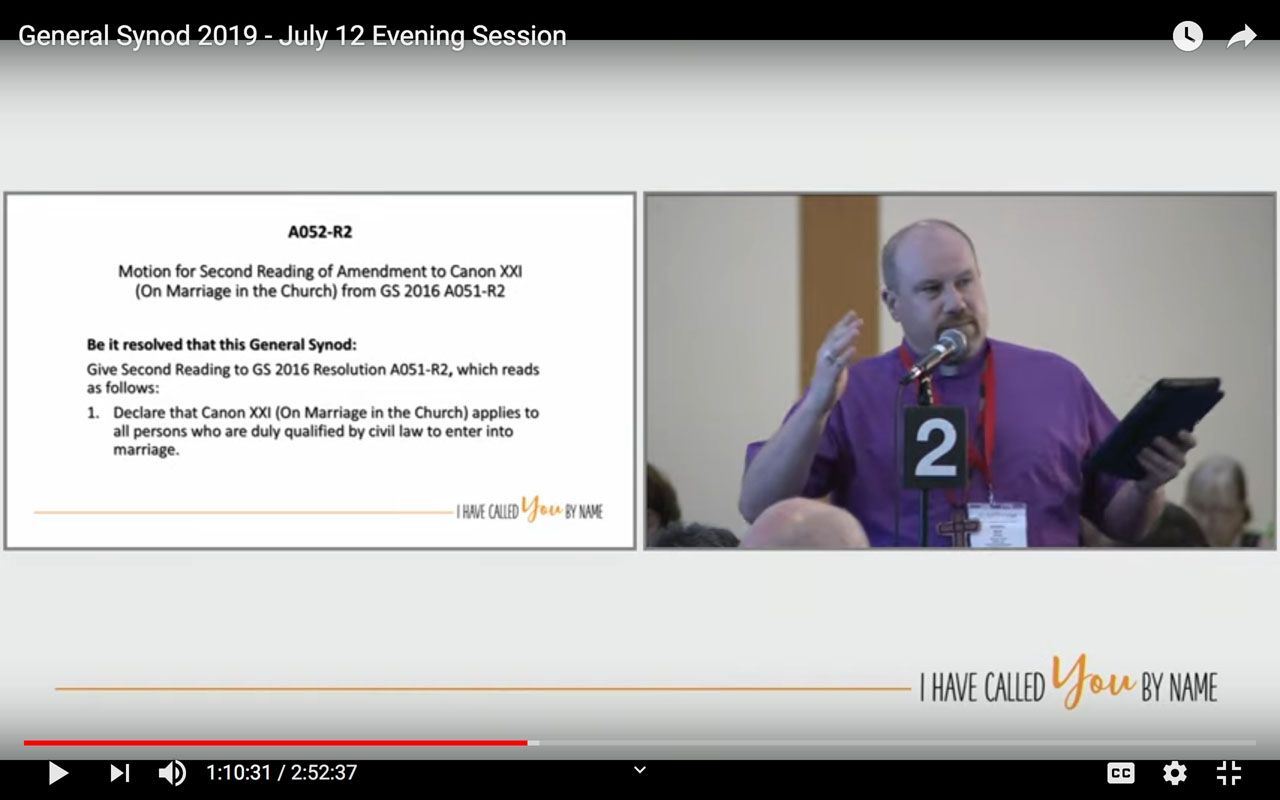 Anglican bishops representing the Arctic and other Indigenous and northern regions played a crucial role earlier this month in blocking a resolution that would have amended the Anglican Church of Canada’s canon law to permit the solemnization of same-sex marriage.

Anglican delegates from every corner of the country took part in a passionate debate on the issue this past July 12, during the church’s triennial synod, or national assembly, in Vancouver.

The resolution would have replaced the words “man and woman” and “husband and wife” with “the parties to the marriage” and would have extended the marriage sacrament to all persons able to get married under civil law.

One of many supporters of the resolution, lay reader Robert MacMillan of Nova Scotia, said he and his partner waited 20 years to get married. But to do that, they had to go to the United Church of Canada—because his local Anglican rector refused to marry them.

“I don’t want your children and our fellow LGBTQ to have to wait and suffer and be considered second-class citizens, or worse, you’re not worthy to be a Christian,” MacMillan said.

When the resolution failed on July 12, some of its stunned supporters cried out or broke into tears.

Under the church’s rules, the resolution needed a two-thirds majority among each of three groups: lay persons, clergy and bishops.

It won more than two-thirds support from lay people and clergy. But within the bishops’ group, 23 voted yes, 14 voted no and two abstained, a majority of only 62.2 per cent, if you do not include the abstentions, short of the required two-thirds.

That means it likely failed by a margin of two votes.

According to Statistics Canada surveys, between 50 and 60 per cent of Nunavut’s population identify as Anglicans, making it the largest religious denomination in the territory. 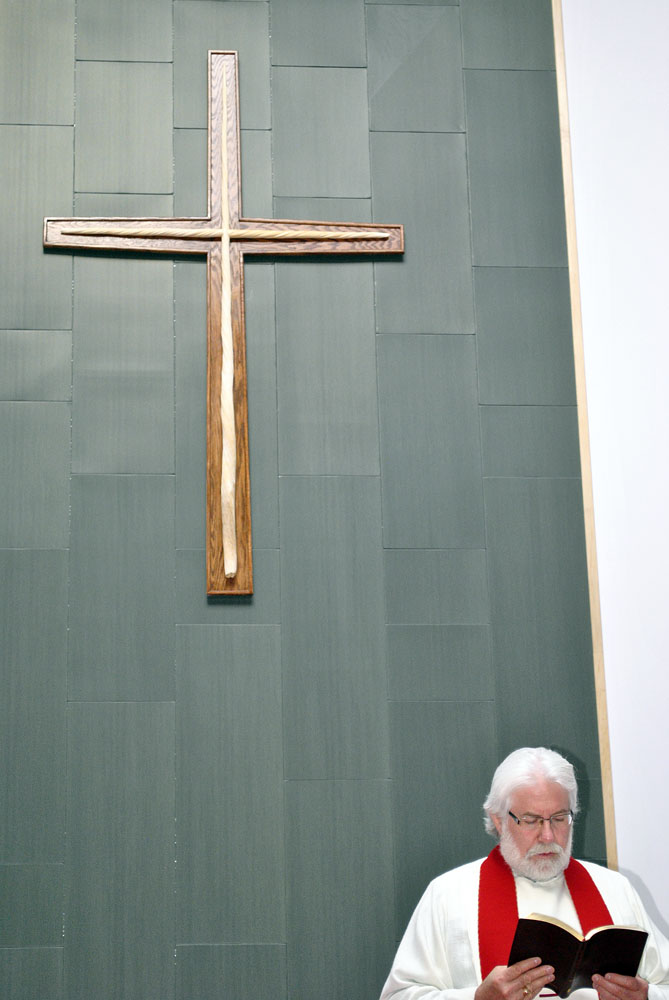 Bishop David Parsons, head of the Anglican diocese of the Arctic, at the 2012 consecration of the rebuilt St. Jude’s Cathedral in Iqaluit. (File photo)

Bishop David Parsons, head of the Anglican diocese of the Arctic, which includes Nunavut and Nunavik, was one of the bishops who voted no.

“That’s our position. We are in line with the doctrines and teachings of our church throughout the centuries,” Parsons told Nunatsiaq News in an interview.

At the same time, Parsons said the Anglican church in the Arctic does not exclude anyone and treats everyone with “a love that is unconditional.”

“We do not bar anybody. Everybody is welcome. That which we have experienced, we offer to everyone. That’s why in our mission statement we say we witness to all people regardless of race, colour, age, gender, or any other factor,” he said.

Parsons also set out the Arctic diocese position in detail last June, in an open letter.

“I see in many Anglicans a loving passion for all, and a desire to eradicate the injustices people have inflicted upon one another. I also share this passion and I realize that the hatred, isolation and prejudices experienced by so many people because of how they identify themselves sexually is both tragic and heart breaking,” Parsons wrote.

So although he feels sad to say it, “I must call the promotion, teaching, and endorsing of same-sex marriage false teaching and heresy,” he wrote in the letter.

Joey Royal, a suffragan bishop in the Arctic diocese who is director of the revived version of the Arthur Turner Training School for ministers at St. Jude’s Cathedral in Iqaluit, said on the floor of the synod that his love extends to LGBT people in the church—but he can’t support the resolution and would vote against it.

Royal was consecrated as a bishop this past March 31, along with Annie Ittoshat of Kuujjuarapik and Lucy Netser of Arviat.

Rev. Caleb Sangoya, an Anglican priest and regional dean at St. Timothy’s church in Pond Inlet, also opposed the resolution, saying he fears that adoption of the same-sex marriage resolution could lead to declining membership in Arctic churches.

“I’m looking after five parishes and they want to keep their tradition,” he said during the synod debate.

At the same time, like other delegates who voted no, his words and body language expressed the emotional complexity of the issue, and he said he recognizes LGBTQ people who are “fully committed to Christianity.” 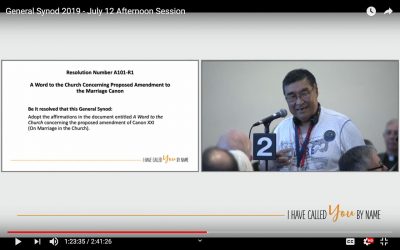 Other Indigenous delegates also spoke out against the resolution

For example, Lydia Mamakwa, bishop of Mishamikoweesh, read a statement from elders in her diocese, which covers 25 Cree and Ojibway communities in northwestern Ontario and northern Manitoba.

Created in 2014, the Indigenous Spiritual Ministry of Mishamikoweesh is the first self-determining Indigenous diocese within the Anglican Church of Canada.

“We commit to follow what God has ordained marriage to be: one man, one woman, together in spiritual union,” Mamakwa said, quoting from the elders’ statement.

“We strongly believe this alone is what marriage is. God has not changed marriage,” she said.

“This has nothing to do with hating anyone. As brothers and sisters in Christ, we are the total of one another,” she said.

However, the anger and grief generated by the same-sex marriage resolution’s defeat led two observers— in a recent article in the Anglican Journal—to warn their fellow Anglicans against scapegoating Indigenous people.

Mark MacDonald, the Anglican Church of Canada’s new national Indigenous archbishop, said that attacking Indigenous people for their opposition to the same-sex marriage resolution represents “misjudgment and mischaracterizations of Indigenous people as a whole.”

“We are concerned about the implications of that kind of scapegoating, and we’re trying to deal with it as gently and serenely as possible,” he’s quoted as saying.

MacDonald is also quoted in the article as suggesting that those who express those kinds of hostile and negative opinions are less than consistent in their support for Indigenous self-determination.

Another participant, Melanie Delva, the church’s “reconciliation animator,” is quoted by the Anglican Journal as saying that the vote on the marriage canon is a reconciliation issue.

In that spirit, delegates passed an “affirmation” that recognizes the right of Indigenous persons and communities to make their own decisions on same-sex marriage.

“Whatever the action of the church at this general synod, we affirm the right of Indigenous persons and communities to spiritual self-determination in their discernment and decisions regarding same sex marriage,” the affirmation said.

A vote on same-sex marriage narrowly passed at the Anglican Church of Canada’s 2016 national gathering. But under the rules of the church, a second reading was required in 2019.

Many churches in southern urban centres like Ottawa and Toronto have been performing same-sex marriages since 2016, and the Diocese of Huron, which includes the cities of London and Windsor, will begin offering the marriage sacrament to same-sex couples.

And delegates also voted to create a national Indigenous ministry.

You can view a full video record of the national synod here.