Company says it is not seeking permission to use route right now, but may in the future 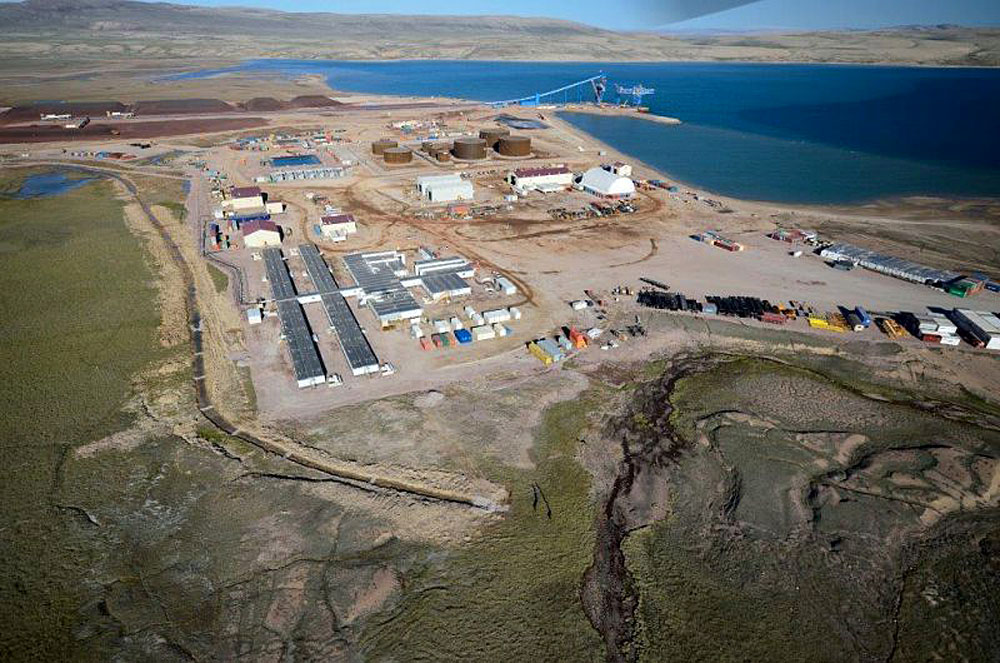 Baffinland Iron Mines Inc. has sent a letter to the Nunavut Impact Review Board clarifying its intentions around sending shipments through the Northwest Passage from its Mary River Mine, seen here. (Baffinland photo)

Baffinland Iron Mines Corp. says it has no firm plans to ship iron ore through the Northwest Passage, but may seek the advice of regulators to do so in the future.

The company offered these clarifications on Sept. 20 in a letter to the Nunavut Impact Review Board by Megan Lord-Hoyle, Baffinland’s vice-president of sustainable development.

The letter discusses a report, prepared by Stantec on behalf of Baffinland, that mentions the possibility of shipping ore west through the Northwest Passage, rather than east to Europe, as it does now.

The company wrote its letter in an effort to answer questions raised by a Nunatsiaq News article on the Northwest Passage report, according to Lord-Hoyle.

The company has said in an emailed statement to Nunatsiaq News, with regard to the report, that the Northwest Passage is one of the “alternative shipping routes” being considered for Baffinland’s proposed phase-two expansion plans. 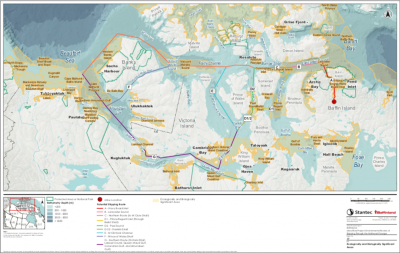 But that doesn’t mean the company is seeking permission from the review board to use this shipping route, at this time, Lord-Hoyle wrote in the recent letter to the regulator.

“The Northwest Passage Report was not provided for the purpose of seeking NIRB permission to use Navy Board Inlet or the NWP [Northwest Passage] for the Phase 2 Project at this time, but rather to support ongoing conversations respecting optional alternative shipping routes,” the letter states.

Navy Board Inlet is a channel south of Lancaster Sound, between Baffin Island and Bylot Island, which Baffinland has said could be used as an alternative route north around Bylot Island, rather than the current shipping route along its southern shore through Eclipse Sound.

But Lord-Hoyle’s letter says that the use of the inlet for shipping is unlikely, unless the community of Pond Inlet, along the current Eclipse Sound route, requested its use to limit the number of ships going past its shores.

Navy Board would also be the entry point to a route west through Lancaster Sound and the Northwest Passage.

“Baffinland continues to consider the issue of access to Eastern markets for iron ore,” Lord-Hoyle writes, which makes a more direct route west, through the Northwest Passage, more attractive.

China is by far the world’s largest importer of iron ore, taking in 63 per cent of what’s exported, according to the Observatory of Economic Complexity, at MIT. The next highest importers are Japan and South Korea at eight and five per cent, respectively.

Mary River’s iron ore is already reaching markets in Japan and Taiwan through its eastward shipments to Rotterdam, the Netherlands, and through Russia’s Northern Sea Route to its port of Nakhodka.

“Should Baffinland identify the need to advance discussions regarding the issue of access to Eastern markets for iron ore, Baffinland may develop a pilot study in future which would send limited numbers of test vessels to help evaluate feasibility of this option,” wrote Lord-Hoyle.

And for this, she said, the company would seek the advice of the review board, as well as the Nunavut Planning Commission, and would follow the necessary steps for modifying a project.

“Should the pilot study support further consideration of requesting permission for Baffinland to use the NWP as a permitted Mary River Project shipping route, Baffinland may seek approval for use of this route in the future,” she wrote.

But, for now, Lord-Hoyle said that Baffinland is not seeking permission to ship through Navy Board Inlet or the Northwest Passage as part of its phase-two proposal, for which hearings are scheduled for Nov. 2 to 9 in Iqaluit and Pond Inlet.

The deadline for applications for intervenor status at the hearings was Sept. 4, and at least one of the approved applications specifically referenced the alternative shipping route of the Northwest Passage.

In their application, Parks Canada representatives note that using the Northwest Passage would bring ships along the coastlines of Aulavik and Ivvavik national parks in the western Arctic, and through the migratory routes of muskox and caribou.

Female polar bears den on the coast here, the application states, and Inuvialuit use the area as whaling and fishing grounds.

It also notes that the establishment of Tallurutiup Imanga National Marine Conservation Area in Lancaster Sound will give Parks Canada a regulatory role in these waters—the entranceway to the Northwest Passage.