“It’s not even come close” 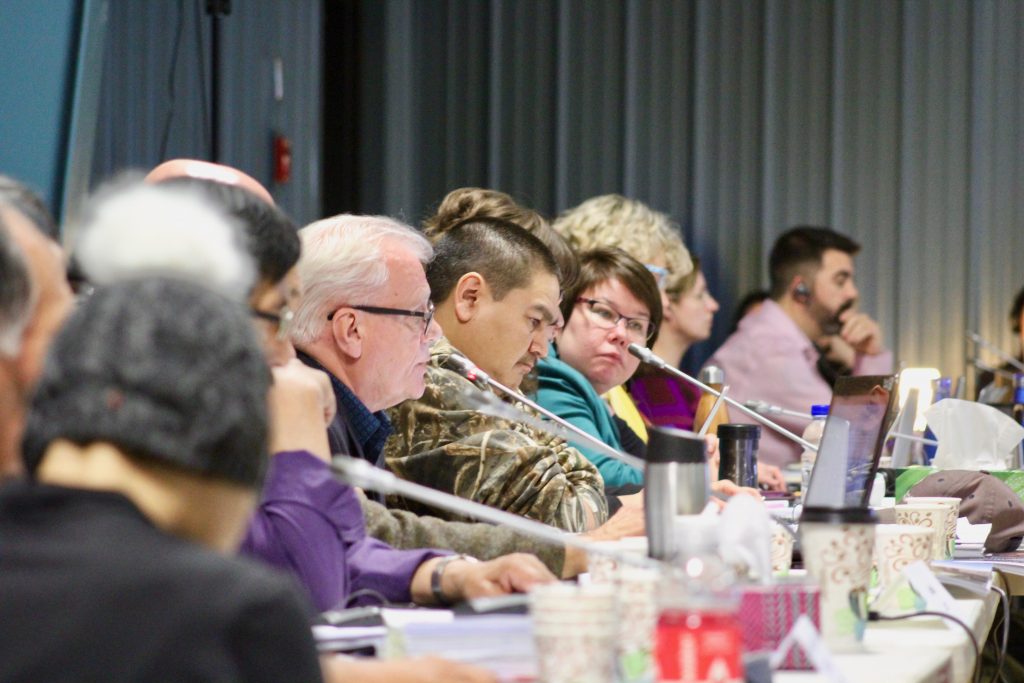 John Loxley, a professor of economics at the University of Saskatchewan, speaks on Tuesday, Nov. 5, at the Nunavut Impact Review Board’s final public hearing in Iqaluit on Baffinland Iron Mines Corp.’s proposal to expand operations at its Mary River mine. (Photo by Emma Tranter)

But one intervenor, John Loxley, a professor of economics at the University of Manitoba, was not originally scheduled to speak at the hearing.

Loxley is the author of a report released in 2019 called Assessment of the Mary River Project: Impacts and Benefits. That report found that Inuit occupy “a very small share of the jobs at this mine” and the rapid expansion of the workforce will in all likelihood further reduce the Inuit share.

A motion put forward by the Hamlet of Pond Inlet requested that Loxley give a presentation on his report, which the NIRB approved.

Part of Loxley’s presentation on his report focused on Baffinland’s Inuit employment targets, which in 2016, were 25 per cent.

Baffinland’s current Inuit employment is around 14 per cent, according to its 2018 annual report.

In his proposal, Loxley recommends that Baffinland compensate Inuit for what he describes as the wages that will be lost if the company does not meet Inuit employment targets.

Brad Armstrong, legal counsel for Baffinland, said that through the Inuit impact and benefit agreement, both the QIA and Baffinland have a joint responsibility to achieve Inuit employment targets.

“Under the Nunavut agreement, there is a requirement that before a company can go forward, they have to negotiate that project with the Inuit association…. There were very hard negotiations on both sides. Do you mean that the government or some other body should step in and start regulating this project, and isn’t this inconsistent with this agreement?” Armstrong asked Loxley.

Loxley restated his point about Baffinland not meeting its Inuit employment targets.

“This is about the company dealing with commitments it is failing to deal with,” Loxley said.

Merlyn Recinos, technical advisor for Igloolik, also encouraged Baffinland to give contracts to small businesses in the north Baffin communities affected by the mine.

Although it was day four of the hearing, intervenors were still on day one’s agenda. The NIRB also ruled on day four, Nov. 5, that the hearing would be extended to allow all intervenors to present and additional dates would be announced soon.

The Iqaluit portion of the hearing wraps up on Nov. 6 and continues in Pond Inlet on Nov. 8.