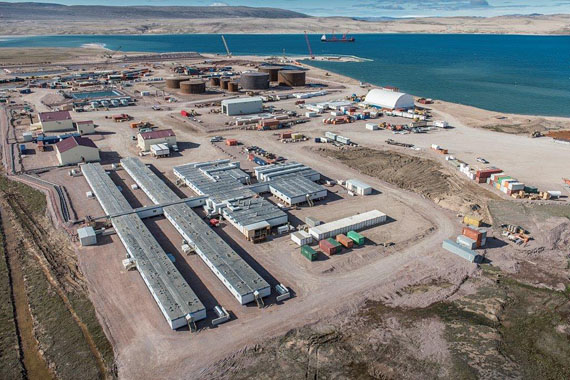 There are currently between 700 and 750 employees staying on site at Baffinland’s Mary River mine. One of them is presumed to have COVID-19. (File photo)

The person who’s presumed to be infected with COVID-19 at Baffinland’s Mary River mine tested negative when they first arrived in the territory on June 23.

The mine flies up around 400 workers every two weeks, about half from their western transfer hub in Edmonton, and the rest from a transfer hub in Montreal, to rotate into their shifts.

The person in question came from western Canada. The mine’s protocol is to re-test everyone five days after they arrive. The second test on this person was done on June 29, and the positive result was discovered on June 30.

“The individual tested on the low end of the infection spectrum,” said Tim Sewell, senior director of health and safety for Baffinland’s Mary River mine, over the phone from Oakville, Ontario.

Although the person tested low and was asymptomatic, they were treated as if it was a “full-on positive test,” Sewell said.

They tested positive again on July 1, and that’s when the GN was notified of the presumptive case.

The person was isolated and contact tracing was done. Eight other people were thought to have come into contact with the potentially infected person, and they were also isolated, Sewell said. Earlier, the GN had said that 12 people were placed in isolation after contact tracing.

The eight people have been re-tested too, and those results were to have been available last night, on Thursday, July 3.

The mine is consulting with infectious disease specialists who say it’s very unlikely the person who tested positive will be contagious, said Sewell, but he said the mine is taking every precaution.

“This is not something that anybody wanted to happen,” Sewell said.

“Mining is considered an essential service and we have a partnership with everybody.”

The mine secured a lab at the mine so they can test employees as soon as they arrive at the airport, and regularly after that. They’ve also chartered flights so their employees don’t have to fly through international airports.

In addition, Baffinland changed the rotation schedule its employees are on. Normally shifts are two weeks on, two weeks off. Now employees stay for 28 days, and have 28 days off, with new people coming in every two weeks.

This is the busiest time of year for the mine—ships will start to transport boatloads of iron ore out to be processed. Because of this, Sewell said there are more people at site than usual, between 700 and 750 right now.

Because mine workers are classified as essential, they don’t have to self-isolate before entering the territory.

“We completely respect the severity of this pandemic and we’re tried to accommodate it as such.” Sewell said.

“It’s hard work and we want to make sure we get it right.”

The person who tested positive is waiting for test results to come back from Ontario. The results are expected to arrive in Nunavut early next week. If these are also positive, Sewell said they will take advice from Dr. Michael Patterson, Nunavut’s chief public health officer, on what to do next.

If there was an outbreak of symptomatic cases in the mine, Sewell said Baffinland would consider an evacuation.