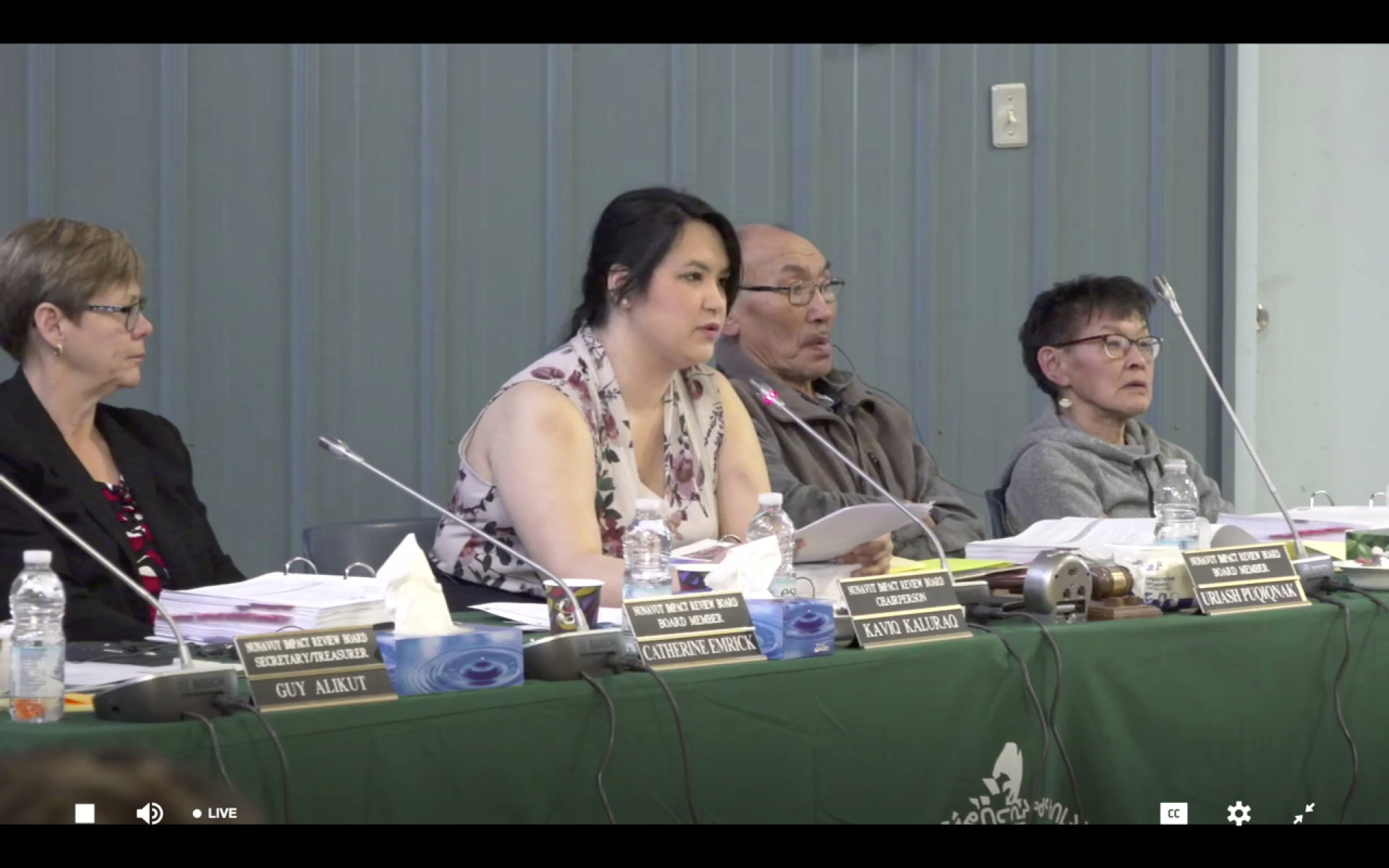 Marjorie Kaviq Kaluraq (third from the right), the chair of the Nunavut Impact Review Board, with board member Catherine Emrick on the far left of the photo, and on the right, board members Uriash Puqiqnak and Madeleine Qumuatuq at the board’s public hearing in Iqaluit this weekend. (Screen shot)

The Qikiqtani Inuit Association, which controls most of the land occupied by the Mary River iron mine, refuses to endorse or support the mine owner’s railway-based expansion proposal, says the organization’s president, P.J. Akeeagok.

Following a special board meeting held on Oct. 30, the QIA dropped this bombshell declaration into the hands of the Nunavut Impact Review Board in the form of a letter on Nov. 1, just before the start of the review board’s final public hearing in Iqaluit on Baffinland’s phase two expansion proposal on Nov. 2.

At their special meeting, QIA board members voted unanimously to take that position, Akeeagok’s letter said.

“Many of QIA’s environmental and cultural concerns regarding Baffinland’s Phase 2 proposal have not been adequately resolved. We are also concerned that there are issues raised by impacted communities that have not yet been addressed,” QIA said.

However, QIA stopped short of saying the NIRB should recommend the federal government reject the project.

But Akeeagok did say QIA is “specifically sensitive” to what it has heard from Pond Inlet, the community that’s affected most by the Mary River iron mine.

In that community, the Hamlet of Pond Inlet has already declared its opposition to the phase two expansion proposal in its current form.

“We ask that the Phase 2 Proposal not be approved until such time as Baffinland can demonstrate that it can meet employment targets, follow through on its renewed commitment to IQ in its research, monitoring, mitigation practices and consultation with the community,” the hamlet told the NIRB on Sept. 20.

In its proposal, Baffinland wishes to build a 110-kilometre railway from Mary River to Milne Inlet, increase production from six million to 12 million tonnes of ore per year, and use up to 176 transits by ore-carrying vessels to take its product to market.

But the Hamlet of Pond Inlet also said the risks of the expansion are too great and the benefits too small.

“We do not believe the project will produce, at this time, net benefits for our community or the north Baffin region,” the hamlet said.

The QIA manages most of the Inuit-owned land occupied by the Mary River mine and effectively acts as Baffinland’s landlord, collecting commercial land lease and royalty payments through its Inuit impact and benefit agreement.

Over the past few months, the QIA has worked with communities affected by the Mary River expansion, including Arctic Bay, Cape Dorset, Clyde River, Hall Beach, Igloolik, Kimmirut and Pond Inlet.

That includes multiple meetings, including a meeting with hamlet representatives held on Oct. 7 in Iqaluit, Akeeagok said.

They found that hunters still have serious problems with the 110-kilometre railway that Baffinland wants to build between Mary River and Milne Inlet, and are worried about its impact on caribou migration and travel by hunters.

For that reason, the Mittimatalik hunters and trappers organization also opposes approval of the project.

“MHTO does not recommend approval of the railway or additional mining at this time,” the organization told the NIRB in a Sept. 23 submission.

On Nov. 3, the QIA’s director of lands and development, Jared Ottenhoff, and other QIA representatives peppered Baffinland staff with questions about the company’s approach to Inuit Qaujimajatuqangit.

For example, QIA delegate Alistair MacDonald suggested that Baffinland’s IQ studies do not acknowledge that Inuit in the region have serious concerns about the railway.

The NIRB’s final public hearing on Baffinland’s proposal will run from Nov. 2 to Nov. 6 in Iqaluit and then move to Pond Inlet, where the hearing will continue on Nov. 8 and Nov. 9.

After the hearing wraps up, the NIRB must file a report with the federal northern affairs minister within 45 days, saying whether or not it recommends approval of the project, with a set of recommended terms and conditions.