Baffinland’s railway plans under scrutiny at review board hearing 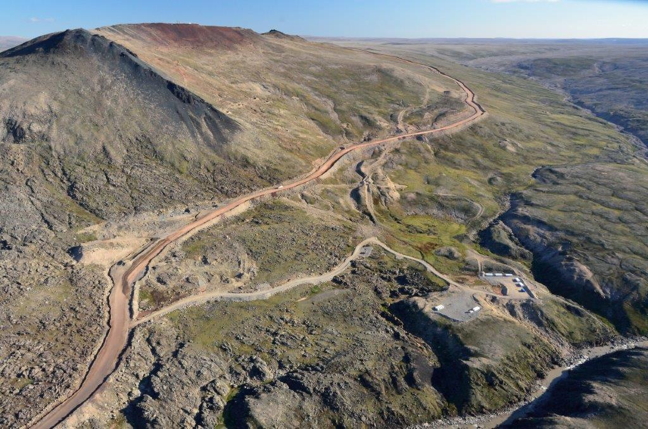 The first deposit of the Mary River mine is pictured here in 2015. The proposed second phase of development on the mine would see 12 million tonnes of iron ore produced annually and moved by rail to the Milne Inlet port. (Image courtesy of Baffinland Iron Mines Corp.)

Questions about the environmental impacts of Baffinland Iron Mines Corp.’s proposed railway dominated discussions on the third day of a hearing by the Nunavut Impact Review Board in Iqaluit on Monday, Nov. 4.

The 110-kilometre rail line would run from the mine site to the company’s port at Milne Inlet, closely following the existing tote road.

It’s one of three routes originally proposed, and not the one preferred by nearby communities, which was rejected by Baffinland after internal consideration.

“There is no other viable route we are investigating at this time,” said Lou Kamermans, Baffinland’s director of sustainable development.

Baffinland says that one environmental benefit of the railway is that it will produce less dust than what’s being churned up by trucks driving along the tote road.

There are two reasons for this. First, because of the train’s capacity, the ore won’t have to be crushed as much to be transported, so less dust will be released along the route. Instead, ore will be crushed once before the haul and then once again at the port site, to be loaded onto ships in a sellable state.

The second reason, Kamermans explained, is that their studies of dust release have shown that the majority of dust comes from tires kicking it up from the road. An elevated train track wouldn’t have the same effect.

Baffinland submitted its report on its preferred railway alignment to the NIRB on Oct. 15. The short timeline before hearings began on Nov. 2 drew significant criticism from intervenors over the first three days of the hearing.

Baffinland’s proffered route closely follows the current tote road, except for a deviation put in place because of sharp corners and a steep hill. The community of Pond Inlet has raised concerns that this route would pose a problem for caribou.

“We are committed to seeing that this railway does not impose the barrier they thought it would in submissions to the Nunavut Planning Commission,” Kamermans said.

Those measures include slopes up to the railway constructed at an angle scalable for caribou, and an even more gradual slope when the embankment is above 13 metres high. Mike Setterington, a consultant for Baffinland, called it more gentle than a set of stairs.

Setterington explained that these measures came out of caribou studies done at other northern mines, including Agnico Eagle and Hope Bay. They also discussed with community elders the behaviour of caribou on different terrain.

Baffinland’s plan includes level crossings for people and caribou (the priority being people on snowmobiles), as well as culverts for passing through.

According to Baffinland, 66 per cent of the planned rail is crossable for caribou without any further changes.

On the operations side, Baffinland said it would stop all trains when caribou are on the tracks and proceed cautiously when they’re within 250 metres.

Susan Leech, a consultant with the Qikiqtani Inuit Association, questioned whether the response of caribou to the sounds, smells and ground disturbance of a railway could really be predicted.

She also questioned whether the caribou would actually make use of the crossings and culverts.

Leech noted that if Baffinland went ahead with already approved plans to build a southern railway corridor to Steensby Inlet, its railways would stretch a total length of 300 kilometres, bisecting the northwestern tip of Baffin Island.

She asked whether there’s anywhere else that has a railway of similar length, and with a caribou herd with such low population and limited migration as what’s found on Baffin Island.

Setterington said there are no direct comparisons.

Monitoring of caribou in the area has dropped off over the years of mine operation because of the low population. Setterington described three-day aerial surveys where they’d spot only 22 caribou.

But once the caribou population rebounds, Setterington said they’ll be able to monitor how they interact with the project.