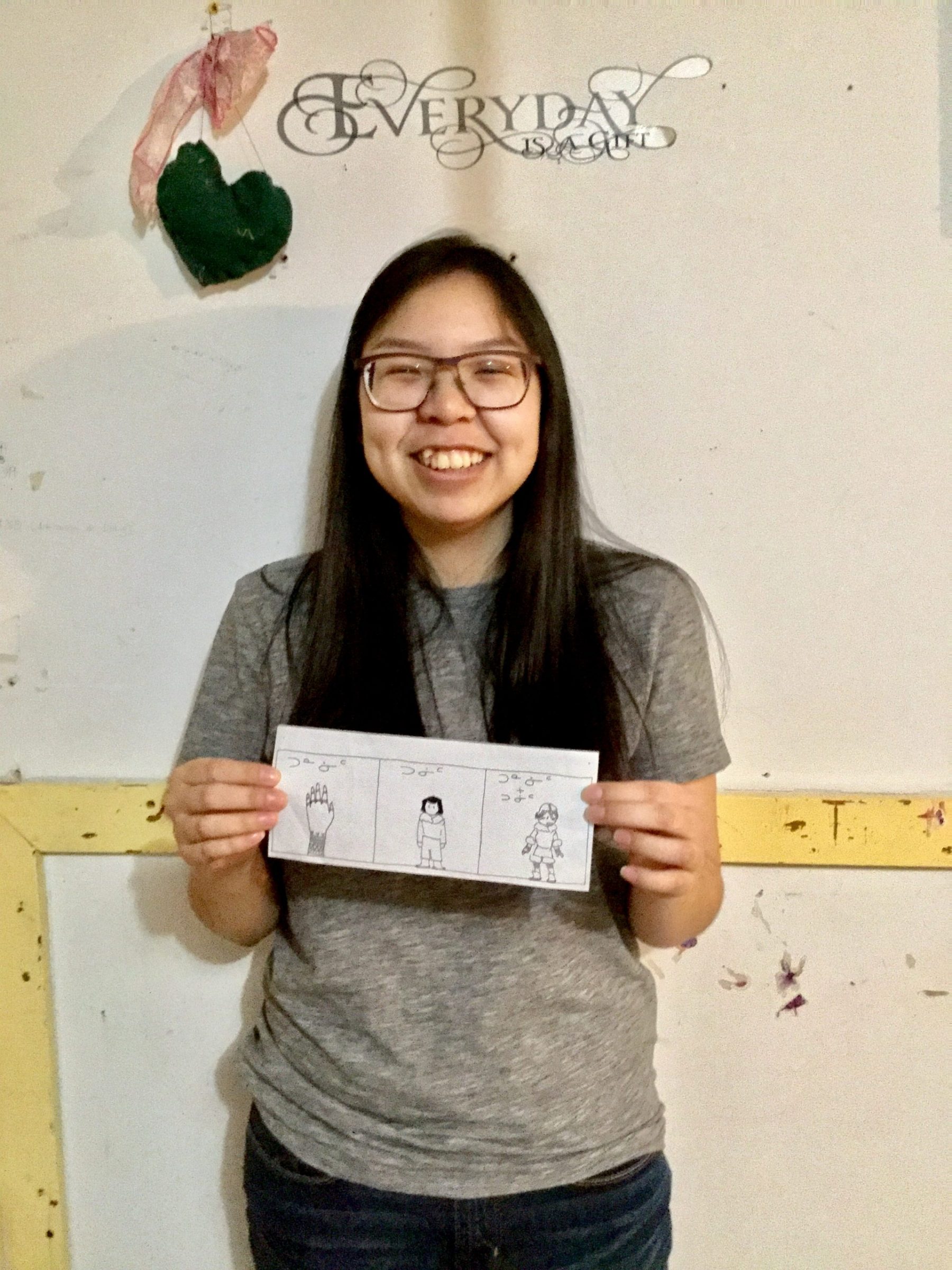 Ayla Kreelak, a student at Jonah Amitnaaq School in Baker Lake, holds a comic that she drew. (Photo submitted by Alya Kreelak)

A Baker Lake high school student who turned heads with her daily comic takes on small town life has stopped posting drawings since Nunavut went into its most recent lockdown.

Ayla Kreelak, 19, doesn’t have regular access to internet, but that didn’t stop her from sharing her comics at the beginning of the school year. She chose a corner in the corridor of Jonah Amitnaaq School and started to post her drawings every day.

“A lot of them have been inspired by my friends,” the Grade 12 student said.

“We hang out a lot and come up with jokes, and I’m like, ‘Hey! Maybe I should share these with other people.’”

Kreelak started sharing the drawings at the encouragement of her English teacher, David Applebaum.

He thought she was going to post one every three weeks or something, but said, “she [did] it every day.”

Students started to expect the comics, Applebaum said. He’d see them going to check out Ayla’s Comic Corner every day.

“They’re local jokes, or inside jokes for Inuit,” Kreelak said.

Kreelak started getting serious about drawing when she was 13, and started making little comics two years ago, after the debut of Snowguard, an Inuk hero from Marvel Comics.

“It made me realize all the possibilities of what an Inuk comic could do,” she said. “That was really amazing to see.”

Schools closed for the second time since the beginning of the pandemic, and Ayla’s Comic Corner closed down too.

Kreelak took home a learning package. Though she found the work easy, she said the period was “really tiring mentally.”

So when schools reopened in early December, she didn’t go back to making comics.

“I enjoyed drawing the characters that I made for the comics,” she said, “but having to come up with three to five comics per week is pretty tiring right now.”

Along with that, Kreelak can’t see her two closest friends, so she doesn’t have her usual inspiration for the drawings.

That’s because she and her classmates have been divided into cohorts, to prevent the schools from being crowded.

Kreelak’s in the blue cohort, and her friends are in the red one. They go to school on alternate days. It’s not safe to visit after school because one of her friends lives with her grandparents.

“If COVID ever came to Baker I would never want to risk giving it to her grandparents,” she said.

Despite this, Kreelak was still excited to go back to school when the lockdown lifted in early December because there is a graphic tablet there that she uses to make digital drawings.

She’s not making comics, but she is improving her art skills — “doodling and things like that.”

Along with that, Kreelak is looking to the future. She wants to go to college to become a graphic artist.

There are three colleges that she’s interested in attending. Kreelak plans to spend the holiday break applying and saving money.

While Kreelak appreciated the outlet her daily comics allowed, she wants to find a way to post her work online, to her Instagram account. She wants to connect with other graphic artists out there, to talk about her work and share ideas.