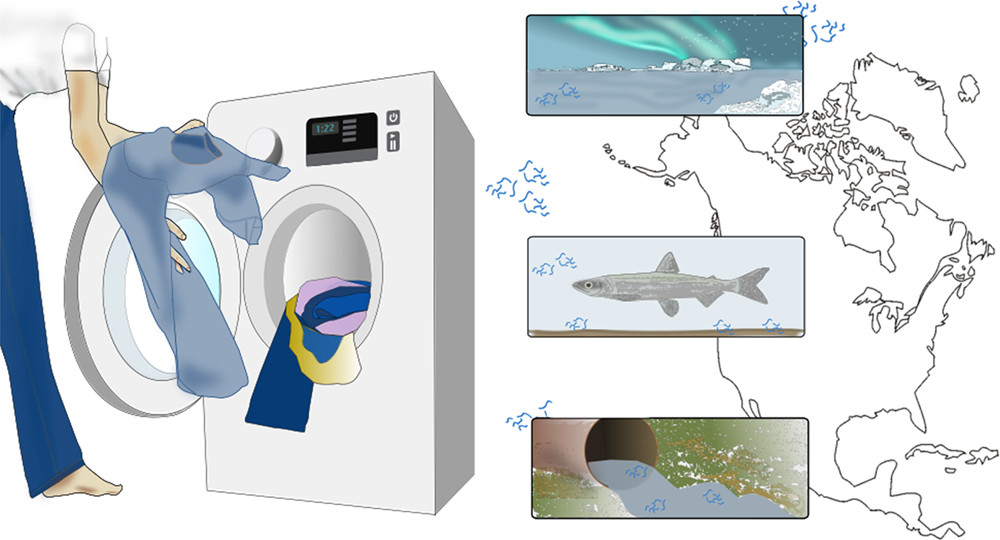 A team of researchers from the University of Toronto concluded that blue jeans are yet another indicator of the widespread burden of man-made pollution in the Arctic.

That’s because blue jeans add “significantly to the environmental accumulation of microfibres from temperate to Arctic regions,” they said.

When you wash blue jeans, you probably think more about getting them clean than contaminating the environment.

But the researchers found that indigo denim microfibres accounted for up to 90 per cent of man-made particles found in sediments in the Laurentian Great Lakes, along the United States-Canada border and in shallow, suburban lakes in southern Ontario.

Some rainbow smelt in the Great Lakes had also absorbed the microfibres.

Researchers spent time on board the CCGS Amundsen research icebreaker as it travelled throughout the Canadian Arctic, where they found indigo denim microfibres accounted for about 20 per cent of all microfibres analyzed.

Denim microfibres were even prevalent in Arctic marine sediments collected at depths of about 1,500 metres, indicating that “these fibres are sufficiently persistent to undergo long-range transport from southerly source regions to accumulate in remote regions.”

Blue jean denim is made up of “natural cotton cellulose fibres, processed with synthetic indigo dye and other chemical additives to improve performance and durability,” the researchers said in their study.

As part of their study, they examined the footprint of these fibres by investigating their environmental distribution, their transport pathways and the sources of indigo denim microfibres shed by denim clothing.

It’s not a surprise that there are a lot of these microfibres around: The researchers found that a single pair of used jeans can release roughly 56,000 microfibres per wash cycle.

So, assuming that each load contains one pair of used jeans, they estimated that the average Canadian household would release between 10 and 13 million indigo denim microfibres from washing blue jeans annually.

Despite the manufacturers’ recommendation of monthly washing, the average Canadian washes their jeans after wearing a pair twice, they said.

“Thus, our findings expose a new front in the challenge of microfibre pollution, ‘natural’ fibres,” they said in their study.

“Here we show, for the first time, that blue jeans, the world’s most popular single garment, have a widespread geographic footprint in the form of microfibres in aquatic environments from temperate to Arctic regions.”

Solutions to curbing this Arctic contamination could include washing jeans less often or putting filters on washing machines.