Cabins located at the mouth of Sylvia Grinnell River near the West 40 area of Iqaluit. A city councillor callled the number of cabins springing up near there “embarrassing.”(Photo by David Venn)

A “free-for-all” of cabin building at Sylvia Grinnell River has become a bit of an eyesore, says Iqaluit Coun. Simon Nattaq.

He spoke at a planning and development committee meeting Tuesday evening, where a few cabin owners came to watch councillors discuss the next steps of an impending policy on building cabins on city grounds.

“Where the fish gather shouldn’t be occupied,” Nattaq said in Inuktitut through an interpreter, adding there are about 35 cabins further up Sylvia Grinnell River. 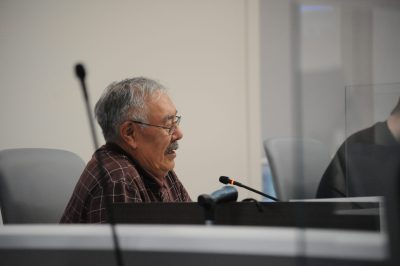 “It’s almost embarrassing to see all the materials and cabins that have been built.”

Planner Samantha Toffolo, who presented a memo to council on the matter, said the river wouldn’t be included in the city’s policy but that planners will need to consult residents and councillors on the potential need for a buffer between major waterways and where cabins can be built.

In the Sept. 20 memo, Toffolo outlines guidelines a new policy may have. It includes the city potentially having:

Issues the city faces with cabin construction include noise, littering, impacts to areas intended for public use and municipal enforcement being unable to get to building sites.

Also, there are no leases for cabins, meaning the city doesn’t know who owns which cabin and has no way of contacting owners to address issues with cabins, she said.

One of the bigger challenges of adopting a new policy involves how to treat existing cabins, of which there are 50 to 60, Toffolo said.

“Some cabins located in unsuitable areas may need to be relocated or removed regardless of when they were constructed,” she wrote in the memo.

She added that until a policy is introduced, the city could request “more immediate removal” of structures that were built after councillors passed a moratorium on building cabins in July 2020.

She said there’s division among residents who participated in the city’s consultations over whether or not cabins should be allowed in Iqaluit.

There’s support for regulation because residents don’t want cabins to impact their use of the land.

During the meeting, Toffolo said the next step will be a consultation at the Nunavut Trade Show on Thursday, among other consultation days.

She said she expects a policy to be ready by February.