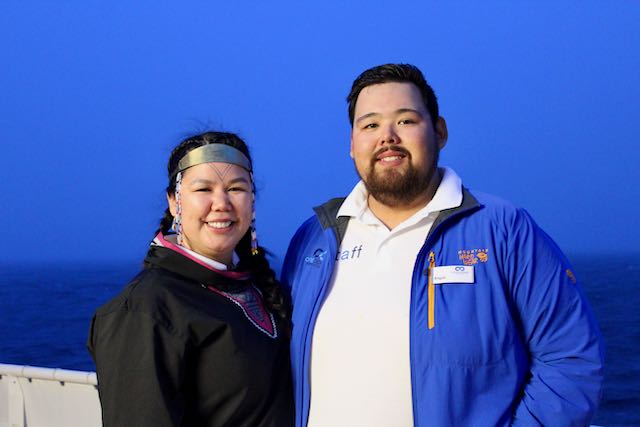 Candace Pedersen and her husband Angulalik stand at the back of the RCGS Resolute on Wednesday, July 31, during a One Ocean expedition currently sailing around southern Baffin Island. (Photo by Emma Tranter)

As the RCGS Resolute sails out of Frobisher Bay, Candice Pedersen stands in front of the crowd of 80 passengers to give a presentation on Inuit culture.

She is wearing a brass headpiece with beads hanging from the ends— made by her brother for her wedding day.

Pedersen and her husband, Angulalik, are part of the One Ocean Expedition staff running an arts and culture–themed expedition around South Baffin Island from June 30 to Aug. 9.

Pedersen grew up in Iqaluit, while her husband grew up in Kugluktuk. The two met while studying at Nunavut Arctic College’s Iqaluit campus.

They married two years ago. Pedersen shows the audience a photo of her and Angulalik out hunting in Cambridge Bay. In the photo, she is dressed in a sealskin parka her mother sewed for her.

“My mom is an amazing seamstress. I actually drew what I wanted on a sticky note and she made it for me,” she says.

The couple, who now live in Cambridge Bay, have sailed on One Ocean’s Arctic expeditions for the last four years.

One Ocean’s Arctic cruises always have Inuit staff on board, Pedersen explains.

During this particular expedition, the RCGS Resolute will visit several communities during the voyage, including Kimmirut, Cape Dorset and Coral Harbour.

Most of the expedition’s passengers have never been to the Canadian Arctic. And many are from other countries, including Germany, Australia, New Zealand and the United States.

“I kind of wasn’t sure what to put in this presentation … because I live this every day and I wasn’t sure how much you knew,” Pedersen tells the crowd.

At 26, Pedersen says she has witnessed huge shifts in Inuit lifestyles in Nunavut.

“My mom grew up on the land with a dog team. A handful of people still use dog teams but most people use snowmobiles. My mom and my dad grew up in igloos and I grew up in a house that you would see today.”

Pedersen says her mother grew up just outside Resolute Bay and spent much of her time out on the land.

“The technology era has come in very quickly and it’s changing dramatically from my mom growing up in an igloo to me growing up with technology. Lifestyle for Inuit has changed dramatically,” she says.

Despite those changes, Pedersen says she believes young Nunavut Inuit will continue to keep their culture alive.

One of her favourite things to do back home, she says, is hunt with her husband.

“Sustainable hunting is very important to Inuit. It’s what we’ve done for generations. It’s what our ancestors have done. And it’s a way of also healing a little bit,” she says.

She passes around her sealskin parka, stopping to pose for photos with passengers who want to try it on.

“Winter is cold. I’m not sure how you feel about sealskin products, but that’s what keeps us warm,” she tells the audience.