Cambridge Bay firefighters unable to save house consumed by fire

“The first total loss of a structure in years” 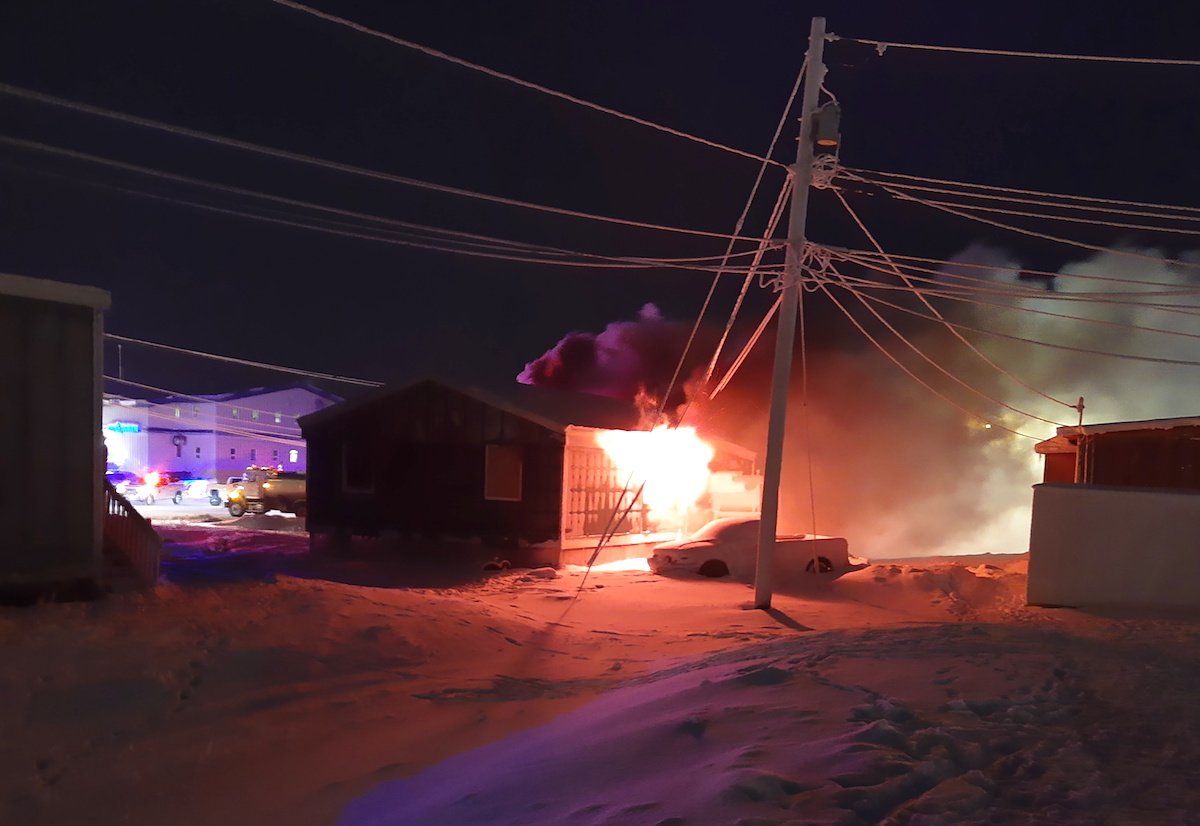 Smoke and flames pour out of the windows of a house during the evening of Dec. 1 in Cambridge Bay. Firefighters were unable to save the house because the fire entered the walls and roof. (Photo courtesy of Richard Webster)

A fire has destroyed the home of a Cambridge Bay family, five of whom were inside when firefighters got the call just before 8 p.m. on Tuesday, Dec. 1.

It was the largest structural fire that the western Nunavut town had seen in years, said Cambridge Bay’s fire chief Keith Morrison — and “the first total loss of a structure in years,” he said.

No one was hurt in the fire, although those who had been inside when it first broke out and inhaled smoke were sent to the health centre as a precaution, Morrison said.

Before the fire, residents Nancy Angulalik and Danny Mala had already put Christmas gifts under the tree for the littlest children in the family, aged two to eight, and a banner spelling out “Christmas” was hung across the living room, according to pictures posted on social media.

Now these decorations, gifts and all their possessions are gone.

“When we got the call, flames were already coming out of the house,” Morrison said.

When the firefighters arrived, they made sure everyone was accounted for, he said.

And they then spent six hours in -20 C temperatures fighting the blaze.

“We couldn’t get into the structure, although it was controlled the whole time,” Morrison said. “It was easy to determine quickly that the house was a write-off, and we weren’t going to risk anyone for a structure that wouldn’t be saved.”

A loader ended up pushing down what was left of the house, owned by the Cambridge Bay Housing Association, on Dec. 2.

“The fire had gotten into the walls and roof so the structure was comprised,” Morrison said.

As for the cause of the fire, that is still under investigation, he said.

The day after the fire, Morrison issued a special message to thank his 15 volunteer firefighters.

“What they do when they answer the call is important, and what is most important to me is making sure they walk back in through that door at the end of the day,” he said.

Morrison also thanked “the husbands, wives, partners, children, parents, and other family members who watch their loved ones go rushing out the door.”

And the Municipality of Cambridge Bay thanked Morrison and all the members of the fire department.

“You show up in the cold and the dark and the late evenings when all you want to do is to be cozy in your own home with your families,” said senior administrative officer Marla Limousin.

Many in Cambridge Bay, which has a population of roughly 1,800, have already responded to a collection of clothing donations and other needed items for the family.