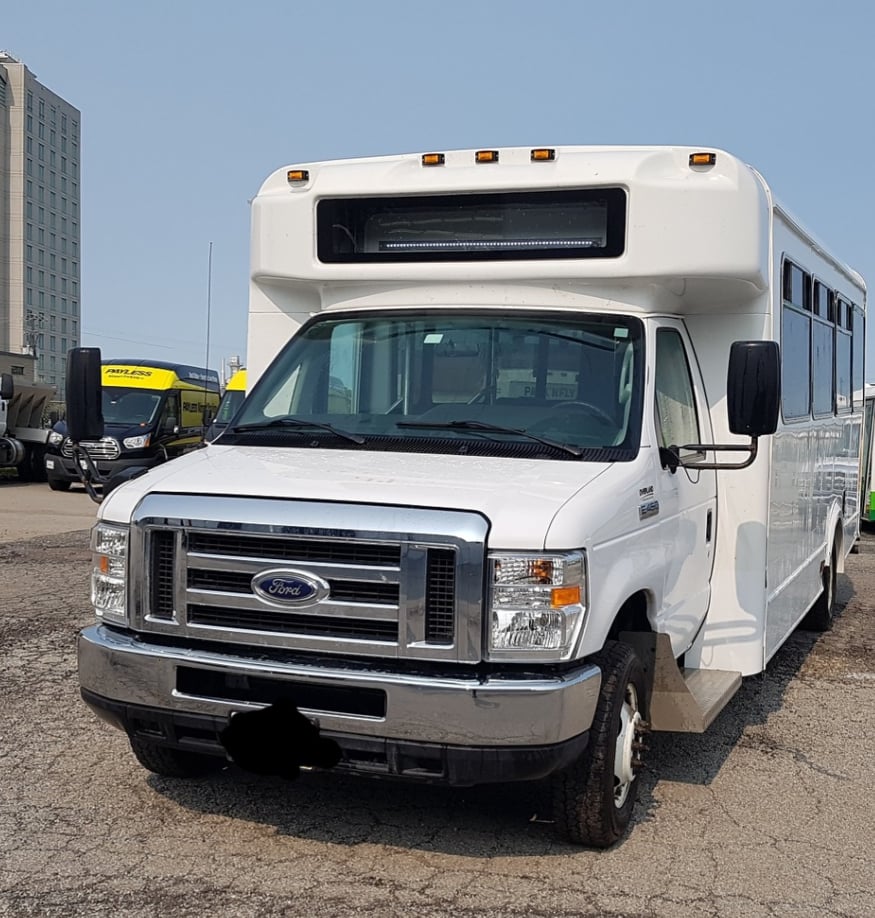 Ziggy’s Enterprises’ new 17-seater bus, pictured here, is at the Becancour Port in Quebec. It is expected to be in its new home in Cambridge Bay on Sept. 2. (Photo courtesy of Charles Zikalala)

Ziggy’s Enterprises is hoping to begin running by October

That’s why Charles Zikalala, owner of a freight and taxi business called Ziggy’s Enterprises, has started a bus service that will begin operating in the fall.

“I’m hoping that I’ll be able to fill in the gaps in terms of transportation and some of the challenges we have in this community,” he said.

He got the idea when he considered that taxi services in Cambridge Bay may not be able to meet the growing demand of the hamlet.

“With a bus service, there will be [consistency] and community members will know that even if taxis are not available, they know that there’s going to be a bus passing by,” he said. “They can rely on that.”

It’s a pilot project right now. The airport shuttle-type bus will arrive on Sept. 2, he says, and he’s hoping to get the service running within the following four weeks.

He says although he has the support from the community, there are still some barriers he’s expecting to face.

For example, the hamlet has no bus stops. Zikalala says he got permission from Qulliq Energy Corp. to place the bus stop signs on its light poles, but he thinks conditions will be too harsh in the winter to stand outside.

Corey Dimitruk, owner of Go Cargo Taxi Ltd. — one of the other two taxi services in town — said he thinks the bus service has the potential to be a positive for the hamlet and that it won’t affect his business.

“What’s good for the community is good for us,” he said. “You’ve got to encourage new ideas and you got to be behind people with those ideas.”

Cambridge Bay Mayor Pamela Gross said the hamlet is in full support of the service.

“The bus service is one that our community is embracing,” she said. “I know it’s one that residents have brought up, and we’re happy that a company in the community is willing to and going to provide this service for residents.”

Thinking ahead before the bus hits the ground in Cambridge Bay, Zikalala says next year he wants to meet with the Department of Education to discuss transportation services for students, who sometimes have to walk to school in extreme cold.

There used to be a bus for elementary school students who live a certain distance away from the school, but it didn’t run last year and may not run again this upcoming year, Gross said.

“Even if it’s not me providing that bus service for the elementary and the high school students, if somebody takes that on, that’s great,” Zikalala said. “It’s an initiative I would like to see in the community.”