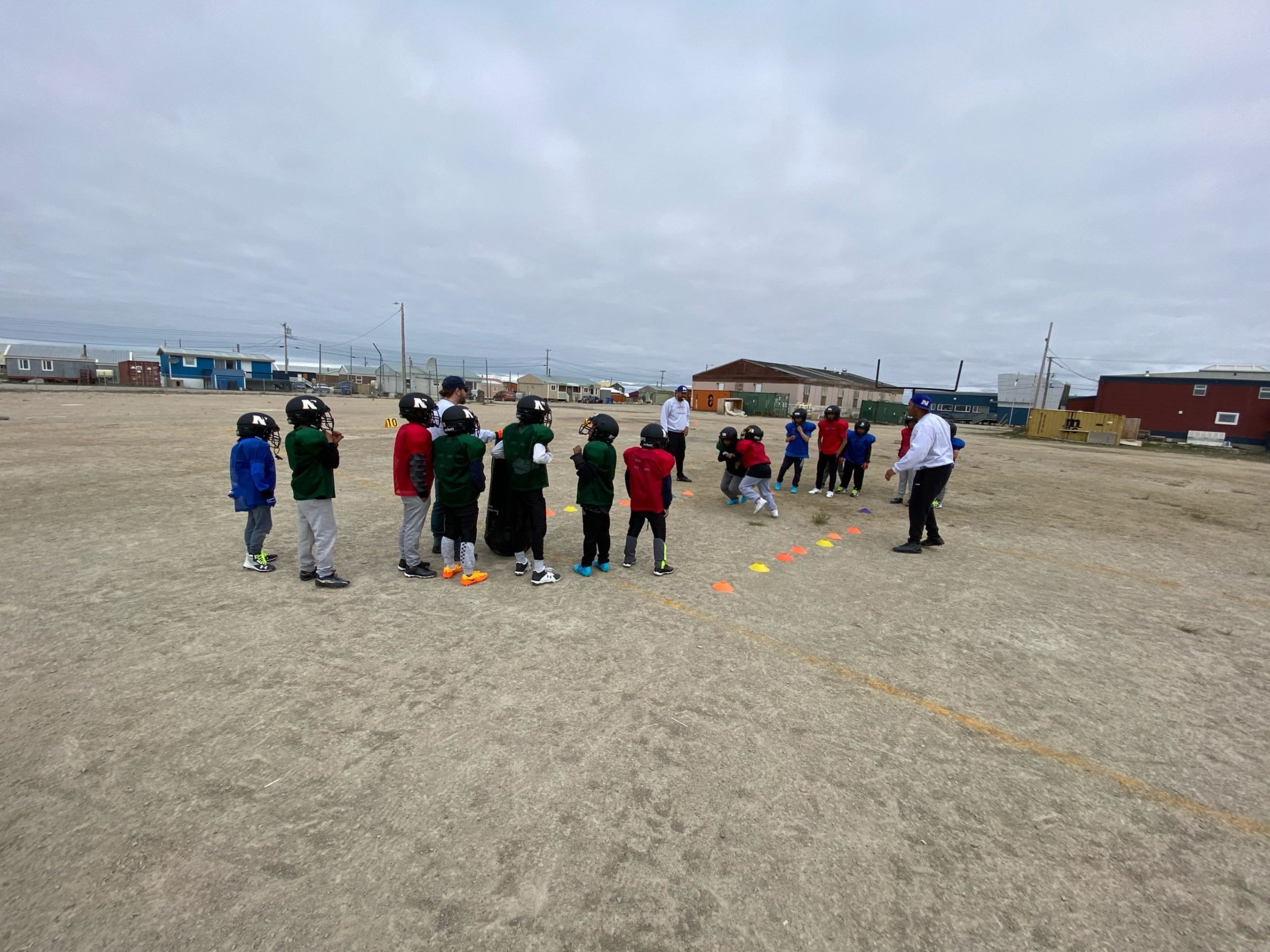 Instead, a 55-yard plot of dirt and gravel behind the high school serves as the ground where young people can run touchdowns and play in a community flag football league.

This week, that’s where 18 Cambridge Bay boys and girls are gearing up with pads, helmets, gloves and cleats as they take part in a first-of-its kind full-contact tackle football camp.

And they’re getting help from Eddie Steele, a former Canadian Football League player, as one of the coaches.

Joel Evans, who works as a miner and serves as president of Nunavut Football, has been organizing flag football for kids in Cambridge Bay for several years.

A former high school football player himself, he said he felt it was time for some of the kids to experience the faster, more physical version of the game.

The camp started July 17 and runs until July 25. Evans handpicked the participants — 16 boys and two girls, all between the ages of eight to 13 — based on who he felt was ready to make the step up from flag football to tackle.

He organized the camp with the help of his wife and mother-in-law, along with financial support from several businesses and Kitikmeot regional organizations.

Wanting the players to learn from a well-experienced coach, he called Steele, his high school friend, and asked him to fly north from Edmonton to help lead the camp.

Steele played defensive tackle for three CFL teams during his near-decade in the league, and won the 2015 Grey Cup with the Edmonton Eskimos (renamed Edmonton Elks in 2021).

“That was awesome for him to be willing to come here, leave his family for a week, and come teach these kids more about football because his background is somewhat vast and his experience is way more than mine,” Evans said of bringing Steele on board.

For Steele, coaching in Nunavut is a new experience, having never previously visited the territory before arriving this past weekend.

He said he’s taking in the culture and the land, and feels very welcomed by the community. He has also enjoyed letting the kids try on his Grey Cup ring.

In getting them geared up for full contact football, Steele said the biggest adjustment for them has been putting on the heavier equipment.

“Brought me back to my days, I remember how much it hurt and how heavy it felt on your neck. So I think, overall, that was the biggest adjustment, just getting to put on proper equipment for the first time.”

A day in the camp starts with some stretches and warm-up, followed by learning football skills such as passing and tackling.

At the end of the camp, the kids will split up into smaller teams for a mini tournament, followed by an awards celebration.

Evans said it’s been inspiring to see how dedicated the players are to the camp, ready to work hard and compete.

“They’re not being told to come to this football program, they’re just showing up,” he said. “Everyone’s just pitching in.”

Beyond the camp, both Steele and Evans see what the kids and the community can gain from this football experience.

“If, one day, one of these kids can go to the next level, even university or something like a football scholarship, that would be just amazing,” Evans said.

He also wants the plot of gravel that’s being used as a field to get noticed, so the community can receive funding to build a proper turf.

“It goes beyond football, I think the amount of activity that people in the community can do on this type of field would be amazing because there’s no grass here,” Steele said.

“If there was some fake [turf] put in, it’s going to last, and the community is going to be able to do so many different things.”