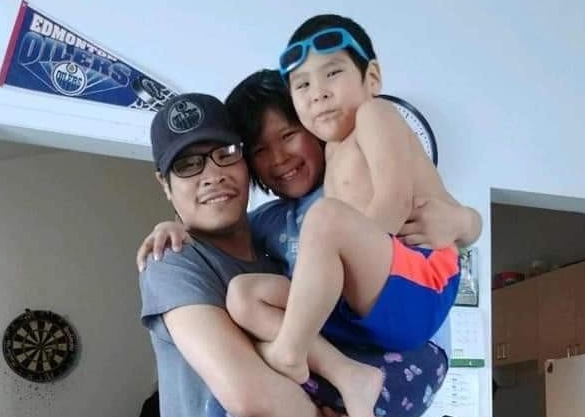 Robert Maksagak poses with two of his children, Faye and John, in late August. (Photo courtesy of Mary Rose Maksagak)

Robert Maksagak liked to play with hockey cards when he was kid.

“He was a very kind-hearted soul,” said Leslie Panioyak, childhood friend of the 39-year-old who died in an apparent homicide in Cambridge Bay Sept. 10.

“He didn’t want anything but the best for everybody and he always helped people. He loved his children very much … I will be missing him a lot.”

She says although she and Robert parted ways as they grew up, she planned a moment of silence for her old friend on Tuesday night. Across the hamlet, people took a moment to remember him and say a prayer for the community.

Robert’s partner, 20-year-old Jada Nulliayuk, is charged with second-degree murder in his death.

His mother, Mary Rose Maksagak, said her son was always there for people.

“If anybody needed help, he was there,” she said.

Robert worked odd jobs for the majority of his life, most recently operating a water truck for the hamlet.

He loved playing sports — specifically hockey and basketball — and would hunt and skin caribou on family trips. He was a twin, and the youngest of six children.

Robert grew up and went to work with his father, Harry Maksagak, at Lupin gold mine on the border of Nunavut and the Northwest Territories.

Harry said when Robert was younger, he was always curious about what his dad did for work and said he wanted to join him one day.

“The mining industry is like any other place, some people are cut out for it and some people are not,” Harry recalls telling his son, warning that his office was 3,500 feet underground.

After working at Lupin mine, Robert worked at the Hope Bay mine briefly before deciding to come home to be with his family.

“Things turned a little bleak at home,” said Harry. “He decided … ‘My kids are calling and they’re wanting me, so I’m going to go home and stay home.’”

Harry recalls that Robert thought if he eventually carried on with mining and attended college after the pandemic, maybe he could make it to an executive position, and this might make his dad proud.

Harry told his son he was already proud of him, for making decisions with other people in mind.

“I will always hold that to heart that he said to me one day, ‘I will make you proud, dad.’ And I’ve been proud of him all along,” Harry said. “I sure treasure that remark.”

Robert had five children, all from a relationship previous to Nulliayuk.