No charges can be laid because children involved are under 12 years, police and fire officials say 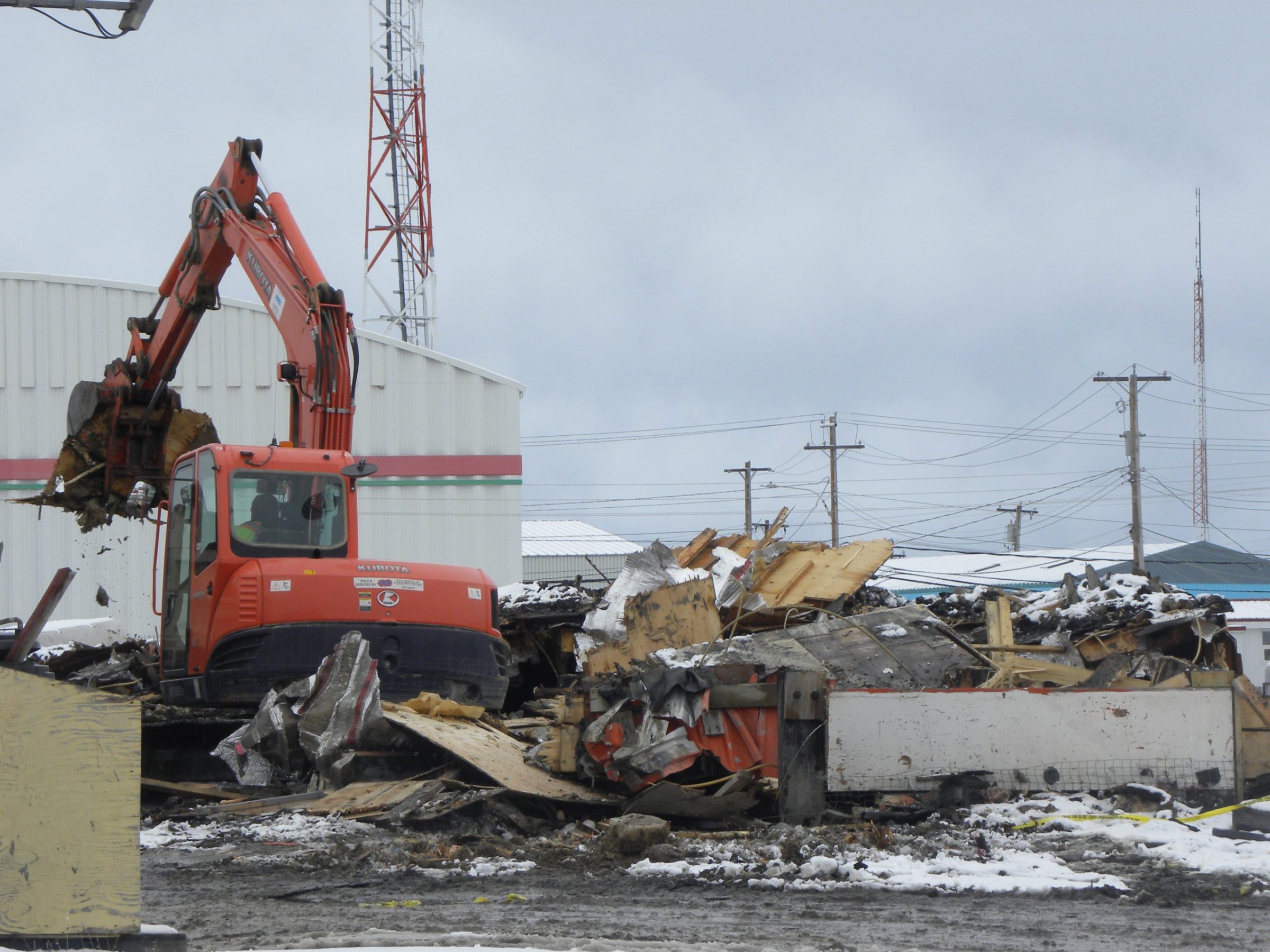 An excavator removes rubble from the site of Cambridge Bay’s former youth centre on June 7. (Photo by Samantha Crabtree)

Children — under the age of 12 — who entered the Cambridge Bay youth centre and set a fire in an office caused the building to burn down nearly four weeks ago, said the hamlet’s fire Chief Keith Morrison.

Their ages mean they cannot be held criminally accountable, RCMP spokesperson Sgt. Pauline Melanson told Nunatsiaq News, confirming that police believe the fire was started by children. She said “several” children were involved but did not provide a specific number.

The building had been accidentally left unlocked during the early morning of May 23 when the kids entered and set a fire that burned for “several” hours before it was discovered, Morrison said in an interview.

“[It’s] an unfortunate loss due to the actions of some kids who may or may not know better. It’s unfortunate that [the] community has had to deal with this sort of thing,” he said.

The fire department arrived at the youth centre at around 8:30 a.m. on May 23 after a hamlet employee doing morning building checks reported a fire.

The building burned down, and at around 5:30 p.m., firefighters extinguished it.

On June 7, the hamlet began getting rid of the building’s remains.

RCMP posted on social media on May 25 that there would be no criminal charges laid, but did not provide a cause of the fire.

“There are no criminal charges pending or applicable,” it read.

On Thursday, Melanson referred to a section of the Criminal Code dealing with children as the reason charges can’t be laid. Section 13 says no one can be convicted of an offence he or she committed while under the age of 12 years.

Morrison said the community is getting by without the centre, but the impact of the building being gone may be larger in the fall when there’s more demand for it to be used.

The youth centre had opened at 7 a.m. to provide a breakfast program, then again at 12 p.m. for a lunch program. Between 3:30 p.m. to 10 p.m., it served as a drop-in centre for youth to play games and socialize.

Parents are upset that their children don’t have a safe place to play, Morrison said.

“So now their kids, basically, during the day, have really nothing to do, or they have less to do than they had before,” he said.

One of the ways the community was getting by was through the Kiilinik High School, which opened its doors for elementary school students for lunch.

Shortly after the youth centre burned down, the high school served hot lunches for between 60 to 80 elementary school students, said principal Connie Kapolak.

“[Elementary school students] usually go to the youth centre for their lunches, but because the youth centre burned down, we decided that we were going to do bagged lunches for them,” she said in an interview.

The hamlet took over the program again on June 7, Kapolak said.