“We are finding a disturbing legacy of sterilization of Indigenous women” 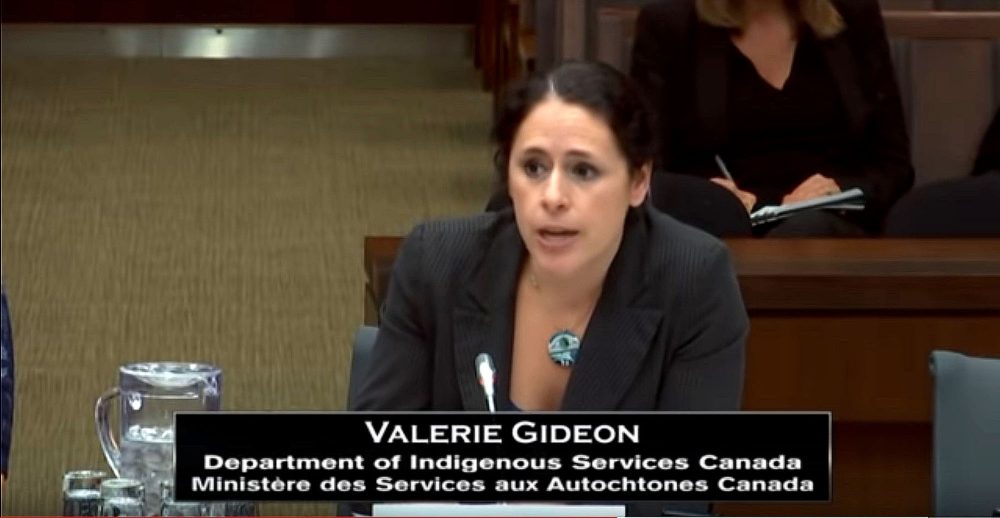 Valerie Gideon, a senior assistant deputy minister with the First Nations and Inuit health branch at Indigenous Services Canada, answering questions at a House of Commons committee hearing this past Dec. 10 on the forced sterilization of Indigenous women. (SCREEN GRAB)

By Erika Dyck
The Conversation

Indigenous women are murdered, go missing or face abuse at much higher rates than non-Indigenous women in Canada. Recent news stories now report that birthing mothers have also been sterilized (given tubal ligations) without their full and informed consent, as recently as 2017.

These shocking stories describe women being told that they cannot see their newborn babies until they undergo a sexual sterilization surgery. And they describe situations in which women who are in the midst of delivering a child are asked questions about wanting more children, without realizing the consequences of their answers. And there are stories about surgery and abortion without consent.

Unfortunately, these are not isolated cases.

I am a historian of medicine, and the author of Facing Eugenics. In this book I traced the history of Alberta’s eugenics program—an official, provincial program that sterilized nearly 3,000 people between 1928 and 1972, largely on the basis of their intelligence scores.

Officially this program concentrated on people with diagnoses that today we might call intellectual disabilities, and IQ tests were used to assess whether or not someone was considered fit enough to parent.

Doing that research, I learned that Indigenous women were not initially the main targets of the program. In fact, they were often denied health-care services of any kind, and suffered some of the highest rates of maternal and infant mortality as a result.

By the end of the 1960s that situation had changed. But as more women gained access to health-care services, they also became the main targets of an official sterilization program. I wanted to know why.

Working with my historian colleague Maureen Lux, author of Separate Beds: A History of Indian Hospitals in Canada, we have been tracking this history. We are finding a disturbing legacy of sterilization of Indigenous women. And, although Alberta and British Columbia had provincial eugenics programs, women across Canada also faced illegal sterilizations that were not part of any official program.

Until 1969 the use of birth control, including sterilizations, was illegal and punishable under the Criminal Code of Canada. Even talking about abortion or birth control could result in fines or jail time.

After that time, the laws relaxed, and sexual sterilization surgeries went from a form of punishment or control to procedures that many women (and eventually men) chose as a voluntary method of permanent birth control. Today vasectomies and tubal ligations are very popular, but they are chosen—not forced.

The case for Indigenous women has not followed the same trend.

Historically, Indigenous women in Canada have faced significant differences in health-care options, including reproductive care. Women living in northern Canada, especially, have long demanded better services in their communities, and resented having to travel far south to acquire basic maternal and infant care.

In the 1960s and 1970s, the federal government recognized how expensive it was to build comprehensive health services in the north, but recommended using birth control, even though it was still illegal at the time. Some women were given experimental Depo-Provera shots, or long-acting birth control, before it was approved elsewhere in Canada.

In other cases, Indigenous women requested access to birth control information as part of their request for better health-care services in general, but were denied these requests.

Indigenous women living in Canadian provinces confronted different kinds of challenges. The Sixties’ Scoop — the forced removal of Indigenous children from their birth parents and adoption by non-Indigenous families — meant that by the 1960s the right to keep children became much more important for Indigenous feminists than the right to use birth control.

In the 1970s as women around the world formed a feminist movement, Indigenous women in Canada joined on their own terms. Rather than burning bras and demanding access to abortion, for many Indigenous women, feminism involved lobbying to keep their children and have access to proper health care.

This does not seem like something they should have had to fight for, given that other women already had these rights. Indigenous activists in the 1970s began referring to the lack of services and the campaigns to use birth control as part of a wider cultural genocide.

Birth control advocates, including federal government employees, defended themselves by claiming that birth control and sterilization were part of a modern woman’s experience, and they were merely extending these services to Indigenous women.

But this logic did not acknowledge the reality that thousands of Indigenous women had already watched their children suffer as a result of a colonial context that created food insecurity, systemic racism and segregation.

A full review must happen

Indigenous children had been forcibly removed from their homes, and we know that the Indian Residential School system further attempted to break those family bonds.

Indigenous women fighting to keep their children was as much an act of feminism as any efforts by non-Indigenous women to use birth control — the matter was one of women getting to choose how to make their families.

Recent news of coerced sterilizations on unwilling Indigenous mothers reminds us that this is not a matter of the past. The Truth and Reconciliation Commission (TRC) recommended a full and separate review of sterilization and child welfare programs.

This must happen; and we must listen to women and make sure to hear their stories on their terms.