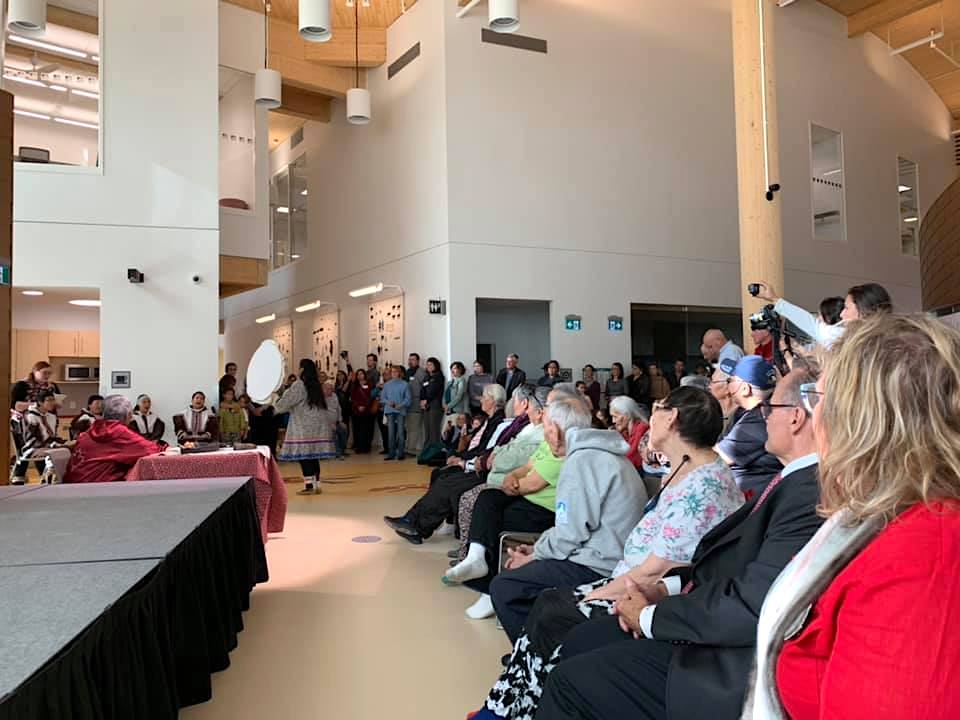 Guests at the Aug. 21 opening of the Canadian High Arctic Research Station in Cambridge Bay listen to drumming and dancing in the large public meeting area of the huge main research building. (Photo courtesy of Mayor Pamela Gross)

The Canadian High Arctic Research Station in the western Nunavut hub of Cambridge Bay finally opened its doors yesterday before a crowd of locals and some visiting politicians and officials.

Not in attendance: Prime Minister Justin Trudeau was originally scheduled to host the official opening, which was to have taken place on July 1, 2017.

During this delay, the cavernous copper-clad facility was shuttered to all but a few.

But many in the community of about 1,800 were invited to attend the Wednesday opening at the lavishly art-decorated main research building. 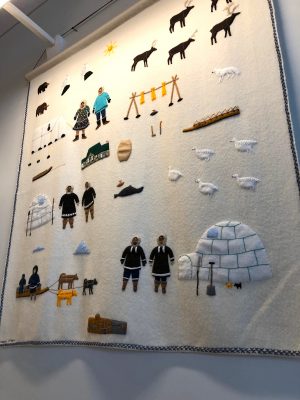 On this mural, made by Cambridge Bay elders and commissioned for CHARS, you can see at the bottom a small image of the CHARS main building. (Photo by Jane George)

“The qulliq is re-awoken and lit on this special day to ensure that our traditional knowledge is passed on, given back when researched, shared amongst our people for years to come and not left in the archives of places like our museums,” Mayor Pamela Gross told those assembled in the large meeting area of the 7,900-square-metre building’s first floor.

The ceremony also featured the Huqqullaaqatigiit drummers and dancers, Ikaluktutiak Aghaliak square dancers and throat singing from the Sounds of Northern Lights.

The community would continue to work with Polar Knowledge Canada, which oversees CHARS, federal and territorial government departments, Inuit organizations, researchers and others “to improve the lives of Cambridge Bay residents, the Arctic, Circumpolar Arctic and the world,” she said.

Also on hand for the opening event were Nunavut MLA Jeannie Ehaloak, former Nunavut MP Nancy Karetak Lindell and Yvonne Jones, parliamentary secretary to the minister of intergovernmental and northern affairs and internal trade, who focused on the scientific mandate of CHARS.

There is space for many things to take place at CHARS: a recent tour of the copper-coloured building revealed numerous large offices, a boardroom fitted with a table long enough to seat 28, and immense, stainless-steel laboratories.

These include a necropsy laboratory for dissections, genomic laboratories and spaces that look like biochemistry labs, all equipped with decontamination showers.

That’s in addition to the public areas that include a round, qaggiq-like space, a broadcast studio and kitchen—all decorated with Inuit art from around Canada.

“We’ve had a lot of interest from organizations from across Canada and around the world who are excited about the opportunities the CHARS campus offers,” Scott said in a news release on the opening.

“Polar research directly affects Northerners, and it makes sense that they’re part of it, from the ground up. The opening today brings us closer to a future where more Northerners are involved in all aspects of research.”

Scott, like many of Polar Knowledge’s staff, still lives in Ottawa.

Announced by Prime Minister Stephen Harper in 2012, CHARS cost an initial $142.4 million to build and a further $46.2 million to complete, and now costs about $7.1 million a year to operate, which is rolled into Polar Knowledge’s budget of about $29 million.

Delays in moving to an official opening for CHARS included major administrative and legal complications.

But today all that is forgotten as the celebrations for CHARS continue with activities for all ages, including the creation of a mural at the entrance of the campus to celebrate the official opening of the CHARS campus..

This will be created with “My wish for the CHARS campus is…” wish cards.

Some visiting exhibits are also on display: the Museum of Nature’s Beneath the Surface, an Arctic fish x-ray exhibit about the anatomy and history of the fish that live in the Canadian Arctic, and Hakalikitak Naotiak Nunaptingni-Butterflies and Plants of our Land.