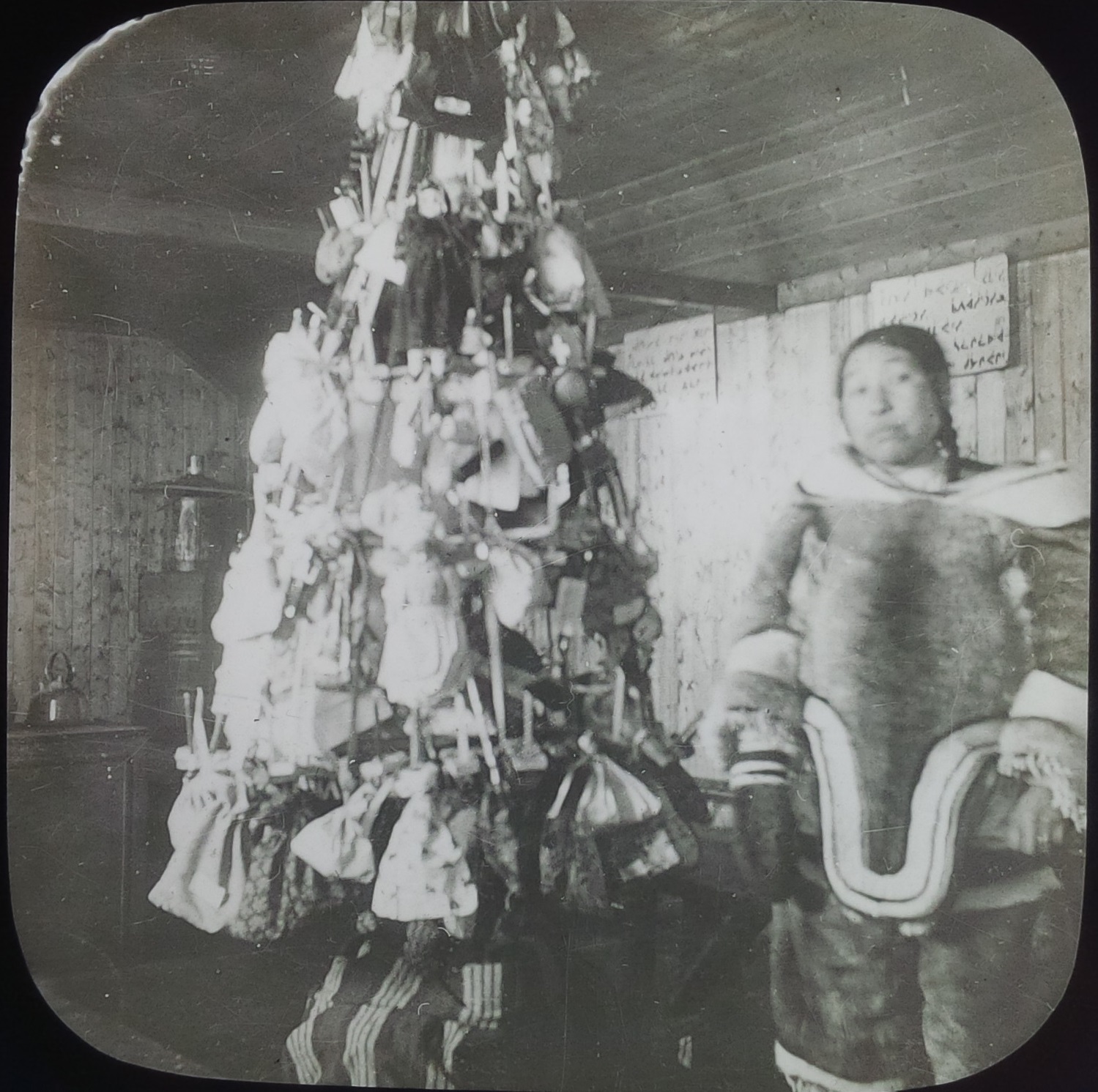 An Inuit Woman stands with Christmas Tree at the Blacklead Island Mission, circa 1900. (Image from the Harper Collection)

The first Christian mission in what is now Nunavut opened at Blacklead Island — across Cumberland Sound from present-day Pangnirtung — in 1894.

Usually, two missionaries from the Church Missionary Society in England were stationed there, but in some years only one; the maximum ever at one time was three.

A whaling station also operated on the island, usually employing two or three Scotsmen. A large number of Inuit lived on or near the island, and many were employed, at least seasonally, by the whalers.

The supply ship, usually a small vessel called the Alert, came once a year. Occasionally a larger steam whaler would put in at the station. This was indeed an isolated outpost. Christmas for the missionaries at Blacklead, as for missionaries everywhere, was a time of joy.

The preachers tried their best to celebrate it in a “European” way, as near to the way it would be celebrated “back home” as they could manage.

Missionary Charles Sampson described his humble attempt at making the season festive in 1897: “At Christmas we gave a feast to the people, consisting of pudding, cake, and coffee or tea, and in the evening we had our Christmas tree, which I made from a description given me by Mr. Peck of the tree which the late Mr. Parker made. [Peck was the missionary who had founded the mission, with Joseph Parker, who drowned on a fishing excursion in 1896, a few weeks before Sampson’s arrival at Blacklead.]

“I used a tent-pole for the upright, and for branches used the hoops from flour barrels, which, when covered with wool, and the whole covered with toys and gifts for the people, and a host of candles, presented a very pretty appearance. There were several presents from kind friends at home, which we used for prizes to our best scholars, and for attendance and cleanliness, the latter prize being Jubilee medals.”

There is no indication of what the Inuit thought of his and Parker’s improvised Christmas trees, but the creations must have caused wonder in a land devoid of trees.

The reference to “Jubilee medals” must be to the thousands of medals given out on the occasion of Queen Victoria’s Diamond Jubilee, celebrated in June of that year, before the departure of the Alert for Cumberland Sound.

In 1902, the mission had two missionaries, Julian Bilby and Edgar Greenshield. Bilby wrote in his journal about their celebration of Christmas: “On Christmas morning, after morning service, we called the people to the house and gave each one a plug of tobacco, a pint of oatmeal, and a small loaf. We then felt justified in enjoying ourselves in a quiet manner.”

Their Christmas season stretched on into the new year: “During the first week of January we decided to give the children their feast and Christmas tree. Mr. Greenshield and I were cooking for a week, and it is heavy work for two amateurs to cook for 80 children with good appetites, and also at the same time to choose the toys and presents and award the prizes. It means many late nights, but we managed to finish it all within the week, and then we gave the feast. Everything went off satisfactorily, and all seemed satisfied, the food prepared being sufficient to go round ten times, tea, of course, being ad lib [unlimited]. We finished up at 10.30, and then retired, feeling glad that all was over.”

The Blacklead mission closed in 1906. It would be over two decades before the Anglican church opened a replacement mission for the Inuit of Cumberland Sound, in Pangnirtung. In the meantime, a small congregation led by local Inuit catechists remained at Blacklead, keeping Christianity and the Christmas tradition alive there.