Christmas memories from across the eastern Arctic

“It’s important not to bring out negativity, but to show appreciation” 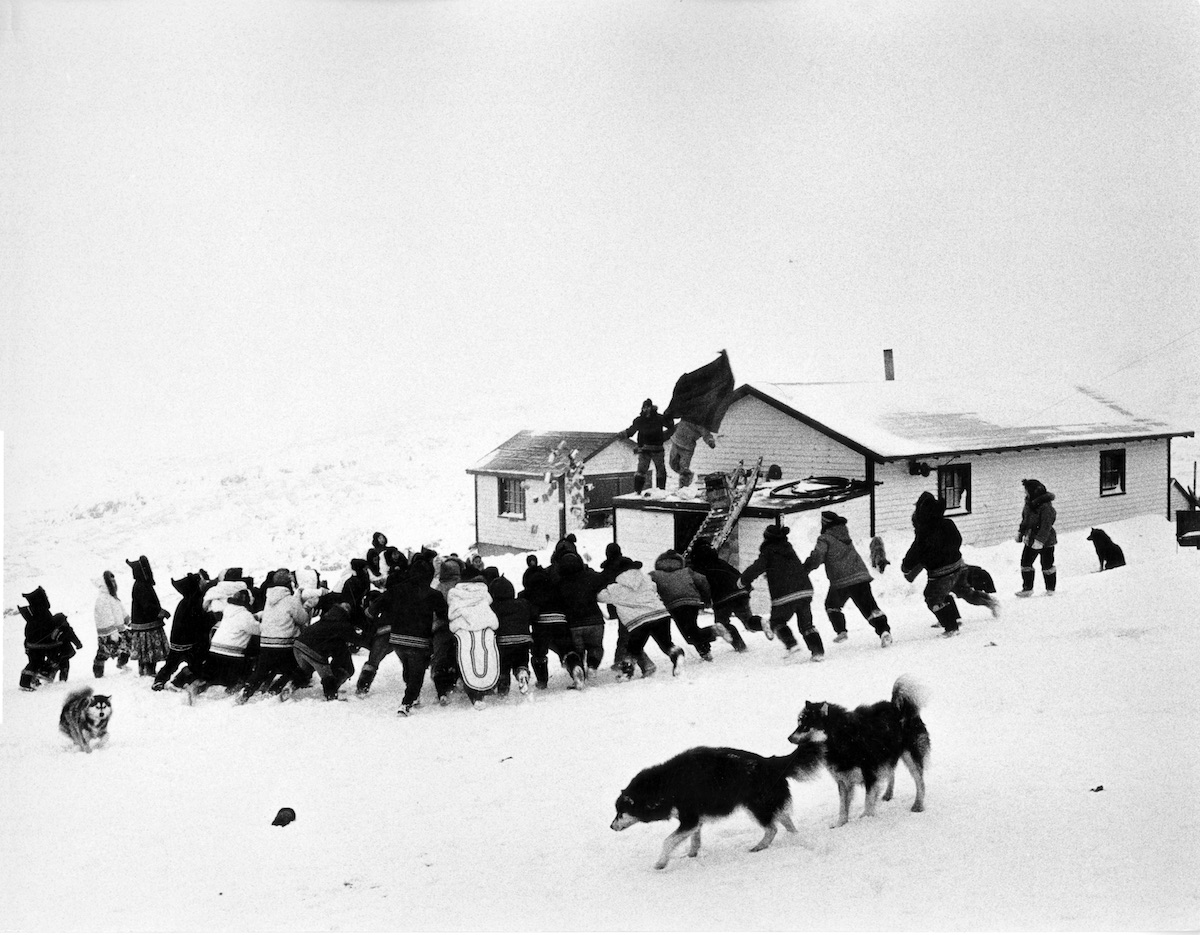 People throw candies into a crowd at Christmas in 1963, as seen in this photo taken in Nuvuk near Quaqtaq by Father Jules Dion. (PHOTO COURTESY OF AVATAQ CULTURAL INSTITUTE, IND-DIO-930.)

But that wasn’t the case 60 or more years ago. Back then, Christmas was about church, games, new clothes—and pork and beans.

That’s what we learned from an interview with Nunavut’s former deputy premier Levinia Brown of Rankin Inlet, as well as from reviewing archived interviews with the late George Koneak of Kuujjuaq and with longtime Nunavik priest Jules Dion, who died earlier this year.

Levinia Brown, now 71, grew up in Chesterfield Inlet. Prior to becoming an MLA in Nunavut, Brown was the first female mayor of Rankin Inlet, and she also helped set up the Eastern Arctic Teachers Education Program.

Even more than 60 years later, Brown has no trouble at all recalling the Christmas of her childhood in Chesterfield Inlet, memories which bring back the fragrance of new clothing, both traditionally made and from the south. Levinia Brown, now of Rankin Inlet, can recall the Christmas celebrations of her childhood in Chesterfield Inlet as if they took place yesterday. (PHOTO BY JANE GEORGE)

As for the southern trappings of Christmas, “I don’t remember seeing a Christmas tree,” she said.

When Brown was growing up, Chesterfield Inlet boasted the largest building in the eastern Arctic, the St. Theresa’s mission and hospital, run by the Oblate Catholic missionaries and Grey Nuns. Nearby stood Turquetil Hall, since torn down, which served as a residence for Inuit children, mainly taken from Igloolik, Pelly Bay and Repulse Bay, who attended the Sir Joseph Bernier federal school.

Brown also attended that school as a day student. That was unlucky, she said, because she never had a break from the hard discipline of school life there, where she was not permitted, among other things, to speak Inuktitut.

But at Christmas, school thoughts were far away as Brown and her family attended midnight mass at the mission church.

“I remember my parents putting us to bed early in the evening so we could sleep before the mass,” she said.

Brown and her siblings would be wearing their new parkas and kamiks, which her mother had made for them.

In church, they would be joined by the many people still living around the area in the camps, who came into Chesterfield Inlet by dog team for Christmas.

“They built igloos by the shore by the community,” Brown recalled. “It was nothing for them to do that in those days.”

The next day, Dec. 25, brought a delicious feast. Everyone went to the mission’s huge basement where there would be people sitting all the way up and down the room.

“I remember every year that meal was pork and beans, which the nuns baked all night, and it was served with a great big bun, one piece,” Brown said. “We thought it was so special.”

Then came the games and races outdoors, with coveted prizes including big 10-pound bags of flour and sugar, packaged in white-and-red or burlap bags.

After those bags were empty, “we would never throw them out and we would use them for tea towels and other things.”

In the evenings, over the Christmas season, the nuns would give away clothes donated from the south, including dresses for the girls, which Brown and the other girls would wear to school.

“They had a peculiar smell but we loved it,” Brown said.

Brown’s Christmas memories were full of laughter, but that’s not always the case today.

“Some people are more stressed out, and poverty prevails, so it’s important not to bring out negativity, but to show appreciation and recognize the local RCMP for their tireless efforts and their ongoing fundraising and support for the Christmas food hampers, and the same to the Catholic church, and the food banks,” she said.

Christmas should be a time for people to think of others who give, she said. “All of these helpful organizations make a huge difference in people’s lives as some are struggling,” Brown said.

Father Jules Dion: “The games and dancing went on until three or four in the morning”

Across Hudson Bay, Christmas in those years also brought similar joys, according to Oblate missionary Jules Dion, who died earlier this year at the age of 89. Father Jules Dion stands next to the altar in the mission in Kangiqsualujjuaq in June 2013. He left the community where he had lived for years shortly thereafter to retire in southern Quebec, where he died in 2018. (PHOTO BY JANE GEORGE)

In 1999, Father Dion, better remembered in Nunavik by his Inuktitut name, Ataata Pirtiu, shared his memories of Christmas in Nunavik during the late 1940s and 1950s.

Then, families arrived by dog team and built individual igloos by the mission in what is today’s community of Quaqtaq, in time for celebrations that began on Dec. 24.

“Everyone would be wearing their beautiful new clothes, made for Christmas,” Pirtiu said. “And we would then begin the games, competitions and dog-team races. One relay involved bringing blocks of ice that we’d cut to use for water during the winter down from the lake to the mission. As well as being a race, it was a service.”

“The games and dancing went on until three or four in the morning,” he recalled. “Then, everyone went out for a rest. On Christmas Day, as soon as there was enough light, all kinds of games for every age, for men, women, young and old, started up again.”

Around the time of December’s first full moon, an army plane would make a parachute drop of mail and gifts.

“But sometimes the parachute wouldn’t open and the basket would split open on the rocks and the presents would get all battered. Once we received a fruitcake, but its tin was crushed, and all the beads that the women were to use for decorating their clothes ended up in the fruitcake.

“So, we finally cut up what was left of the cake into small pieces, and when all the older men and women came over to the mission to play cards, we munched on the pieces of the cake and, in this way, we managed to recover the beads,” Pirtiu said. “And the cake, it was excellent!”

George Aqqiqiq Koneak: “When I wrapped my first present, I was really proud of myself!”

In 1998, George Aqqiqiq Koneak, who died several years ago in his early 80s, told Nunatsiaq News how he missed his first Christmas by a few days. That’s because he wasn’t born yet.

On Jan. 3, 1931, Koneak’s parents were travelling back to their inland camp by dog team after holiday celebrations at Quaqtaq’s Hudson Bay Co. post when his mother suddenly felt the onset of labour. They stopped and hurriedly put up an igloo.

“I was born maybe a half-hour after the igloo was built,” Koneak said.

When he was a child, his family always travelled at Christmastime back to the post from their camp near Diana Bay. More than 200 Inuit from nearby camps would gather there, building temporary igloos to stay in during their holiday celebrations. These began on Christmas Eve when the Hudson Bay factors treated everyone to a feast, then dancing to accordion music.

“The feast, it was pork and beans,” Koneak said. “They would make a big batch of pork and beans, lots of bannock, with lots of raisins in the bannock. When the dance would come around in the evening, everyone would fart!”

At midnight the festivities paused for a church service. Gift giving, remembers Koneak, was also part of the holiday, but not as formal as today. “People were giving something, but nothing new,” he said. “Older people would make sealskin lines [for use in dog teams] and packs. Some people would trade jackets and parkas. [There was] nothing new, coming from the store, and wrapped up in fancy paper. There was nothing to wrap it up with.”

In 1957, Koneak was one of four Inuit men to make a historic first appearance at an Eskimo Affairs committee meeting in Ottawa.

Then, after moving with his family to old Fort Chimo in 1958, Koneak continued to advocate for Inuit: he was one of the signatories of the 1975 James Bay and Northern Quebec Agreement, a founding member of the Northern Quebec Inuit Association and later a governor of the Makivik Corp.

When Koneak moved with his family to Fort Chimo, now known as Kuujjuaq, he was introduced to another way of celebrating Christmas, with lights, decorations, trees and wrapped gifts.

“When I wrapped my first present, I was really proud of myself!” he said. “You had to sleep first, then get up at one o’clock and do the wrapping on Christmas Eve.”

Koneak usually received socks and mittens and other articles of warm clothing for gifts.

“My wife, she was able to make parkas, eider-down parkas,” he said. “We collected it in the summertime, and she kept it in bags and cleaned it, taking out the dirt and grass and feathers.”

Then, games were an important part of Christmas, with indoor and outdoor games as well as dog-team races. Koneak said in 1998 that he found the prolonged Christmas celebrations and exchange of gifts a bit overwhelming.

“Christmas presents today are fantastic. There are expensive ones, could be a Ski-Doo, could be an outboard motor,” he said. “We’re spoiling our kids now, and that’s not our tradition.”

Koneak also said he regretted that alcohol had become a part of community celebrations.

In 1998, the best part of Christmas for Koneak was being with his family of 11 grown children, 43 grandchildren and numerous great-grandchildren. But a night or two of Christmas was enough for him, he said, then he headed out of Kuujjuaq to go hunting.

“There’s a lot of differences,” Koneak told Nunatsiaq News 20 years ago. “I’ve touched the beginning and [how it is] right now. I’ve felt the difference between those sealskin lines and a Ski-Doo at Christmas.”