Christmas trees can grow in Iqaluit

Transplanted black spruce grow about a centimetre per year 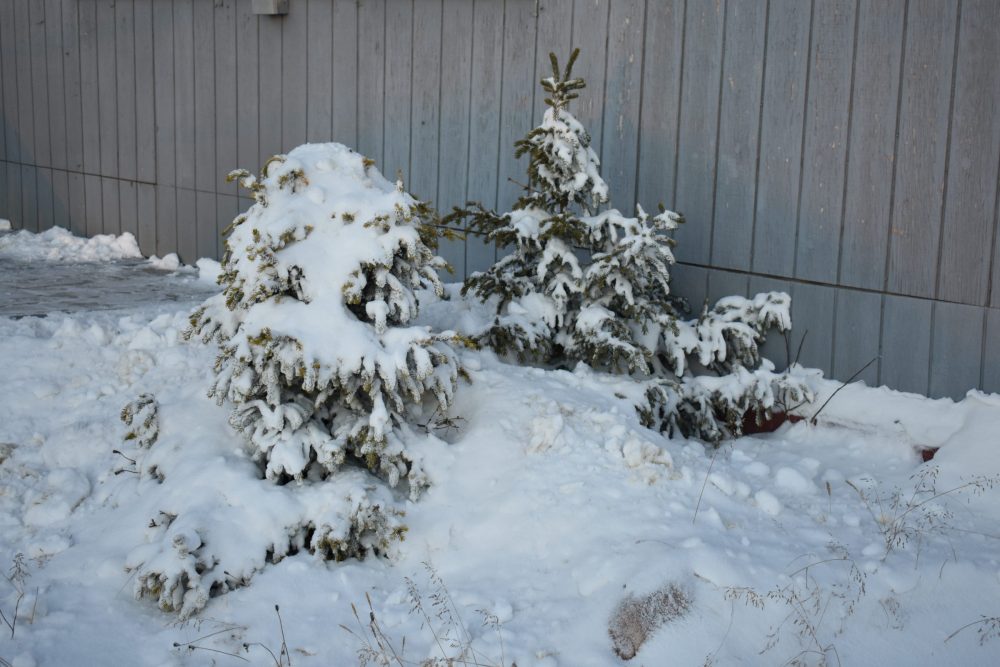 The common belief in Iqaluit is that no trees will grow here, but Bert and Joanne Rose have been proving that wrong for 30 years. (PHOTO BY COURTNEY EDGAR)

Far above the tree line, two black spruces peek out from a pile of snow on Iqaluit’s one-way road. One is a bit taller than the other, one is a bit wider. Both have grown against all the odds through long Iqaluit winters and the few summer days warm enough for growth.

The two conifers have not just survived 30 Arctic winters, but have grown a metre since their Iqaluit transplant in 1988.

That was the year a research botanist working with the Canadian Museum of Nature, Susan Aiken, had brought Bert and Joanne Rose a gift of four saplings to plant in their front-yard garden in Iqaluit.

Aiken is the first author of The Flora of the Canadian Arctic Archipelago and co-author of Common Plants of Nunavut.

Since the seedlings had sprouted in Inuvik, in the Northwest Territories, Aiken thought they should be able to grow in Iqaluit if they had the right soil and fungi wrapped in a root bundle.

“Iqaluit is at least 4 degrees of latitude further south than Inuvik but Iqaluit has no spruce trees,” Aiken said in an email. She had wanted to know why. Was it because they had not been re-introduced to Baffin Island after the last Ice Age or was it because the soil doesn’t have the essential root fungi? Or was the climate really too severe?

In the end, she found all three were contributing factors.

The trees are kept in an elevated bed in the front yard, beside the house, with optimal sun, and supplemented with earth the couple found on construction sites.

The four trees grew quite happily for about 10 years, Bert said, until one died and one was stolen.

“They were about 12 or 14 inches high and we came home one day and it was gone. We could see where someone had come with a serving spoon and dug it out to get a root ball and stolen it in the night,” Bert said.

However, these days, the Roses have no fear of tree theft. The trees are too tall now, with roots so large it would take much more than a spoon to dig them up.

The trees grow about a centimetre per year, according to Bert, when the weather is above 10 degrees, so their growing season is about a month each year.

When brought to Iqaluit 30 years ago, the saplings could fit in an adult’s hand. Now they are about four feet tall.

The tree trunks are almost two inches in diameter and the trees are slightly stunted because only the part that remains below the snow can survive the winter.

“With the position of this house, there is a natural snow drift that blows over the top of the house and dumps in front and it buries them very nicely,” Bert said.

No tinsel for these trees

The Roses don’t decorate the trees with ornaments over the holidays, because, starting in December, the snow drift against their home will have mostly covered the trees.

In 2017, though, nature provided its own decoration: a bird’s nest.

“I wonder what those birds thought [about] being able to live in a tree here,” Joanne said.

Bert points out that these are technically not the only trees in Iqaluit―there are Arctic willows crouching on the land around their house, but the tangled branches lie low on the tundra.

The Roses believe they may have the only non-native trees in Iqaluit.

And certainly the tallest.

Over the years, Aiken has been checking in with the Roses, in person every few years and through Bert’s progress reports.

But it was only in 2001, at a conference session about a study of tree lines, when she found the answers to the questions that caused her to take the four saplings to Iqaluit.

“But should climate change result in warmer summers for Iqaluit, it would be possible to introduce and grow black spruce as Christmas trees.”