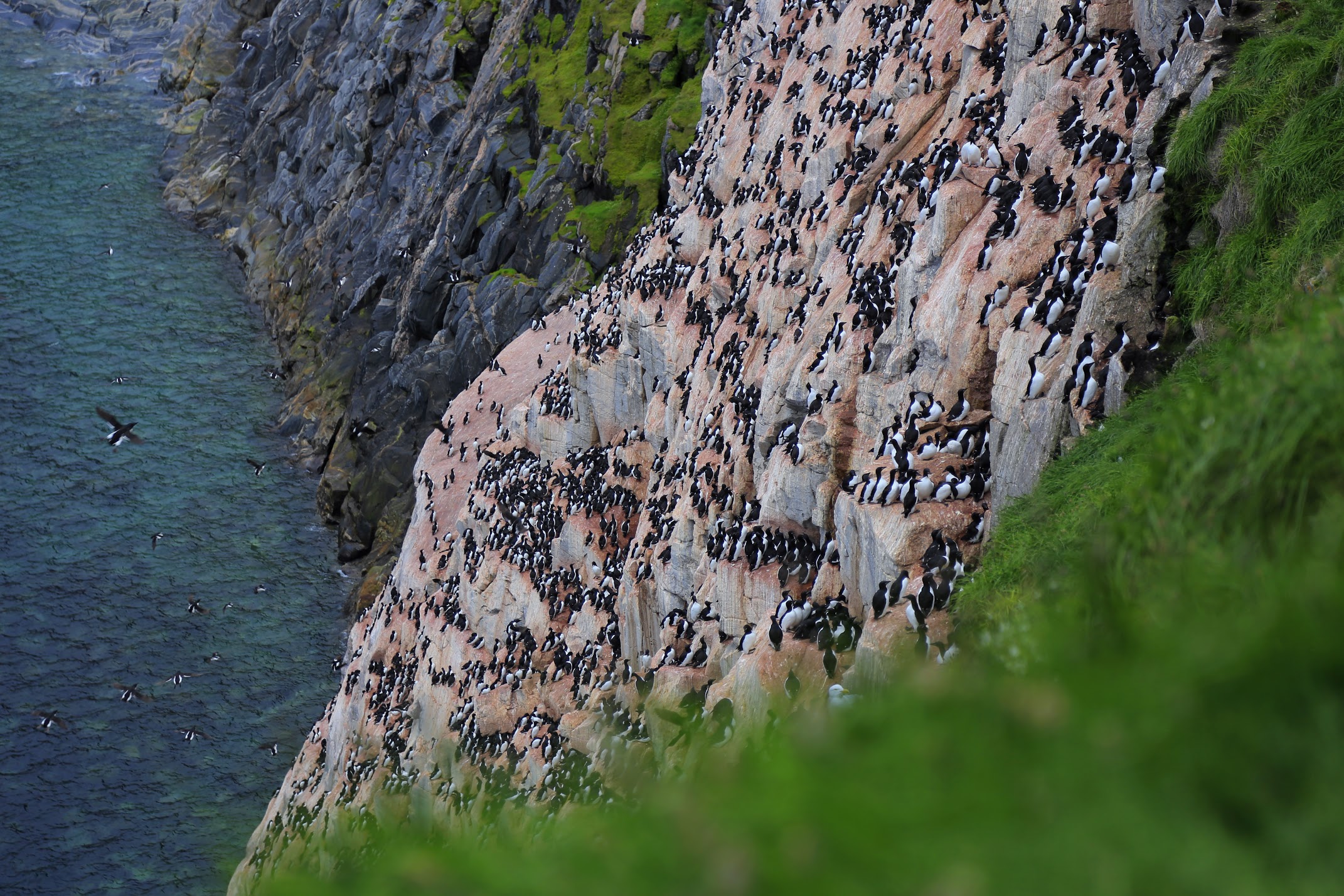 Thick-billed murres cling to the cliffs of Coats Island, where 30,000 pairs breed every year. Researchers have studied these black-and-white seabirds on the island since 1981. (Photo by Douglas Noblet)

Climate change in the eastern Arctic has already altered the travel, diet and safety of some of the most numerous birds in the circumpolar world: thick-billed murres, known as akpait in Inuktitut.

These and other changes are likely to continue, says Allison Patterson, a McGill University graduate student who has tracked the habits of these black-and-white birds on Hudson Bay’s Coats Island, known as Akpatordjuark in Inuktitut.

Murres are a key Arctic species to monitor, Patterson said. The birds are homebodies who like to return to the same nesting sites year after year, so “they can tell us a lot about the impact of changes in the marine environment.”

Reduced ice in the eastern Arctic and northern Hudson Bay has already had a noticeable impact on Coats Island’s murres.

According to seabird monitoring that started in 1981, the 30,000 pairs of murres that breed on Coats Island now arrive six days earlier at the cliffs, and they leave Hudson Bay three weeks later than they used to.

Based on climate change forecasts, Hudson Bay is expected to become a more suitable place for murres to spend the winter during the next 80 years, Patterson said.

Some murres could end up skipping migration entirely, she suggested, dramatically altering their live cycle and species distribution.

Patterson said these changes in the ice could also affect the birds’ ability to breed in time for peak food availability.

Already murres have faced a large decrease in the number of Arctic cod. That means their preferred food for chicks has now been replaced by capelin that have moved into the Arctic waters. Cod gave the chicks more nutrition than the capelin they eat now, and, as a result, they’re now showing slower growth, Patterson said.

This summer Patterson won’t be going to Coats Island. The Polar Continental Shelf Program, which provides logistics to Arctic researchers in the field, halted operations due to the COVID-19 pandemic.

But her research into murres will continue.

That’s because in previous seasons, Patterson managed to attach tiny, battery-powered geolocation devices to the legs of about 30 to 60 murres—and many of these will still be giving out signals this year.

The devices are able to measure the murres’ diving behaviour and location, with information about light, temperature and water salinity. The devices use light to calculate the birds most likely location. “It’s not as accurate as a GPS, but still gives a good estimate of where they are,” Patterson said.

“There have been some surprises in the data that’s come back, which show the birds spend the winter spending up to six hours a day … diving down to an incredible 100 metres or more,” Patterson said.

“Their diving through [the] whole year was one of the things that was really surprising for us—how these birds are working in the middle of winter in the Labrador Sea, from the Grand Banks to Davis Strait.”

The murres propel themselves with their narrow wings, which are good for diving but not very good for flying, she said.

“When you think of penguins, which are flightless, murres are about as close to being flightless as you can get, but they’re really efficient at diving,” she said.

As soon as the ice starts receding in the spring, murres go to their breeding grounds on the steep cliffs of Coats Island. 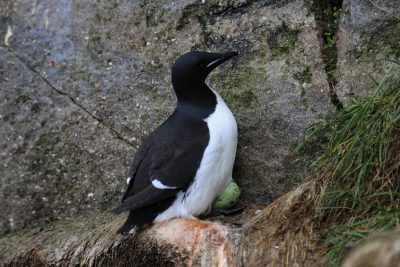 Perched on a ledge, a murre sits on its egg to keep it safe. (Photo by Douglas Noblet)

They incubate a single egg for 25 days, but a lot of that involves just keeping the egg in place and stopping it from rolling off the nesting ledge, Patterson said.

The breeding pairs stay together year after year, and most murres, which can live up to 28 years, breed within a metre of where they were born.

While on Coats Island, the murres try to avoid predators, Paterson said. These include glaucous gulls, ravens and, most recently, polar bears, which now spend more time on land, have become good climbers, and have developed a taste for murre eggs.

Generally murres look for a long skinny ledge “where you have neighbours, but not enough room for a gull to get you.”

“The higher the better, as they are all actually pooping on each other so I like to think they like a site where they’re not going to get pooped on,” Patterson said.

But now, a good nesting site for murres is also one that polar bears can’t reach, she said.

Overall, researchers have been able to learn a lot about what murres are doing when they are breeding and tied to land, but “we know very little about what they’re doing the rest of the year when they are at sea,” she said.

Murres, also known as Brünnich’s Guillemot in Europe, remain numerous in the circumpolar world. Not far from Coats Island, there’s an even larger colony of about 400,000 pairs on Digges Islands, known as  Saaqqayaaq-Qikirtasiit in Inuktitut, off Ivujivik.