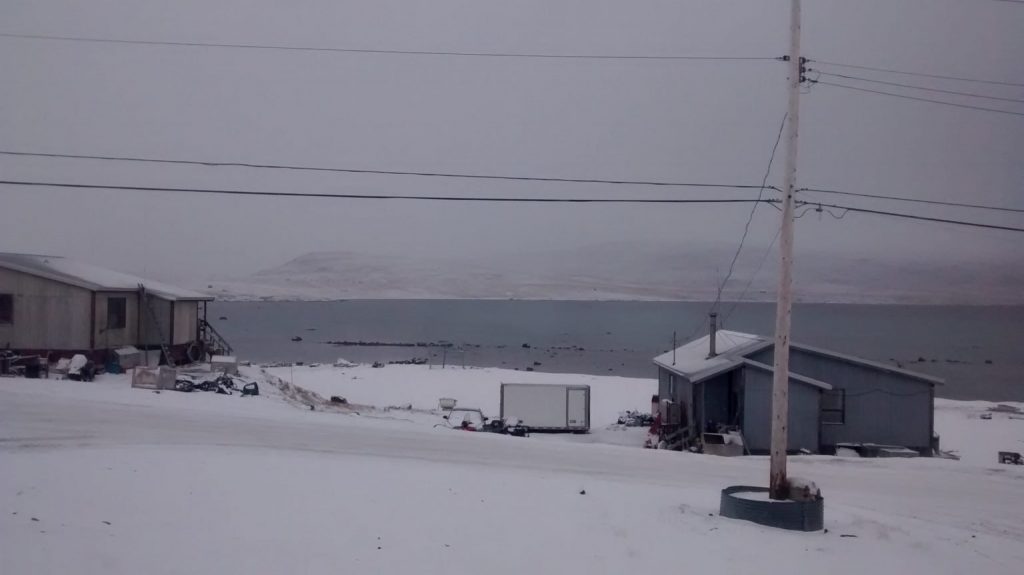 Clyde River, seen in this 2016 file photo, has faced a series of blizzards at a time when the hamlet is low on diesel fuel and its snow-removal equipment is broken down. (File photo)

After Clyde River declared a state of emergency because of snow-clogged roads and houses last Thursday, another blizzard hit the hamlet over the weekend, and the municipality’s last snow-clearing vehicle broke down, Mayor Alan Cormack said.

Over the past month, the combination of a series of blizzards and its snow-clearing vehicles breaking down has led to the hamlet not being able to remove snow from roads or houses fast enough.

Water delivery has taken up to five days instead of two, and sewage tanks have frozen over because they have not been cleaned in two weeks, Clyde River’s chief administrative officer Jerry Natanine told Nunatsiaq News.

The snow-clearing vehicles — two loaders and a bulldozer — are breaking down because they have been running on Jet A fuel, which has a higher sulphur content and harm the machines, Natanine said. The hamlet learned that the fuel was damaging the equipment when a technician examined the vehicles a couple weeks ago, he said.

The vehicles need diesel fuel but the community did not have any, Natanine said.

Fortunately, the hamlet was able to get 11 barrels of diesel fuel from a nearby Nunavut Parks site on Sunday.

Natanine said the hamlet had contacted the Government of Nunavut, before the state of emergency was declared, requesting diesel fuel for snow-clearing vehicles be flown in.

“If it happened to Ottawa, the whole army would be there by now,” Cormack said of Clyde River’s situation.

The Government of Nunavut’s Department of Community and Government Services received the hamlet’s declaration of a state of emergency on Feb. 11 and is reviewing what resources the government can provide to the hamlet, spokesperson Ronnel Guilaran said in a statement to Nunatsiaq News.

Cormack said the community is trying to be resilient, as everyone is helping each other by shovelling as much they can.

“We’re getting faster as days go by,” Cormack said.

Cormack said the hamlet thought its vehicles had been running on diesel fuel, but only found out they have been running on Jet A fuel when the technician tested the fuel of the snow-clearing vehicles.

Natanine also said he does not know why Clyde River has Jet A fuel, and it is the petroleum product division with the GN that makes that decision.

The hamlet’s two loaders and bulldozer will not be able to use the recently obtained diesel fuel immediately, as the Jet A fuel did too much damage to their cooling systems and mufflers, Cormack said.

Natanine said the hamlet has had the snow-clearing vehicles for a couple of years and continually had problems with them. Colder weather exacerbates those problems, which is probably why the vehicles broke down over the winter, he added.

Since the hamlet’s older snow-clearing vehicles were less environmentally friendly, they may have been able to better handle a heavy fuel like Jet A, Cormack said as to why the newer vehicles broke down but the previous ones did not.

A technician should be arriving in Clyde River Tuesday to help fix the vehicles, Natanine said.

Correction
This story has been updated to reflect the fact that Clyde River received barrels of fuel from a Nunavut Parks site, rather than from Parks Canada.