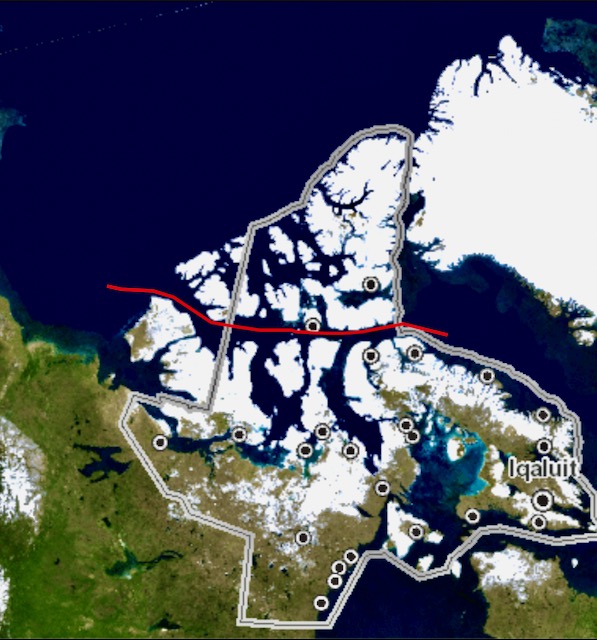 An international company planning to lay fibre optic cable through the High Arctic has been given two more weeks to respond to government concerns over the project. (Photo courtesy of Nunavut Impact Review Board)

Far North Digital plans to survey through High Arctic, Nunavut where 900 kilometres of cable would run

An international firm planning to lay fibre optic cable through the High Arctic has been given two more weeks to respond to the federal government’s concerns over its plan.

On Tuesday, the Nunavut Impact Review Board told Far North Digital LLC to submit its responses to the government’s concerns by Dec. 6.

Far North Digital and its Canadian affiliate, True North Global Networks LP, have partnered with Finnish network provider Cinia on the project and have applied to conduct a route survey as part of its plan to lay 14,000 kilometres of fibre optic cable stretching from Japan eastward to Finland or Norway.

Of that, 900 kilometres of cable will run through north Nunavut, close to the communities of Resolute Bay, Arctic Bay and Pond Inlet.

The work is needed because existing, older transnational fibre optic cables are reaching the end of their lifecycle and newer cables would improve the transmission of data across the world, Far North Digital stated on its website. The company has said it hopes to use the cables to improve services near the communities it runs close to.

The availability of seasonal ice-free passage is part of its reasoning behind laying the cable through the North.

The work being proposed — and for which the company must respond to federal government comments about — involves a marine survey.

A separate application will have to be submitted to the review board later before the cables can be put down.

However, this survey comes with concerns from several departments in the federal government.

The need for community consultation is stressed in comments from Crown–Indigenous Relations and Northern Affairs Canada, as well as Transport Canada.

Developing an impact tracker to detect possible adverse effects to the environment was also suggested by Crown–Indigenous Relations and Northern Affairs Canada.

Concerns listed by Parks Canada include the potential for disturbances to marine wildlife, as well as a request that the survey avoid the marine area of migratory bird sanctuaries of Prince Leopold Island and Bylot Island.

Transport Canada noted consultations are especially important so the survey does not interfere with shipping routes in the affected communities.

The survey will require testing the feasibility of the Arctic seabed and soil for use in the project, as will also need input from communities.

Ik Icard, a spokesperson for Far North Digital, told Nunatsiaq News in October that the company wants to consult with Northern communities the cables pass near to learn if they are interested in getting connected. It also wants to know of any concerns communities have regarding endangered species or possible threats to natural resources.

Icard said working seasonally and with ice will bring challenges, but with approximately 1.4 million kilometres of seafloor cable being installed across the world the task is not daunting.

He acknowledged that warming temperatures in the Arctic due to climate change have helped make this cable-laying project possible, calling it an “unintended benefit” from an otherwise bad scenario.

Far North Digital is aiming to have its cable in service by the end of 2025 and last December estimated the cost at close to $1.5 billion.