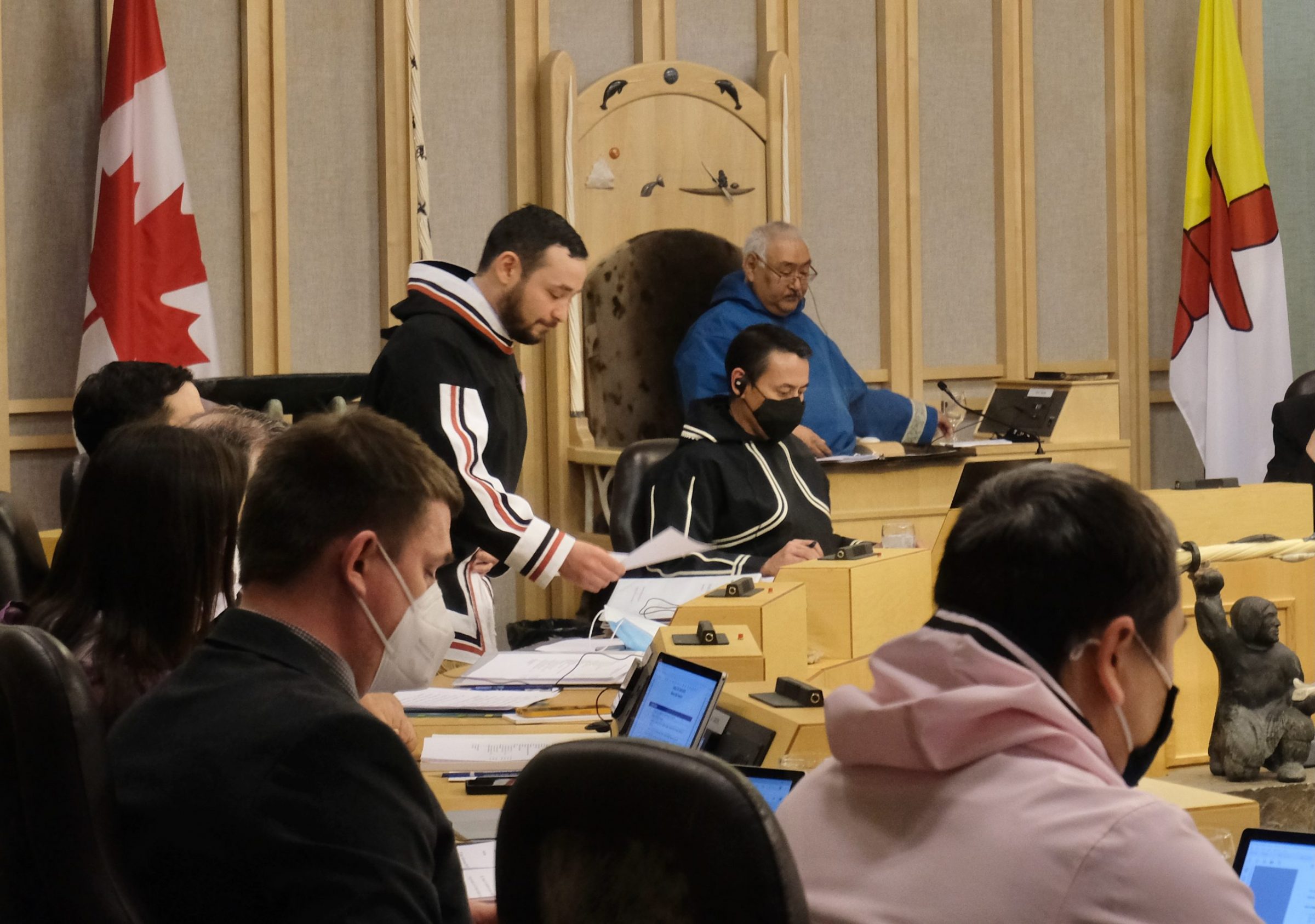 Adam Lightstone, seen speaking in Nunavut’s legislative assembly, stepped aside from his ministerial portfolios Monday after an integrity commissioner report concluded there was a conflict of interest when his spouse was appointed the acting deputy minister in a department Lightstone oversaw last December. (File photo by Mélanie Ritchot)

Nunavut cabinet minister Adam Lightstone has lost his cabinet portfolios following a conflict of interest in which his spouse was appointed to a senior acting position — for less than a week — in one of the Government of Nunavut departments he led.

Nunavut’s integrity commissioner, Katherine Peterson’s investigation into the issue was made public on Monday. A GN news release said Lightstone was “stepping aside” from his cabinet roles, including as Minister of Human Resources and Minister of Finance, following the release of Peterson’s report.

Lightstone, the MLA for Iqaluit-Manirajak became minister of finance and minister of human resources after last fall’s territorial election.

Lightstone’s conflict of interest involved the appointment of his spouse, Hilary Burns, who was the director of employee relations and job evaluation at the Department of Human Resources to acting deputy minister, the department’s second-highest position. A deputy minister is the top staff position in a government department, outranked only by the minister, who is the elected politician appointed to oversee its operations.

Burns was acting in the deputy minister’s position for about five days last December, the report states.

Because Lightstone was not the one to suggest she get the position, and because he showed concerns about the situation, Peterson recommended Lightstone be reprimanded by the legislative assembly and that he publicly acknowledge his conduct.

Peterson’s report notes Lightstone’s spouse was only in the position for a short period.

She also noted the Human Resources Department has been chronically understaffed, and while other employees had been asked to take the deputy minister position, they had declined. But nobody checked if a senior staff member from another department could take on the role, Peterson said.

Peterson also considered that Lightstone’s approval of Burns’ appointment was based on advice given by his most senior staff member, permanent deputy minister Sheila Kolola, and Lightstone himself had only recently come into his role as minister.

The integrity commissioner’s report shows Kolola decided that Burns was the best person to fill in for her as deputy minister based on her skills and experience.

“In consultation with her Assistant Deputy Minister, Ms. Kolola was advised that the acknowledged conflict of interest could be addressed by having an alternate reporting pathway — namely that her acting Deputy Minister would not have direct contact or communication with the Minister regarding matters which arose,” the report states.

On the other hand, Peterson said there were multiple times Lightstone should have sought more advice and that staffing shortages, the appointment’s brief duration and his Burns’ pending resignation from the department didn’t counter the “apparent” conflict of interest.

In the end, even though there was no evidence of any benefit or advancement of the private interests of either Lightstone or Burns, Peterson said the situation still presents a conflict of interest in the eyes of the public.

Nunavut Premier P.J. Akeeagok’s office said Lightstone has stepped away from all his portfolios effective immediately, in a Monday news release.

Akeeagok first announced on March 8 in the legislature that he would refer the issue to the integrity commissioner, the day after allegations of a conflict of interest were brought up by George Hickes, the MLA for Iqaluit–Tasiluk and Arviat South MLA Joe Saviataaq

Peterson’s report said Akeeagok never had a formal discussion with his newly elected ministers about appointing people to positions like these and he didn’t explicitly ask them to disclose possible conflicts of interest before making assignments.

Lightstone told Peterson he had casual discussions with Akeeagok before he was appointed the Minister of Human Resources and told him that his spouse worked there.

Peterson said Akeeagok does not remember whether Lightstone told him his spouse worked in a senior Human Resources position.

“There are some discrepancies in the recollections of [Lightstone] and the Premier on this issue,” Peterson states.

Lightstone was the minister responsible for Human Resources, Finance, the Workers Safety and Compensation Commission and the Liquor Licensing Board.

The legislative assembly must now reconvene to consider and respond to the integrity commissioner’s report within 10 days.