Kenneth Bell and Noah Papatsie are both vying for the top spot on Oct. 28 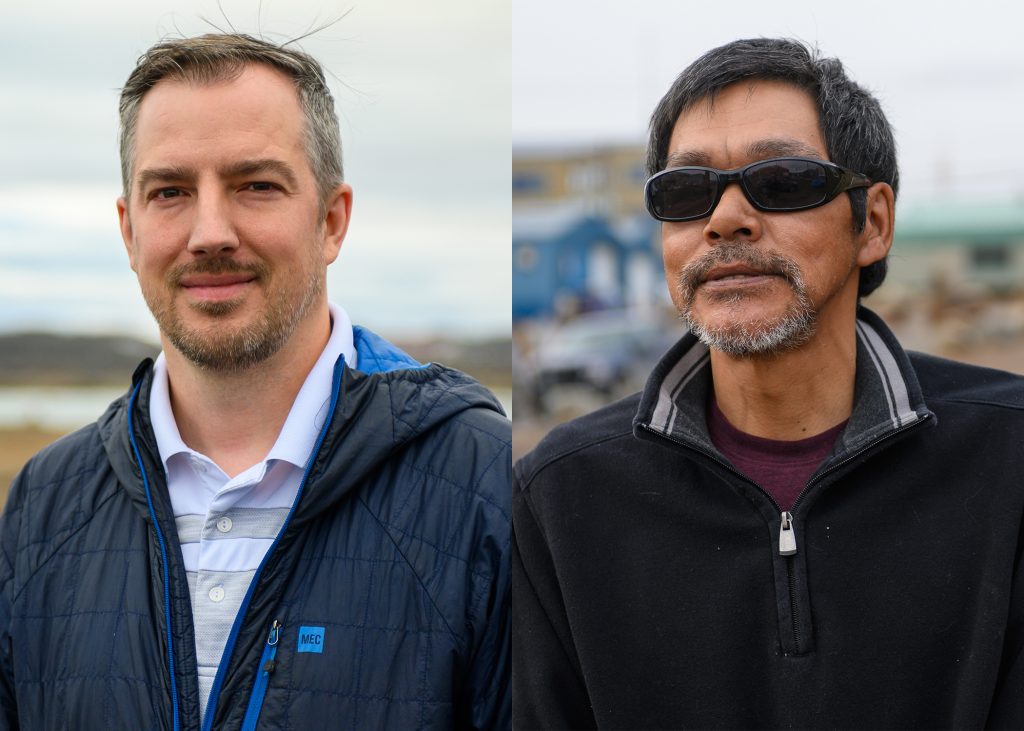 Kenneth Bell (left) and Noah Papatsie (right) are both running for mayor of Iqaluit. (Photos by Dustin Patar)

On Monday, Oct. 28, residents of Iqaluit will take to the polls to choose a new mayor, during territory-wide municipal elections.

At the end of August, Madeleine Redfern, the current mayor of Iqaluit, announced she would not be seeking re-election, saying, “It’s really important that we see good members and capable members of our community to step up to be mayor and council.”

While Iqalungmiut will have to choose eight candidates out of the 27 running for council, the mayoral race is simpler: one position, two candidates.

Nunatsiaq News recently sat down with the two mayoral hopefuls to hear about who they are and what they would bring to the city as mayor.

Below are select moments from those conversations that have been edited for length, grammar and clarity.

Nunatsiaq News: Tell us a little about yourself.

Kenneth Bell: I grew up here, I’ve been here since 1986. I was born in Inuvik in the N.W.T. So I lived my entire life in the North, other than a few trips south for schooling, but other than that, it’s been basically all here. I have three kids, all born and raised here, and I am the chief liquor inspector for the Department of Finance.

NN: Why are you running for mayor?

KB: Iqaluit’s in bad shape. I was on council, not this past council, but the council before, and I was very vocal—there were a lot of little wars that were played out and the council, in my opinion, was very weak at the time.

This council that just passed, it did a much better job at performing. Although just the way they went about some of the things, I don’t agree with and, you know, it just made me want to get back in there and figure it all out.

NN: What valuable skills would you bring to the position of mayor?

KB: Well, I’m not scared to make hard decisions. I have very thick skin. I’ve worked for Nunavut liquor for 15 years now, enforcing liquor laws in the territory. So, over the years, I’ve gained some experience in dealing with difficult people. I am one of those difficult people—I can be, I don’t try to be.

I want everyone around me to shine, I don’t like taking the forefront of anything, I would much rather everyone else, you know, stand up and shine and give them the skills to do so. And that’s what I plan on doing this term.

I see our past mayor, she did a good job in lobbying the government for federal funding, and a bunch of other things that she did really well. But at the same time, they did it more like a machine and didn’t do it with a human touch.

As you can see, the municipal services are lacking because of it. You know, morale at city hall is really low. There are many things that are just basic human rights and needs that we need to correct and I think I have that ability to do so.

NN: What are some of the most important issues facing the city?

KB: Water, of course. We can’t really do anything without fixing our water crisis right now.

I think the number one problem, other than those infrastructure things that are obviously at the very top of our list, is that we’re not a community. We operate like an outside body when we should be operating within.

And I plan on changing that with simple things like doing Christmas lights during Christmas time and celebrating. We’re going to bring in a “meet the council” every couple of months to really bring this council into the community and remind us that we are public servants. You know, first and foremost, public servants is what we are. We’re not running to be leading, we’re running specifically because we’re public servants and we need to give that back.

NN: How do you intend to ensure that Inuit voices are heard?

KB: Obviously, a lot of people here are unilingual. The city is looking for two new communication officers and one is mandatory Inuktitut-speaking position. So I think we have an opportunity there, to get back in.

But really, again, it’s just about being in the community and making sure that council has a ‘meet the council’ every couple months, and people can come out and be heard without having to come to council meetings and deal with all that nonsense. You know, a regular member of society shouldn’t have to come to council to be heard. Right? We should be out there with them and, you know, we are, but for whatever reason people just aren’t acting like public servants sometimes and we have to make sure that we fix that.

NN: Tell us a little about yourself.

NP: Born and raised here in Iqaluit. I’m a foster parent, I’m also a vision-impaired blind person and I have a guide dog. I’m a full-time advocate for the disability advisory committee, as well as part of community organizations such as legal aid services, the Education Department and the Canadian Association for Community Living.

NN: You’ve been on the council now for six years. Why decide to run for mayor now?

NP: This is my second time running for mayor. I want to give back. I have grown to be a hunter and I’ve grown to be educated, and those are two different things I grew up with and I think I can bring so much of that knowledge to everyone.

Most of the time, when someone comes from the south, they like to change things. But us up here, we don’t really want to see change. There are so many things that we used to have in place that worked for us, but now that they’re gone—it’s like something’s missing here. I think if we fixed that something missing together, we would have a better understanding of one another and be able to move forward in a better manner.

NN: Do you have an example of one of those things that are missing, that you’d like to work on?

NP: I believe today, right now, a lot of it is towards education and promoting Inuit. I believe I will be a great example that can educate everybody. If I speak my original language, people are going to understand me out there in the 25 communities.

NN: What valuable skills do you bring to the position of mayor?

NP: To be honest, you know, I mentioned earlier, I wasn’t blind all my life, but I became an advocate to understand more of our society and that’s where I took it. I’m on everybody’s side, I’m able to give an understanding of both sides. I can promote more to this community we all live in, so that we can make each day accessible for each other.

NN: And you’ve mentioned the word community now quite a few times. Is that something that the city could work on more?

NP: Yes, we can work on it more together and create a committee to engage better within our community. Just like what’s been happening these past few years in the city, they’re trying to engage with new issues such as mental health issues, opening up a new men’s shelter. I’ve been really happy to be a part of that because I’ve been really promoting it. And I’m promoting more education on new issues that we are all facing.

We have the beer and wine store, but not a real place for them to get better, meaning mental health issues like how do I quit? What can I do? Those kinds of issues are, you know, tough, but they are very important things to talk about. Is it a great time to bring in a beer and wine store? I don’t know. But we live in Nunavut here and we have to deal with 25 other communities, and I think at times, we need to listen to other communities and engage more with each other and within our own community. Tomorrow is a different story.

NN: What are your thoughts about what the city should do in terms of the water situation?

NP: We live in the North, we’ve got lots of water on the ice, we’ve got lots of water on the land, but we can save that water. If we create water towers, you know, I’ve been a big supporter of those things. If we could create water towers for places such as Apex or the new uptown area, where it can give between 200 to 400 homes some water, then the other water can go to the people down here. We can sustain it all together.