“We always have muskox, caribou and char on the menu all the time” 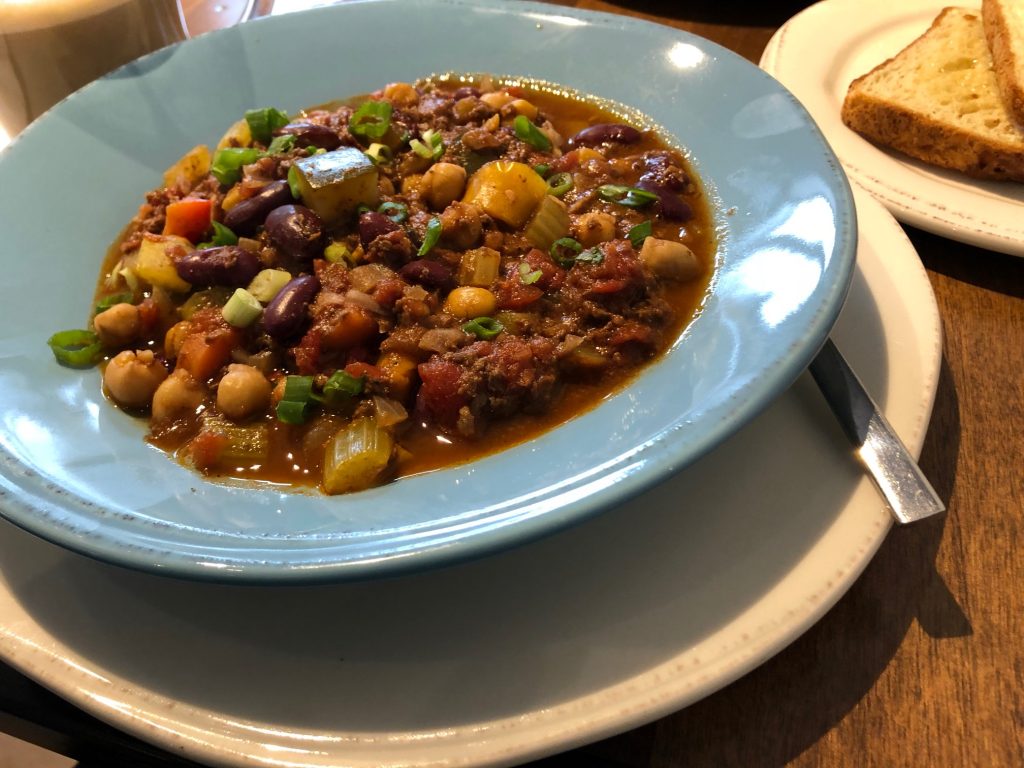 Simple, local and delicious: a bowl of muskox chili at the Kuugaq Café. “The country meat is the most exciting—the quality is just fantastic,” says chef Phil Goodland. “It’s really good for you and incredibly nutritious. You’re not going to find better protein anywhere because it’s wild game from the Arctic.” The recipe? It’s a secret, said café owner Stuart Rostant.(PHOTO BY JANE GEORGE)

If you’re in Cambridge Bay and like muskox, caribou and Arctic char, count yourself among the fortunate. This blackboard lists the daily specials at the Kuugaq Café. (PHOTO BY JANE GEORGE)

Every day on the blackboard menu at the Kuugaq Café you will find these local foods, along with home-baked cookies, cakes and, these days, seasonal holiday treats, like a frosted Christmas log cake.

But you had better plan to come in advance, at lunch or for a weekend brunch, because seating is limited. The café offers several wooden tables seating up to six, a few bistro tables for two and an area with some comfortable chairs for those inclined to have coffee or chat with friends. A latte and a Christmas log, one of the Kuugaq Café’s holiday treats. (PHOTO COURTESY OF THE KUUGAQ CAFE)

Owned by Stuart and Amanda Rostant, the cafe opened two years ago in an area of Cambridge Bay that’s getting more built up as the community of about 1,800 continues to grow.

In the kitchen you’ll find chef Phil Goodland. He’s originally from Newfoundland, where cooking with wild meat and fish is also a way of life, he told Nunatsiaq News.

“We always have muskox, caribou and char on the menu, all the time,” Goodland said.

“The country meat is the most exciting—the quality is just fantastic. It’s really good for you and incredibly nutritious. You’re not going to find better protein anywhere because it’s wild game from the Arctic.”

Generally, Goodland said he tries to apply a southern twist to northern cuisine.

“A classic example would be a beef and barley stew. Obviously, why not just substitute caribou and barley,” he said.

As well, Goodland has cooked up curries with country meats and some Asian flavours for café patrons.

“People really enjoy that, soy and all those flavours,” he said. “It’s fun to play around with that stuff.”

But his favourite dish remains a whole piece of caribou, such as a shoulder, braised. For the most part, customers are receptive to his bringing diverse cooking styles north, although they sometimes wonder about the lack of fried foods, he said.

The restaurant doesn’t even have a deep fryer, although sometimes the menu will include something like a fried chicken sandwich.

“For the most part people are open to what we are doing. The local population really responds to the country meat and baked goods,” Goodland said. Muskox burgers come with fresh toppings and a side of fruit at the Kuugaq Café. (PHOTO BY JANE GEORGE)

The muskox burgers, made with meat sourced from Kivalliq Foods in Rankin Inlet, are incredibly popular.

Each muskox produces about 135 kilograms of meat.

And, if you ‘re on a gluten-free diet or you’re a vegetarian, the Kuugaq Café also serves dishes that you can eat.

You can find the Kuugaq Café at 16 Koihok Maghagak, and it’s best to look on its Facebook page or call 867-983-2662 to check on the hours, which can vary, particularly if they’re hosting special events. Feeling adventurous? This muskox keema could do the trick. (PHOTO COURTESY OF THE KUUGAQ CAFE)

Cook and stir onion in the hot oil until soft and beginning to brown.

Add a bit of water if browned bits stick to bottom to loosen them. Add ground muskox and cook until it’s nicely broken apart and browned.

Add potatoes, then cover pot and simmer until potatoes are tender.

Let curry rest for five minutes, then sprinkle with additional garam masala (optional) and serve over rice or as a side dish.