Cumberland Sound bowhead whales may be able to adapt to habitat changes: study

“There’s the possibility that there’s some good news here” 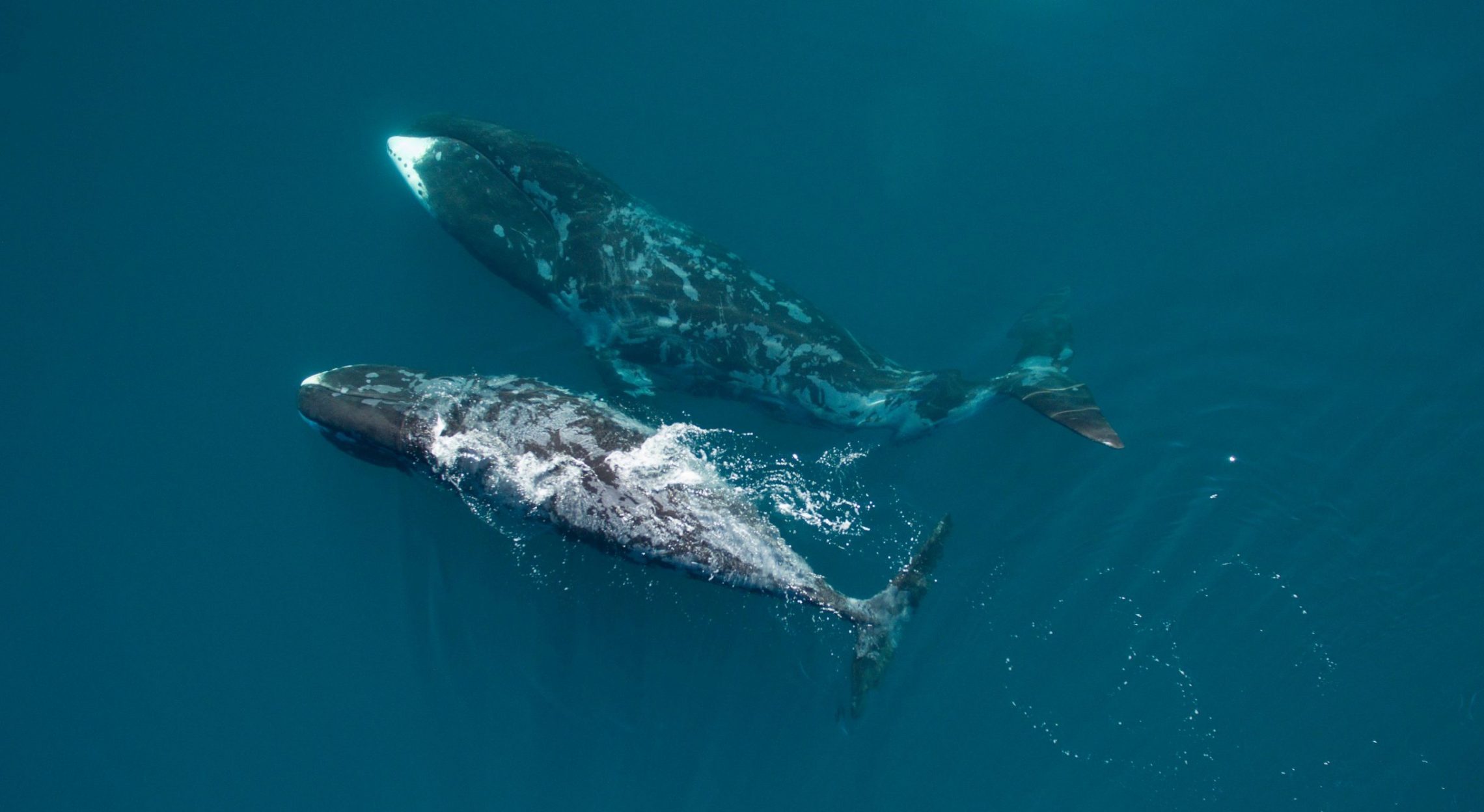 A study of 25 bowhead whales from Cumberland Sound discovered that the whales have a flexible foraging strategy, meaning that they feed year-round, something that may help them better adapt to the warmer waters of a changing climate. (Photo courtesy of VDOS Global LLC, LGL Limited, Fisheries and Oceans Canada, WWF-Canada, University of British Columbia and Pangnirtung HTO)

Hunters, fishers and whalers have seen, and told stories about, bowhead whales inhabiting Cumberland Sound year-round, going back hundreds of years. Now, science can support that.

A study in the Marine Ecology Progress Series, published in June, found that although some whales were infrequent visitors, others would spend several months in Cumberland Sound and one spent an entire year.

To carry out this study, a team including Sarah Fortune, a postdoctoral fellow at the University of British Columbia’s Institute for the Oceans and Fisheries, spent four years tracking the seasonal movement and dive behaviour of 25 Eastern Canada−West Greenland bowhead whales.

At the same time, they collected zooplankton samples to determine what varieties were present, how abundant they were and where they were located.

Their goal was to better understand when, where and on what bowhead whales of Cumberland Sound were feeding and why they continue to return there.

“One of the neat things that we found in this paper for Cumberland Sound is that there’s actually evidence that the whales feed year-round,” said Fortune.

Winter fasting has been observed in other whale species, and Fortune found that the same was assumed for bowheads in other studies.

But Fortune’s data indicated that wasn’t the case here.

“They’re not fasting during the wintertime,” she said. “That’s something that was kind of unexpected.”

Kristin Laidre, a research scientist at the University of Washington’s Polar Science Center who was not involved with the paper, agreed.

“That’s new information for us,” she said. “It adds to our knowledge about how whales are foraging and when and where.”

Much of what is known about this population of bowhead whales comes from Western Greenland, in areas such as Disko Bay.

But according to Fortune, the whales there are mostly adult females that are not nursing, meaning that the diet and activity for the rest of the population is relatively unknown because they tend to segregate based on gender and age.

Although the whales feed year-round, it’s not consistent, said Fortune.

The availability of a year-round food supply could help explain historic observations of bowhead whales in Cumberland Sound.

“It’s quite clear that this fiord, this habitat has been a really important area for bowhead whales for hundreds of years,” said Fortune, referring to both the remnants of the Kekerten Island Whaling Station at the mouth of Kingnait Fiord and the ongoing Inuit subsistence hunts in the sound.

Traditional knowledge and expertise was also a crucial part of collecting the study’s data, including help from community partners Levi Qaunaq and Natalino Piugattak in Igloolik and Noah Ishulutaq and Timeosie Akpalialuk from Pangnirtung, who were all responsible for vessel operations.

“For any of these tagging studies, I would say the success is really attributed to the boat driver,” said Fortune, who was not involved with the tagging portion of this study.

Fortune also received help from and worked alongside the Igloolik and the Pangnirtung hunters and trappers organizations, the Government of Nunavut and Ricky and Peter Kilabuk from Pangnirtung.

“One of the great parts about the project was getting local insights from fishers and hunters and having reports of bowhead whales being observed in Cumberland Sound during the wintertime,” said Fortune.

“So hearing from folks that, ‘Yeah, bowheads are here year-round, we see them feeding near the floe edge during the springtime, we see these general movements where they’re distributed within Cumberland Sound in the spring and early summer and then they concentrate in Kingnait Fiord.’”

All of which are supported by Fortune’s data.

When Fortune began her research, she started by asking questions about whether the bowhead whales of Cumberland Sound would be negatively impacted by warming waters and changes in food distribution.

Before long, she ran into a problem. The baseline knowledge needed to answer those questions was missing, so she pivoted.

“I ended up asking some really kind of basic but important questions,” she said.

Now with that information in hand, she’s closer to answering her original questions.

“With this study, we don’t have a definitive answer for what the impacts of climate change may be, but I could say that there’s the possibility that there’s some good news here,” said Fortune.

“We see that the whales have a flexible foraging strategy, and by that I mean the whales are feeding year-round, not just in the summertime, so I think it provides a little bit more opportunity for individuals to maybe adjust when and where they’re feeding to ensure that they can get enough food.”

Fortune also found that the whales weren’t spending large portions of their days feeding, unlike their distant cousins, the right whale, which is one of the most endangered large whale species on the planet.

“They spend more than half their day feeding in the summertime so they have little flexibility and little room to adjust to a changing environment,” said Fortune.

Part of that might have to do with the quality of their prey, said Fortune.

Because of changing oceanic conditions, higher-quality food sources, such as those consumed by the bowhead whales of Cumberland Sound, have shifted north.

To an extent, the right whales have followed, but it’s also meant that they feed more on smaller, less nutritious and energy-rich varieties of zooplankton, meaning they have to spend more time to eat more to make up for that difference, “a quality versus quantity question.”

To make matters worse for the right whales, “there’s some evidence that they might fast during the winter,” said Fortune.

“So they might not have as long of a feeding season as bowhead whales do.”

But as northern waters warm, bowhead whales may also eventually be affected by a similar shift in food sources.

Because of this, Fortune would like to see more data on the whale’s prey.

“We need to know what the state of zooplankton is throughout the range of bowhead whales, so that we can forecast what the changes are likely to be in terms of species composition and abundance of zooplankton in the future,” she said.

As the climate changes and sea ice coverage continues to diminish, bowhead whales may also be faced with another challenge, one that has already taken a toll on their distant cousins: shipping.

“With right whales, they’re similar in their behaviour and their feeding,” said Laidre, “But one of the big issues are ship strikes.”

Because of their northern shift following their preferred zooplankton, right whales have expanded their feeding range to areas with high fishing traffic and shipping lanes such as the Gulf of St. Lawrence.

“Maybe it’s something to think about for the future for bowhead whales if we have increased shipping in the Arctic,” she said.

Fortune agrees. “Hopefully we can use the North Atlantic right whale situation to prevent something similar happening for bowhead whales.”

In addition to short- and long-term studies of bowhead food sources, Fortune would also like to see further monitoring of the whales themselves.

“One of the things we can do with repeat monitoring of bowhead whale behaviour is we can see whether their foraging effort is remaining constant across years or whether it’s increasing,” she said.

For Fortune, studying bowhead whales also provides a chance to be able to see a bigger picture of the health of the oceans.

“Bowhead whales in many cases are very indicative of the state of the ocean.”