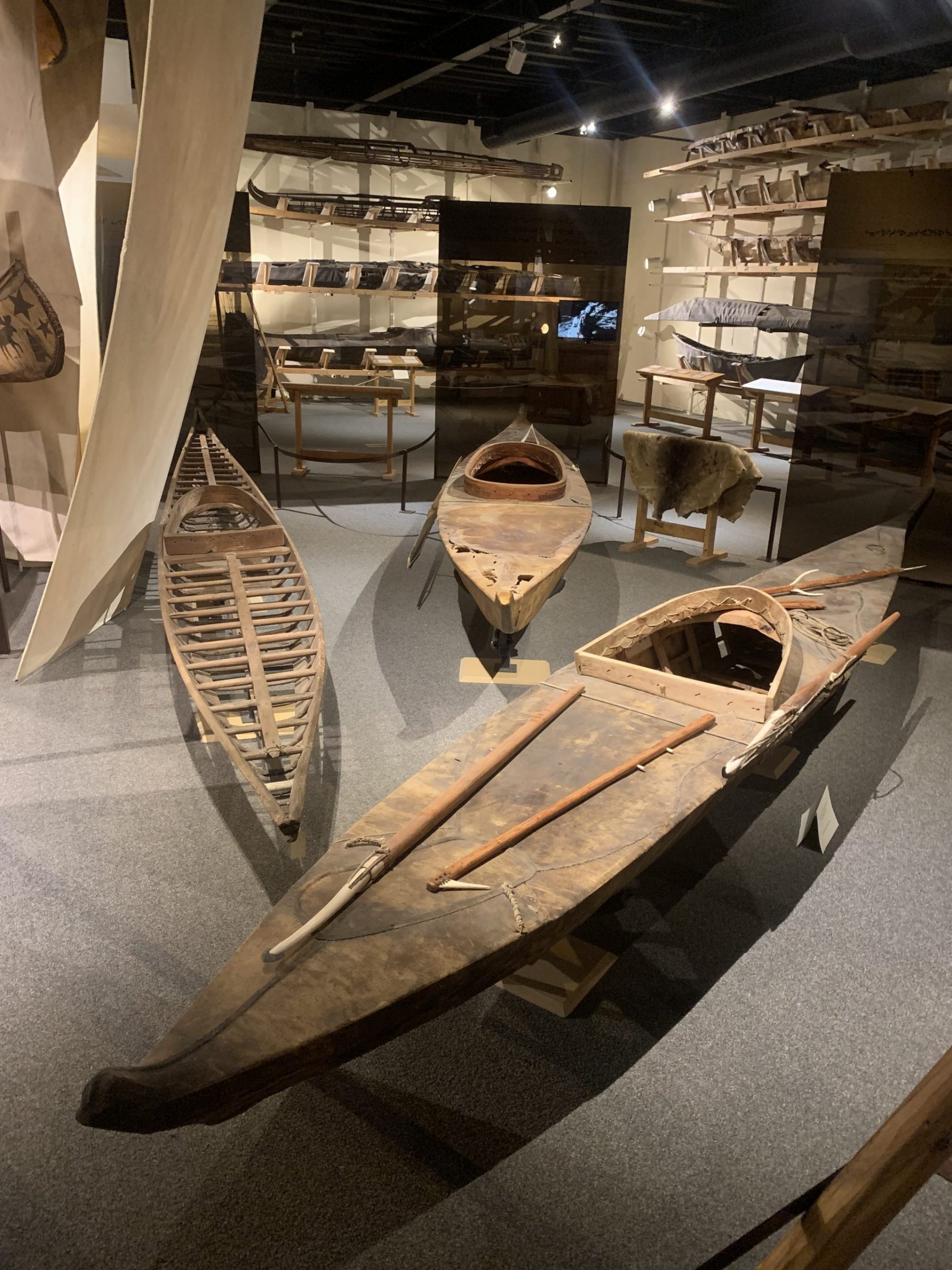 Nineteen kayaks are on display at the Canadian Canoe Museum in Peterborough, Ont. While the museum focuses on the canoe’s role in Canadian history, it also has a collection of kayaks to convey to visitors how they are built. (Photo by Robert Stewart)

The kayaks displayed at the Canadian Canoe Museum are sleek, like the otters sometimes seen swimming in the rivers and lakes of the nearby Kawarthas in eastern Ontario.

Each of the 19 Inuit kayaks on display was handmade by Arctic craftsmen. They built the wooden hulls and stretched the tanned sealskin hulls by hand, creating an engineering masterpiece. Each is a work of art — perfectly designed and built to suit the place from where it came.

The museum, founded in 1997 and located in Peterborough, Ont., focuses on canoes. However, its mandate is to display paddled watercraft from around the world, and it started collecting kayaks early in its history. Now it owns 68 kayaks and umiaks, which are wooden, open boats that can hold up to 30 people and tonnes of cargo.

It took years for museum founder Kirk Wipper, a University of Toronto physical education professor who died in 2011, to build a large personal collection of kayaks and canoes, which became the core of the museum’s collection.

The collection includes the wooden skeleton of a kayak from east Hudson Bay and a completed kayak from the same area. Others were added in 1977 and 1985 when Wipper acquired other collections.

Now the museum’s offerings include kayaks built across the Arctic from Greenland to the Bering Sea.

For some of the kayaks, the museum knows little more than where it was built.

Most were built in the Canadian Arctic, although one of the best-preserved ones is a traditional east Hudson Bay kayak, constructed at the Ontario Science Centre in Toronto in 1976 by a group of Inuit from the Nunavik village of Puvirnituq.

Another is from Nova Scotia where, in 1977, a group of Inuit visited to demonstrate their culture to a southern audience.

The newest addition to the collection hasn’t arrived in Peterborough yet. It was built in Puvirnituq by a class of high school students using traditional methods and taught by Alain Cloutier, a master builder. His grandfather built a kayak that is in the museum’s collection, and it was the model for this new one.

Details of construction techniques can often best be found by looking at existing kayaks, and Ward says the museum provides traditional kayak builders wide access to its collection.

“We are developing relationships with Indigenous communities and individuals to support them by making images and information about the watercraft available,” he said.

The Puvirnituq kayak is shrink-wrapped and bubble-wrapped to protect the thin, sealskin hull from damage. When it arrives later this spring, it will be carefully unpacked for display in the new museum building, which is expected to open in July 2023.

Each kayak has its own shape, and where it was built is factored into its design. 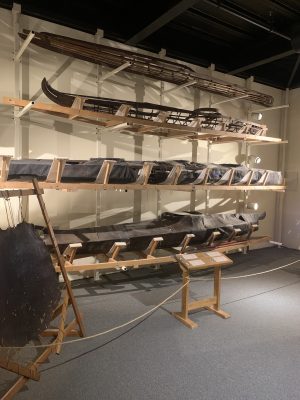 The kayak display at the Canadian Canoe Museum in Peterborough, Ont., shows the uniquely Inuit vessels in various stages of construction so visitors to the museum can see how they are built. (Photo by Robert Stewart)

For instance, a kayak used in the coastal waters off Baffin Island needs to be larger and more stable than one used in the quieter waters of Hudson Bay.

“The rich diversity in kayak shapes and construction across the Arctic reflects a combination of distinct cultural and regional designs with advanced performance characteristics best suited for hunting practices and paddling conditions where they are used,” Ward said.

An important part of the museum’s custodianship is learning the details of how and why each kayak was built the way it was. Although kayaks are now built and operated worldwide, most knowledge of traditional construction remains in the Arctic.

The museum’s exhibit projects manager, Laura Peers, says she wants to see the kayak collection become a living collection. Thanks to a grant from a major donor, she reaches out to Inuit communities and hires people with traditional knowledge of kayaks to collect information in the North. That helps museum staff explain traditional kayaks to people in the south.

The Canadian Canoe Museum “needs to be a place where communities come together” to share information, to cherish kayaks as a distinct type of boat which is unique to the Arctic, and share a common love of these engineering marvels, Peers says.

“We hope to work with Indigenous people to bring their voices and perspectives together with the watercraft to interpret them,” she says. “We hope that the museum will be a space where different sets of knowledge come together and we can all learn from each other.”

The Canadian Canoe Museum is located in a former boat-motor factory, but ground has been broken for a new museum along the banks of nearby Ottonabee River. Ward and Peers say they are excited about the possibilities the new site offers.

They plan to use traditional Inuit knowledge, called Qaujimajatuqangit, or to explain kayaks to a national audience and exhibit the collection in new ways, including online exhibits.

Both Ward and Peers say the work of learning about the museum’s kayak collection has only just started. Building a place where communities come together takes time, they say, but once those relationships are established everyone who appreciates kayaks will benefit.