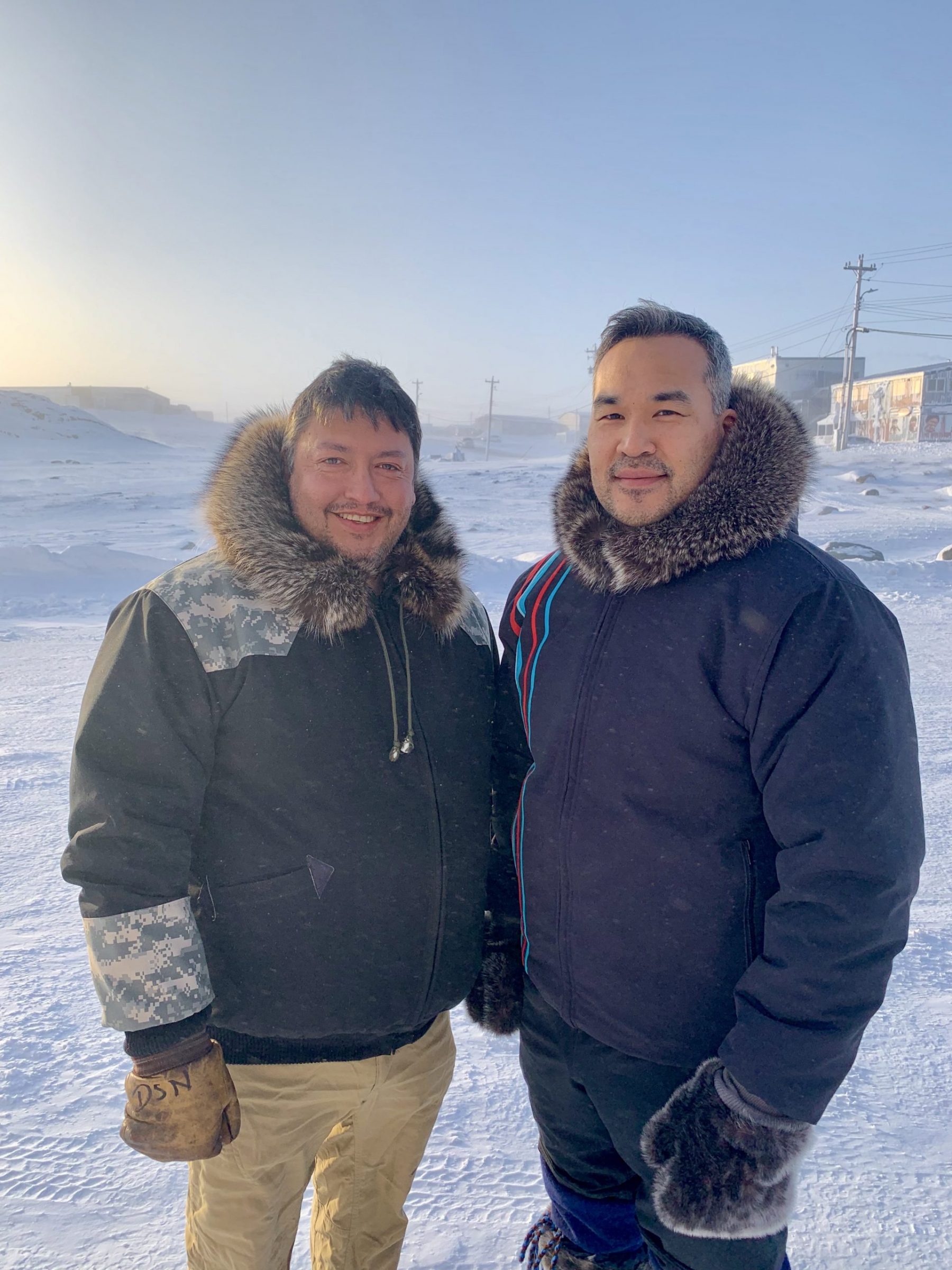 Duo goes behind the mics to call Olympic hockey in Inuktitut

For lifelong hockey fan Pujjuut Kusugak, doing live commentary for Olympic hockey games has been nothing short of exciting.

“The whole experience of doing play-by-play and colour commentating is one of the most absolute fun jobs I’ve ever done,” Kusugak said in a phone interview on his way to the commentators’ booth at CBC’s Olympic headquarters in Toronto.

Even more rewarding? Being able to call the games in his own language — Inuktitut, he said.

The pair, who used to coach minor league hockey together in their hometown, are part of a larger team providing coverage of the Games in Indigenous languages, such as Cree.

Ningeongan said so far his experience doing Olympic commentary has been “excellent.”

“This is phenomenal. It’s a great experience for a newcomer like me to be part of the team,” he said.

Ningeongan typically takes on the live play-by-play while the action is happening on the ice, he said. After the whistle blows, Kusugak takes over with colour commentating, sharing info about the players and helping with transitions between breaks.

Ningeongan got his start doing hockey commentary at local games in Rankin Inlet, while Kusugak, who served as the hamlet’s mayor from 2011 to 2013, started with the Vancouver 2010 Winter Olympic Games.

“It was so much fun. I thought I’d never get a chance to do something like that again, but this opportunity came up and I had to go for it again,” Kusugak said.

Getting used to the commentators’ booth and the buzz of the CBC studio has been a fun challenge for Ningeongan, he said, and as a hockey fan he’s enjoying seeing what the players bring to the arena.

“Covering the women’s hockey has been exciting for me because they are one of the greatest hockey teams in the world right now,” Ningeongan said of Team Canada, adding he admires the dedication the athletes give to their sport.

“I know they’ve committed so much of their own time to get ready for the Olympics and stayed away from their family and loved ones for many weeks, so I think that’s the moment where I’ve been able to kind of grasp what it takes to be an athlete at the Olympics,” he said.

Ningeongan’s favourite part of doing live commentary for hockey is when a player scores a goal, he said.

“That’s where the excitement happens…. You want your audience to be excited alongside what you’re saying, so that’s the best part and what makes me enjoy what I do,” he said. “We’re trying to keep our audience entertained as we follow along on TV.” 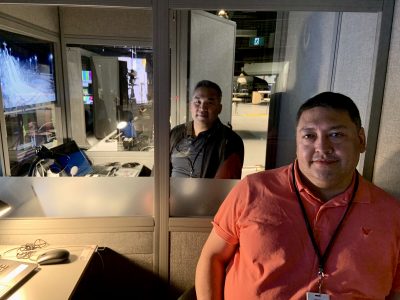 Kusugak, meanwhile, finds he loves helping unilingual Inuktitut speakers enjoy the “finer points” of a hockey game by working out the translations for terms such as interference, offside and icing.

Coincidentally, Ningeongan and Kusugak are calling Olympic hockey in the same month that Nunavut is marking Uqausirmut Quviasuutiqarniq, an annual “celebration of our language.”

“Being able to use our language is so important for the preservation and strengthening of it,” Kusugak said. He said opportunities to promote Inuktitut on this scale “don’t come by very often” so he feels it’s especially important to take advantage of them.

Both Ningeongan and Kusugak said they’d love to have more opportunities to advance Inuktitut-language commentating for sports, and encourage anyone interested in it to take a shot.

“For anybody that wants to try something like this, I absolutely encourage them to just give it a shot, do it for fun,” Kusugak said. “Just try to enjoy it but also see it as an opportunity to showcase and strengthen our language.”

Kusugak said he hopes their Inuktitut coverage during these Winter Games helps a wider audience enjoy the hockey matches, especially for family and friends back home in Rankin Inlet, a town he called “hockey-crazy.”

“We have an amazing minor hockey support system for the kids that like to play, and parents and volunteers and family members like to get involved in hockey … it’s not just about the sport,” he said.

Rankin Inlet runs a hockey camp every year and at the start of each season coaches “talk about the importance of healthy living, teamwork and being involved with the community, so hockey is almost like a rallying point and something common that the people of Rankin really do support,” Kusugak said.

“I just really hope that we can see something like this again in the future, and not just for hockey but other sports or other events where it promotes our language and culture,” Kusugak said.

On Thursday, CBC North will begin broadcasting the men’s games on the radio with Ningeongan’s and Kusugak’s Inuktitut commentary. First up will be Canada vs. Germany.

The 2022 Winter Olympics will run until Feb. 20, when the men’s gold-medal hockey game will air.