‘Even-keeled’ Mary Simon ‘excited’ to be home in Nunavik 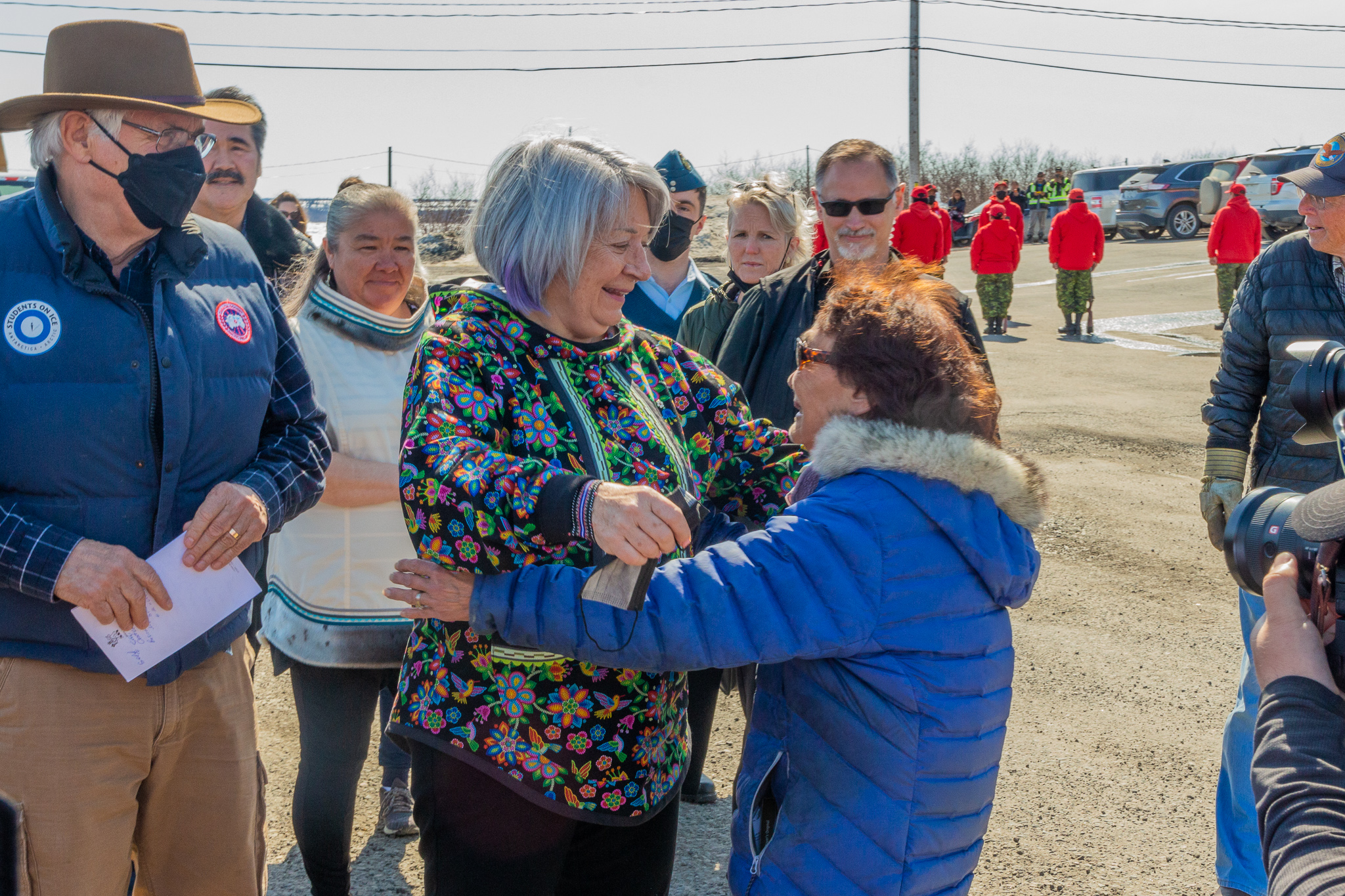 There’s no Inuktitut word for “Her Excellency” — the official title given to Gov. Gen. Mary Simon.

Sarah Aloupa, one of the local officials waiting to welcome Simon on the first day of her visit to Nunavik on Monday morning, pointed that out to reporters assembled in the Makivik Corp. boardroom in Kuujjuaq Monday morning.

Simon, who calls Kuujjuaq home, is visiting the region for the first time since before the COVID-19 pandemic and the first since becoming the Queen’s representative in Canada nearly a year ago.

The first stop on the first of Simon’s five-day tour of the northern Quebec region was a meeting with representatives from Nunavik organizations at the headquarters of Makivik, the organization created to uphold the constitutional rights of Nunavik’s Inuit population.

Simon reminisced about some of her childhood memories around Kuujjuaq, including camping on the land with her friends.

She said it all came back to her as her plane made its final approach over the town.

“I don’t get excited hardly ever, I’m sort of on an even keel, but when we were about to land here yesterday, I was thinking about my early childhood,” Simon said. “It was really nice to be home, I haven’t been here for almost three years because of the pandemic.”

Simon, a former Makivik president, and Aatami talked about the importance of furthering Inuit self-determination in Nunavik, and the need for the Quebec government to appoint a negotiator in those talks. Aatami resurrected the idea of self government in 2021 after returning to Makivik’s presidency.

The two also discussed bringing better health care to the region with the establishment and construction of a new and improved hospital.

After Makivik, Simon and her entourage rolled down the hill to Kuujjuaq’s northern village building for a meeting with Mayor Mary Johannes and the town council.

Dozens of local residents, who wanted to get a glimpse of their hometown hero, greeted Simon. She shook lots of hands, shared hugs with friends and family, and visited several organizations in Kuujjuaq during the first day of her Nunavik tour.

“Mary was my very best friend growing up… I’m so proud of her, and we miss her though,” said Louisa Berthe May, Simon’s childhood best friend and sister-in-law.

May joked about Simon’s older brother, bush pilot Johnny May, “going after” her when they were all younger before they eventually got married.

After greeting Simon with a warm embrace, May also reflected on the significance of Canada’s first Inuk governor general coming home.

“Us Inuit, now we’re really a part of it, it’s really something that [we] had planted in our hearts,” she said. “She’s a very strong lady, very strong.”

After wrapping up her meeting at with Kuujjuaq’s council, Simon’s entourage drove south of Kuujjuaq to a site where the Isuarsivik Recovery Centre works to heal Inuit facing addictions by giving them cultural experiences on the land.

There, Simon was greeted with a throat singing and drumming performance by musicians Sandy Emudluk and Janice Parsons. She met with Isuarsivik staff and patients, and she enjoyed a varied serving of country food for lunch, including caribou soup.

“I’m really proud of what you’re doing, very proud, and I think it’s one of the most important things you’re doing in Nunavik to help people heal,” Simon told the staff.

After lunch, Simon headed to the construction site of what will be Isuarsivik’s new centre.

As part of her Nunavik tour, Simon is scheduled to speak to students at schools in the four communities she plans to visit. At Jaanimmarik High School, she encouraged students to remain focused on education and to continue using Inuktitut in everyday life.

Simon also answered questions from students curious about her work as Governor General, as well as some more serious topics.

One student asked Simon if Inuit youth should be hopeful about positive change in the North. Her short answer — yes.

“We should always be hopeful, I think as long as we’re making changes, sometimes it could be very slow, but we always have to have hope,” she said.

Simon’s final stop of her day in Kuujjuaq was at the Tusaajiapik Elders’ Home to meet with some of the residents, closed to media. Her Nunavik visit is set to continue Tuesday with a day trip to Kangiqsuallujjuaq, the community where she was born.