“I thought it would be boring, but it was awesome.” 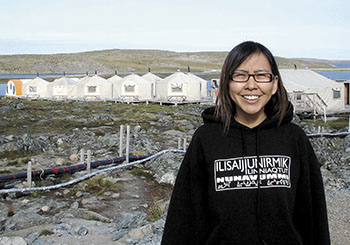 Sherri Ikuutaq, 28, of Baker Lake, who now studies at McGill University in Montreal, was a team leader and interpreter at this summer’s Alliquujattiavait Kivalliq “Gems” program at the Meadowbank mine near Baker Lake. (PHOTO BY JANE GEORGE) 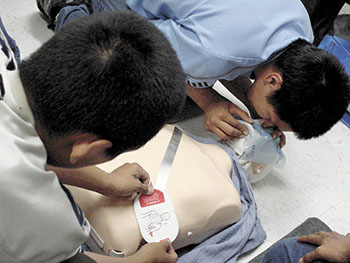 As part of a First Aid course, two participants in the Alliquujattiavait Kivalliq “Gems” program learn how to defibrillate on a mannequin. (PHOTO BY JANE GEORGE) 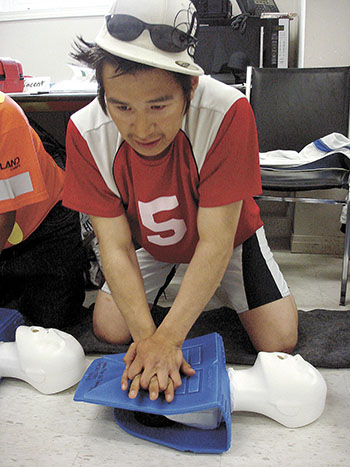 Vincent Ningeongan of Coral Harbour works hard to administer cardiopulmonary resuscitation during a first aid session during the Alliquujattiavait Kivalliq “Gems” program at the Meadowbank mine near Baker Lake. (PHOTO BY JANE GEORGE) 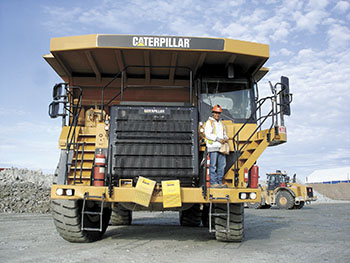 Abe Kadluk of Chesterfield Inlet is all smiles as he prepares to spend the day job shadowing a heavy equipment operator who drives a 100-tonne truck at the Meadowbank mine near Baker Lake. (PHOTO BY JANE GEORGE) 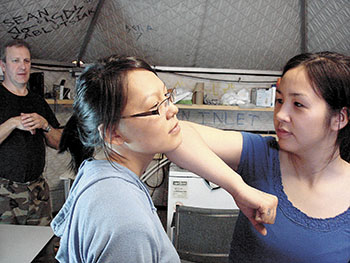 Shawnee Nakoolak and Amelie Netser, both of Coral Harbour, practice some defensive moves during a workshop on self defence, part of the one-month long Alliquujattiavait Kivalliq “Gems” program at the Meadowbank mine near Baker Lake. (PHOTO BY JANE GEORGE)

MEADOWBANK MINE (APUTINAAQTUQ) — Saving a life in an emergency situation isn’t easy, but if you know how, at least it’s possible.

Similarly, making your way in the world can also be tough, but if you have the know-how— and a job you like, life can be easier.

These are among many lessons gleaned by a group of youth who attended this summer’s Alliquujattiavait Kivalliq “Gems” program at the Meadowbank gold mine near Baker Lake.

The 14 youth, 16 to 18, lived on the mine site for four weeks, where they saw up-close the kinds of jobs that are available in the mining industry and some skills they would need at work.

During the program’s introduction to first aid techniques, Vincent Ningeongan got a workout administering cardiopulmonary resuscitation, known as CPR, to a plastic mannequin, whose chest was surprisingly resistant— just like a real person’s.

Ningeongan and the others learned that CPR involves chest compressions to create artificial circulation, while the rescuer breathes into the mouth to inflate the lungs and pass oxygen into the blood.

The first aid course also provided instruction in how to apply a defibrillator, which gives a jolt designed to kick-start a heartbeat.

“I thought it would be boring, but it wasn’t. It was awesome!” said Troy Scottie of Baker Lake.

During the course of the month-long program, program participants also tried their hands at various jobs around the Meadowbank site.
Abe Kadluk spent a day riding around on a 100-tonne truck as it hauled rocks, while another group learned how to use GPS in Baker Lake.

A group of girls also learned some self-defence skills.

The program also included days devoted to the study of geology as well as a session on how to apply for a job, go through an interview and write up a resumé.

Elders were part of the program, helping the youth with traditional activities, such as soapstone carving, duffle-making and land survival skills.
The varied program is designed to show there are lots of interesting jobs in mining, said Catherine Niemi, the Alliquujattiavait program supervisor.
The tight schedule also gives an introduction to the basic skills of working at a mine site, such as waking up on time.

The teenagers, who lived in a tent camp nicknamed “Chinatown,” had to be ready by 8 a.m. or even earlier. Some woke up as early as 5 a.m. because they were eager to start the day.

Many had close relatives working at the mine site like Joan Teenar of Whale Cove, whose aunt Simona Teenar is a heavy equipment operator and says she “loves it.”

Not one of the 14— who came from every Kivalliq community but Repulse Bay— asked to go home during the program.

“That in itself is a success,” said Niemi.

Everyone received $10 an hour for participation in the program, plus a bonus based on effort.

The Baker Lake company holds a variety of contracts at Meadowbank, where it hires as many local workers as possible.

The youth program, which was supported by Agnico-Eagle, $178, 000 from the Government of Nunavut, via the Kivalliq Inuit Association, the Kivalliq Partners in Development and Calm Air, ran from July 14 to August 12.

For their closing ceremonies in Baker Lake, participants, wore hoodies, which they designed at the Jessie Oonark Centre, before heading back home.

A similar youth program is also in the works for the Meadowbank mine next year. The plan is to include a second-year program for returning participants who want to work at the mine during the summer.