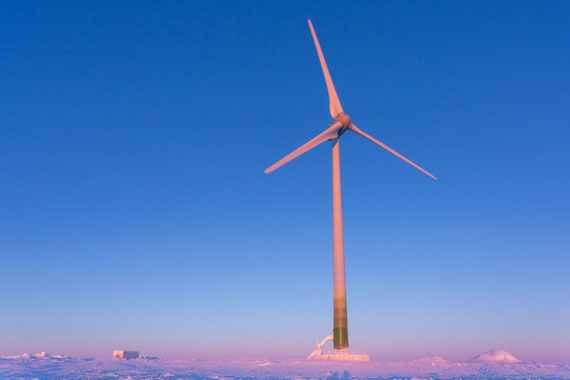 The federal government has announced $7.6 million in funding for three clean energy projects across Nunavut.

The Qikiqtaaluk Business Development Corporation will receive $6.5 million for a wind turbine and battery system in Sanikiluaq, according to a Natural Resources Department news release issued Tuesday.

The project is expected to generate four million kilowatt-hours of energy per year, which would replace 50 per cent of diesel fuel that’s used for producing electricity.

The corporation said, in an email to Nunatsiaq News, that there will be 10 turbines and that it expects the project to be completed in fall 2023.

“This project will boost local economic development and will enhance energy security for the hamlet,” Sanikiluaq mayor Johnnie Cookie said in a news release.

NRStor Inc. and the Hamlet of Arviat will receive $750,000 for an engineering study for a wind, solar and energy storage system.

The two partnered together in 2017 with the goal of providing a community-led clean energy project that would reduce reliance on diesel.

The engineering study will also include investigating power-purchase agreements, which is when a company sells energy to other private or public organizations.

Lastly, the Government of Nunavut will receive $400,000 to develop community energy plans.

The plans will look at how much energy each community consumes for heating, transportation and electricity, and identify challenges for providing and developing clean energy projects, said Department of Environment spokesperson Casey Lessard.

“The planning process is unique to each community and draws on a number of frameworks developed for other Indigenous communities as a reference,” Lessard wrote in an email to Nunatsiaq News.

The government currently has four communities approved for funding to develop energy plans, two of which are in the Kivalliq region, said Lessard, without specifying which communities they are.

The deadline for the plans to be completed was extended to 2023 due to the pandemic, Lessard said.

The projects were funded through the clean energy for rural and remote communities program, which is an eight-year, $220-million federal program that invests in energy projects to reduce dependence on diesel fuel.

“Each of these initiatives will help create a cleaner, healthier and more prosperous future for Nunavummiut and all Canadians,” wrote minister of northern affairs Daniel Vandal in a press release.