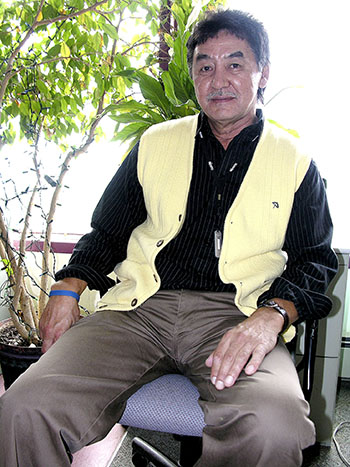 Peter Ittinuar was one of three Inuit sent to southern Canada in the early 1960s to live with non-Inuit families and attend school in Ottawa alongside non-Inuit children. (FILE PHOTO)

The Iqaluit audience inside Alianait’s big top knew Zebedee Nungak had the best line in the moving documentary film, The Experimental Eskimos, when they watched it’s Nunavut debut June 28.

The 200-plus people, shivering inside the tent on a wet, windy Sunday evening, erupted into spontaneous applause when, in a piece of archival footage from one of the early 1980s constitutional conferences on aboriginal rights, they saw a determined Nungak say this to ex-Prime Minister Brian Mulroney:

“If it’s not going to be done in my generation, I have my son behind me who will take up this fight with your son and your son’s sons.”

It was a powerful moment in Barry Greenwald’s powerful film, co-produced by Iqaluit’s own Alethea Arnaquq-Baril, that traces the lives, from childhood to the present, of three Inuit men who have been intimately involved in the story of self-government for the Inuit of eastern Canada.

Nungak, from Puvirnituq, Nunavik, and Peter Ittinuar and Eric Hannan Tagoona, from Rankin Inlet in the Kivalliq, were only about 11 or 12 years old when they were taken to Ottawa in 1962 in a federal experiment to help academically inclined Inuit children develop leadership skills from a southern quality education.

In Ottawa, they were told, they would experience the “fairytale life of Dick and Jane,” living with middle-class Qallunaat families and attending Ottawa schools.

“At that time, we felt we had to say yes to everything the government said,” Tagoona recalls in the film. “People thought the whites were superhuman, and you just didn’t say no.”

Of course, it was no fairytale, not by a long shot, as the three boys struggled with loneliness, racism and loss of culture through separation from family and community.

But they did gain educations that the bureaucratic devisers of the experiment might have later felt came back to bite them in the butt.

All three men went on to use skills learned in the Qallunaat world to play decisive roles in the development of modern Nunavut and Nunavik.

Nungak became a negotiator for the Inuit in hammering out the James Bay Northern Quebec Agreement and in the accompanying creation of Makivik Corp., which he would lead from 1995-98.

Ittinuar and Tagoona had early positions with the newly formed Inuit Tapirisat of Canada, with Tagoona serving as president of that organization for two years.

And Ittinuar went on to become the first Inuk elected as a federal New Democratic Party MP for the eastern Arctic in 1979.

All three played prominent roles in ensuring Aboriginal rights were enshrined in the 1982 repatriation of Canada’s constitution.

“We tricked them into it,” Tagoona recalls, with an enigmatic smile.

Also in November 1982, Ittinuar crossed the floor of Parliament, joining Pierre Trudeau’s governing Liberal party in exchange for an agreement to partition the Northwest Territories, a deal that paved the way for the creation of Nunavut.

He now calls that deal the death knell for his political career. “People never forgave me.”

As time went on, the demons these men had collected, both in their childhoods away from home, and in the political pressure cooker of those early adult years of leadership, caught up with all three of them.

Ittinuar would be charged with — and acquitted of — theft, forgery and breach of trust, and later pled guilty to charges of assault and cocaine possession. And he lists substance abuse and failed relationships, both personal and communal, as among the prices he paid.

Nungak speaks of a severe alcoholism that led to his resignation under a cloud as president of Makivik. And he still faces discord, both in his home community and in his family, over signing the JBNQ agreement.

Ittinuar also refers to a drug-fueled decline for Tagoona, who refuses to talk about it for the camera. He does mention a broken marriage as part of his troubles, blaming it at least in part on his constant travels during his time with ITC.

Tagoona now lives as a virtual recluse in Baker Lake, with no phone and little contact with the rest of the community or the world. He is clearly the least comfortable participating in the film.

All three are trying to make their peace with the past, and part of that process includes a joint lawsuit against the federal government. It wasn’t until 1997 that a researcher told them they had been pawns in this grand educational “experiment.”

In the end, what remains in the memory from this film, are images of the haunted eyes of each of these three men, who gave much to their people, and won much for them, at great personal cost.