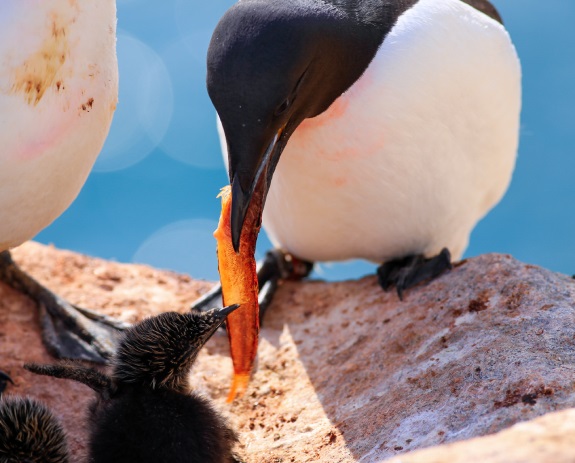 A thick-billed murre is seen feeding its young on Coats Island. Nunavut’s first case of avian influenza has been confirmed in a bird found on Coats Island, the GN announced Thursday. (File photo by Douglas Noblet)

The first case of avian influenza has been confirmed in Nunavut, the territory’s Department of Health said Thursday.

The case was detected in a live thick-billed murre on Coats Island as the Canadian Wildlife Service was conducting surveillance testing on July 12, it said in a news release.

The public’s risk of avian flu infection is considered low, the department said, adding there’s no evidence indicating it can be transmitted to humans by eating fully cooked game birds or eggs.

Generally, infection in humans occurs when a person has had close, prolonged contact with infected live or dead poultry or with environments that are contaminated.

Signs of possible infection include the bird trembling or showing lack of co-ordination, swelling around its head, neck or eyes, diarrhea or sudden death, or finding numerous dead birds in one location.

So far avian influenza has been detected in wild birds in every province, the Yukon and parts of the United States.

The department said the Government of Nunavut will not continue reporting confirmed cases now that its presence in the territory is confirmed.

It advises anyone who sees a possibly infected bird to contact the local conservation office. Anyone feeling ill after handling a bird should contact their local health centre.