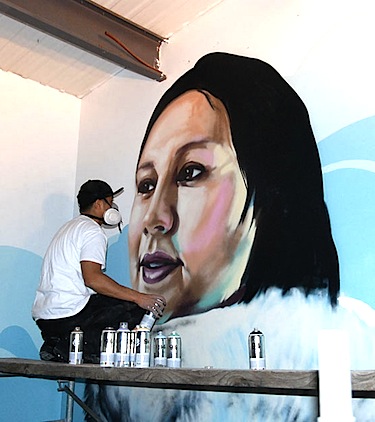 Jonathan Cruz is seen painting a mural in Puvirnituq’s community hall in 2012. The former Iqaluit-based artist faces a series of assault charges in the Ottawa area. (File photo)

Jonathan Cruz will appear in Gatineau court on Sept. 29

A former Iqaluit resident and well-known design artist faces multiple assault charges related to a series of incidents in the Ottawa area in 2020.

Jonathan Cruz, who grew up in Toronto, is best-known for his murals, which adorn walls and buildings across Nunavut and Nunavik.

Cruz, 39, faces a charge of assault, assault causing bodily harm and mischief stemming from a Nov. 24, 2020, incident in Ottawa.

This past July, an Ottawa Crown prosecutor authorized the transfer of those charges to a Quebec court in nearby Gatineau on the Quebec side of the Ottawa River. There, Cruz faces additional charges of assault with a weapon, assault causing bodily harm and mischief, all allegedly committed against the same woman as his Ottawa-based charges.

The transfer of charges was signed by assistant Crown attorney Ryan Seifried on July 16, with a request to the presiding judge in Gatineau to “adjudicate on a plea of guilty.”

The Crown has asked for a suspended sentence for Cruz with 24 months probation, an order for the accused to seek counselling, an order to have no contact with the victim and to prohibit Cruz from owning or using firearms.

Cruz is set to appear in Gatineau court on Sept. 29.

Cruz first moved to Iqaluit in 2001 and later founded the Nuschool Design Agency, through which he secured contracts painting murals in and outside of buildings across Nunavut and Nunavik.

His work is featured prominently on the driveway leading to the Qikiqtani General Hospital, in community centres in Igloolik and Puvirnituq and on the youth centre in Kuujjuaq, to name a few.

Cruz was acquitted of another series of assault charges against a former partner in Iqaluit in 2016.

He relocated to Ottawa shortly afterward, where he relaunched his design business under the name NUSKU.