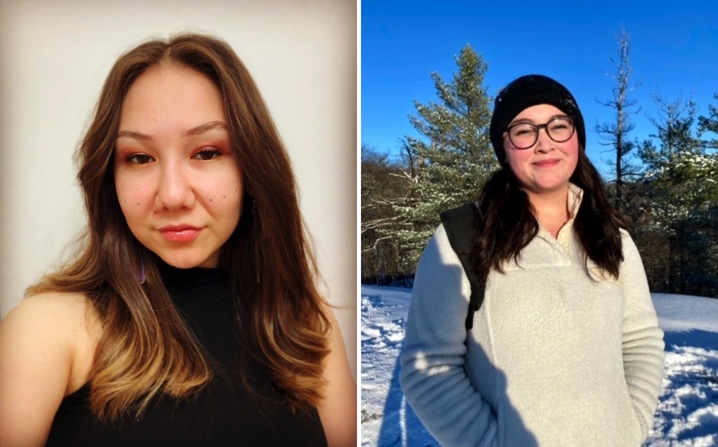 First-year Nunavut Sivuniksavut students Shelby Angalik (left) and Kim Pilgrim (right) say their mental health and sense of security has been impacted by constant noise and disruption caused by the Freedom Convoy, which has set up encampments in downtown Ottawa. “It’s making us fearful,” said Pilgram. (Photos courtesy of Angalik and Pilgram)

Shelby Angalik, a Nunavut Sivuniksavut student, says it has been hard to study for more than a week, with the blare of truck horns and shouts of protesters infiltrating her downtown Ottawa home. She says the “incessant” noise is like having a train going past her window.

“Having to focus on doing schoolwork and just anything around the house has been difficult unless I’m wearing earphones or trying to drown it out with something else like a show,” Angalik said.

Angalik, who is from Arviat, is a first-year student at Nunavut Sivuniksavut, an Ottawa school in Ottawa for Inuit youth studying an Inuit-focused post-secondary curriculum.

The school is on Rideau Street, one of several streets in the capital’s downtown that have been blockaded since Jan. 28 by demonstrators calling themselves the Freedom Convoy.

Initially billed as a convoy led by truck drivers protesting vaccine mandates for cross-border travel, the demonstration has grown to include people demanding an end to all pandemic vaccine mandates and health restrictions.

The demonstrations have blocked off streets near Parliament Hill, forcing many businesses to close and residents to endure days of seemingly non-stop noise and disruption. Some city officials call the protest an “occupation.”

Angalik lives near the school and said the noise has affected her sleep and mental health.

“It was driving me crazy because it’s so loud, basically it went on nonstop for three days,” she said. “It would start early in the morning and then they would continue honking till maybe 3 a.m.”

Though classes are still being taught remotely, Angalik said she and other students in Ottawa had been visiting the school for group study sessions. When the Freedom Convoy arrived, though, they could no longer access the school.

“It’s definitely taken a toll on my mental health, being afraid of what could happen if I go out downtown near the centre of it,” Pilgrim said. “It’s been in my neighbourhood — there’s been truckers driving around with the flags and honking at all hours of the night.”

Both Angalik and Pilgrim said they’ve been putting off going to the grocery store because of reports of unmasked people entering stores.

“I’ve been more afraid of contacting COVID than before,” Angalik said. Pilgrim added she’s worried for the people who work at grocery stores and any immunocompromised people who could be shopping there.

The pair said they are particularly concerned they’ll be harassed if they go near the demonstrators.

Several organizers of the demonstrations have ties to far-right, extremist organizations. Footage from the first weekend of protests showed some people waving Nazi and Confederate flags, and downtown residents have reported being targeted and harassed for wearing masks in public.

“I’ve been completely avoiding going near downtown from all the horror stories I’ve heard from people being harassed, having things thrown at them, their masks removed and the racial slurs that have been thrown out and the violence that has ensued on people,” Pilgrim said.

“Being a young Indigenous woman, I already have some sort of internal fear of these aggressive men,” Angalik added. “Trying to go to Loblaws to go grocery shopping and seeing these huge, aggressive men without masks standing right in front of the doorway.… I’m afraid of going out.” 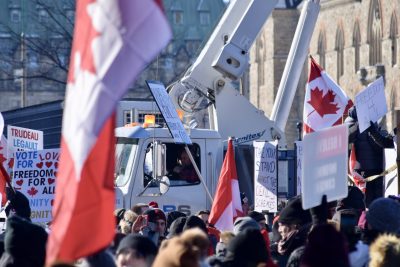 Supporters of the Freedom Convoy gather near Parliament Hill in Ottawa on Jan. 29 protesting government vaccine and health mandates. (Photo by Madalyn Howitt)

Inuit organizations in Ottawa have denounced the protests, saying concerns about harassment and noise have impacted their ability to support urban Inuit.

A Feb. 3 statement from Tungasuvvingat Inuit urged demonstrators to “go home” so vulnerable urban Indigenous communities could “feel safe again and regain access to cultural programming and essential services.” The Inuuqatigiit Centre For Inuit Children, Youth and Families issued a statement the following day that the organization has experienced a “major disruption” in its ability to provide programming “in a safe setting” due to the ongoing demonstrations.

Angalik said the impact of the demonstrations on Ottawa’s Indigenous communities worries her.

“It’s surprising how the police and how the government have not really been taking control of the protests here, compared to how they treat Indigenous protesters. It makes me really angry because it’s so clearly so unfair,” Angalik said. “If this were an Indigenous protest, it would not be handled like this.”

“People don’t have the freedom right now to be against this protest. If I were to go and scream at them today, it would be very dangerous, from the things I’ve heard from women in my life and people of colour,” she added.

On Sunday, Ottawa Mayor Jim Watson declared a state of emergency in the capital.

Pilgrim and Angalik said they’re hopeful that the demonstrations will end soon, but they’re taking it one day at a time.

“I don’t think it’s right to silence people who want to protest for what they believe in, but when it has the impact that this has had on minorities and people just trying to live their lives, I think there needs to be some steps taken,” Pilgrim said.

“This freedom protest is impeding on other people’s freedom of being able to walk safely down the streets,” Angalik said.

“This is not about freedom anymore. It’s freedom for a specific group of people.”