GN, federal employees to get holiday to mourn Queen Elizabeth

Private sector employers are welcome to take the day off, but not obligated, says GN 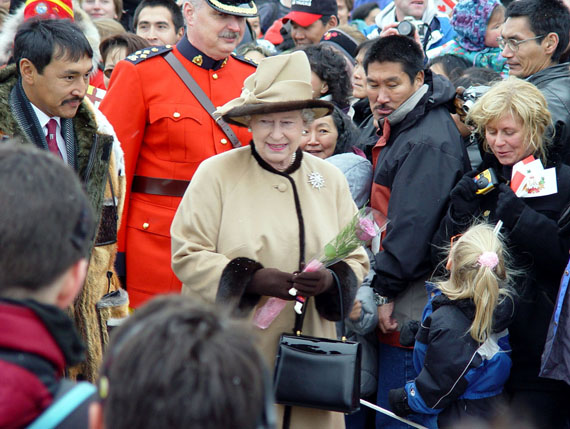 Queen Elizabeth, who died Sept. 8, does a walkabout in Iqaluit during the last royal visit to Nunavut, in October 2002. The Nunavut government announced Thursday it will shut down offices on Sept. 19 to mourn her. (File photo)

The Government of Nunavut will join the federal government in giving its employees the day off on Sept. 19 for the National Day of Mourning for Queen Elizabeth.

The Queen died Sept. 8 in Scotland. She was 96 years old and served as the Queen of Canada for 70 years.

Thursday morning, the GN announced it would also close its offices for the day.

“Private employers are welcomed to follow suit but are not required to do so,” stated Matthew Illaszewicz, communications manager for the Human Resources Department, in a news release.

Premier P.J. Akeeagok did not respond to an interview request about the holiday.

Nunavut Commissioner Eva Aariak has a book of condolences at her office that Iqalummiut can sign between 1 and 5 p.m. until Sept. 20.

Alternatively, Nunavummiut can send a virtual condolence on the Canadian government’s website.

In a statement, Aariak shared memories of the Queen’s visit to Iqaluit, then known as Frobisher Bay, in 1970 and Rankin Inlet in 1994, when children greeted her by saying, “Queen Elisapi.”

“[The Queen] had said that diversity was a strength and that we should respect the differences between us but never let our differences make us intolerant,” Aariak wrote.

Provinces and territories are observing the day of mourning in various ways.

Prince Edward Island was the only province to declare it a statutory holiday, which mandates Monday as a holiday in both the public and private sectors.

Employees will not get the day off in Nunavik, as Quebec has made the decision to not declare Monday a public holiday.

There’s been no word on if there will be an accession ceremony in Nunavut for King Charles.

Provinces, such as New Brunswick and Ontario, held ceremonies that included speeches from the lieutenant-general and a 21-gun-salute.

On Sept. 10, Akeeagok released a statement congratulating Charles on becoming the new monarch.