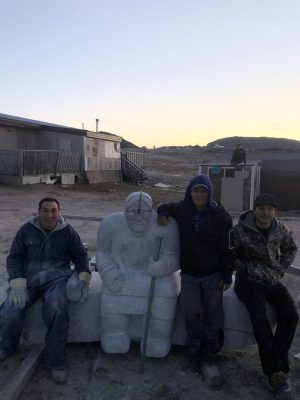 Starting from the left, Koomuatuk Curley, Ningeosiak Ashoona and Kellypalik Ashoona sit by the statue they carved of the legendary Inuk artist and family member, Pitseolak Ashoona. (Photo courtesy of Koomuatuk Curley)

Carving a statue outdoors in a Kinngait winter would be a daunting challenge for many, but for Koomuatuk Curley, doing so is a family affair.

Curley is leading a family effort to carve a statue of his great-grandmother, the legendary Inuit artist Pitseolak Ashoona. The effort started last year when Curley had the idea to apply for a $50,000 grant from the Government of Nunavut to carve the statue. He is joined by his father Teetee Curley, his sister Ningeoseak Ashoona and his nephew Kellypalik Ashoona.

Curley, 37, said he’s motivated by what great-grandmother meant to him and to the community.

Ashoona was a prolific artist in the 1960s and 1970s, drawing pictures that depict traditional Inuit life. She received the Order of Canada in 1977. But she did not have a statue in her hometown of Kinngait, Curley said, and he wanted to change that.

“We wanted to commemorate her hard work and effort,” said Curley.

The statue of Ashoona will show her sitting on a bench, to represent how she used to rest on the way to selling her art at the co-op in Kinngait, said Curley.

As Curley grew up in Kinngait he knew he also wanted to be an artist. His great-grandmother was an influence, but he leaned towards carving because of his grandfather, Kaka Curley.

“My grandfather carved for a living and I wanted to be like my grandfather,” Curley said.

Polar bears were one of the first animals he carved. He said that he also drew or carved whales, birds and people.

“What’s around me up north was what’s inspiring,” said Curley.

Now, for the past four and a half years, Curley has been able to make his passion a career as a professional artist.

With Curley currently living in Ottawa since 2017, he needed to go to Kinngait to carve the statue. But Curley said he did not feel comfortable with travelling until March because of the risk of contracting COVID-19.

By then, working outdoors in the cold was one of the big challenges, with an average temperature of around -20 C.

“The cold pressure was challenging but everything else was pretty smooth,” said Curley.

Curley said his sister and nephew picked out the stone around Kinngait before he arrived. They chose granite, Curley said, because that is the type of stone that lasts the longest.

Carving granite involves several steps, said Curley. First, Curley, his sister and his nephew needed to use a diamond-tipped saw to get a rough shape of the statue. While such saws can cost up to $15,000, diamond is the best material to cut through hard rock like granite, said Curley. To get a further definition of the statue’s shape, they used a hammer and chisel. Finally, for finer details, Curley used an angle grinder.

Curley had to leave for Ottawa in June, so his sister and nephew continued their roles as carvers while his father was the supervisor, he said.

Curley returned in September for the final touches to the statue. The unveiling of the statue will happen in the spring, Curley said, when the foundation that the statue will sit on at the airport is set.

For Curley, this was the type of project he said that he dreamed of since he was a child.

“For us to be able to do a statue of her was quite special,” Curley said.

“Who gets to carve their great-grandmother?”