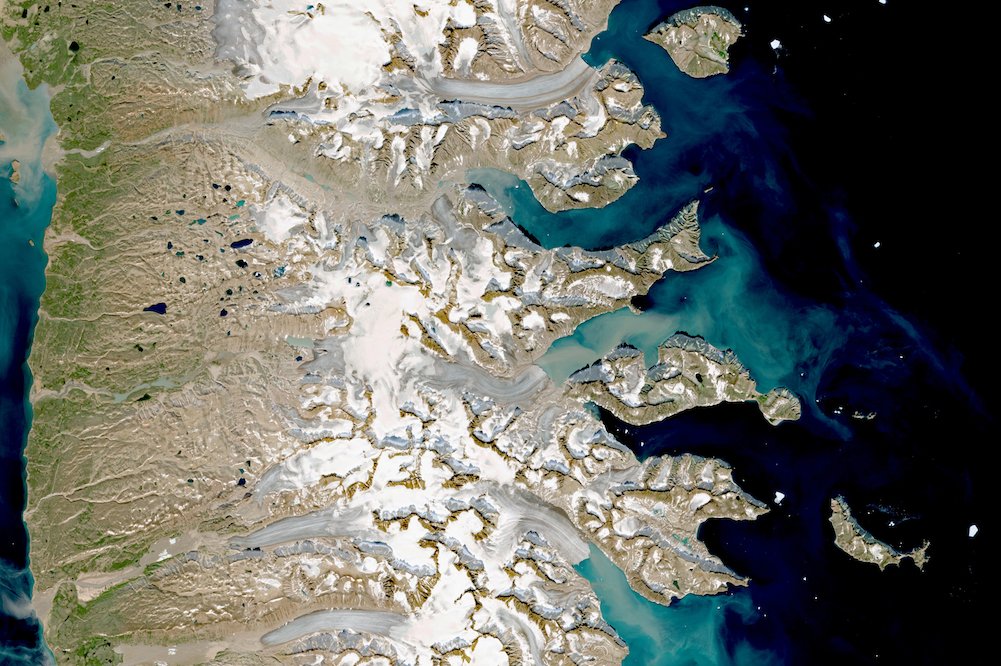 This image, acquired by one of the Copernicus Sentinel-2 satellites on July 28, 2021, shows a huge discharge of sediment into the Arctic Ocean by glaciers melting around Constable Pynt, Greenland, during a period of unusually high temperatures. (European Union, Copernicus Sentinel-2 imagery – Processed by @DEFIS_EU)

Greenland said Monday it will join the 2015 Paris climate agreement that seeks to head off temperature increases that will lead to catastrophic climate degradation.

Speaking during the UN’s COP26 climate summit in Glasgow on Monday, Premier Múte B. Egede said his government would give up Greenland’s exemption from the landmark agreement and seek to have the country’s national assembly commit to deliver objectives for reducing greenhouse gas emissions.

“COP26 is a key moment for all governments to show their commitments to curb global warming. This is indeed our last, best chance. Greenland will do its part, and we hope that the rest of the world will do the same,” Egede said.

Greenland supported the adoption of the Paris Agreement but in 2016 it was granted what is known as a territorial reservation, which meant that it did not need to abide by the carbon pollution goals set by Denmark on behalf of the entire Kingdom of Denmark.

The argument at the time was that doing so would come at a huge cost for Greenland and prevent it from developing the industrialized economy it needs to be able to declare independence from Denmark.

Oil was once seen as a key element of an independent Greenlandic economy, but in July Egede’s government announced it would no longer permit oil exploration, citing its environmental costs, and growing global efforts to shift away from fossil fuels.

The decision to sign on to the Paris agreement comes after the Egede government determined that it would be able to set goals separately from Denmark.

Those goals are due to be presented in a climate action plan that Egede promised would be “ambitious.”

Although he stopped short of presenting specific initiatives or targets on Monday, Egede pointed to the decision to end oil exploration as a sign of his government’s commitment to addressing climate degradation.

“Naalakkersuisut believes that the people of Greenland must do what we can to reduce carbon emissions and to promote a sustainable, green transition. The future belongs to sustainable energy solutions, and we have a lot to gain,” Egede said.

One area where Greenland sees an opportunity for itself to benefit from efforts by other countries to reducing carbon emissions is by selling its abundant hydropower for use in power-intensive industries.

Another area he said his government would look into is reducing pollution from ships, which is the country’s largest source of emissions.