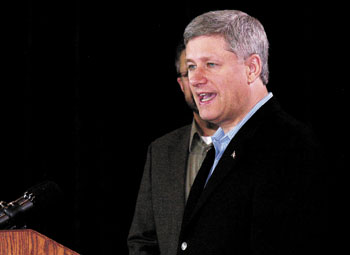 Prime Minister Stephen Harper used his first press conference in Nunavut this year to confirm a piece of news that most northerners already knew: that Ottawa will create a new northern economic agency to be headquartered in Iqaluit, with sub-offices in Yellowknife and Whitehorse

The agency, to be called CanNor, will spend $50 million over five years, and incorporate an array of existing federal programs aimed at the three northern territories.

But it’s not clear if those are new jobs or if the agency will be staffed by employees transferred from other federal offices in the North.

That’s because the federal government’s operations in Iqaluit suffer from the same problems that plague the Government of Nunavut: understaffing, high costs, poor support services, a shortage of staff housing and unreliable internet access.

But Harper, who made the final decision on the issue, said it’s Iqaluit’s current state of underdevelopment that makes it an ideal location for a development agency.

“Why don’t we as a federal government face that directly by putting the agency where the challenges are the greatest and overcoming them ourselves?” Harper said.

Harper also fielded questions about the widely-published photographs, taken in July, of two children sleeping beside a garbage can outside the Iqaluit Northmart store surrounded by discared cigarette butts and other refuse.

“Oviously this is a terrible, tragic story and I think everyone of us feels pain in our hearts when we see that kind of story,” Harper said.

“I believe that it would be naive for any of us to believe that this is an isolated story, whether here in Iqaluit, in Nunavut, or frankly, anywhere else in the country. There remain significant social problems throughout our society.”

“It’s certainly not the only solution, but obviously, you know, where economic opportunities are wanting, where economic needs are greatest, you do tend to find these problems more so,” Harper said.

Leona Agglukak, the Nunavut MP and federal health minister, told reporters that the story behind those pictures is “very, very concerning.”

But she pointed that it’s the GN, whose Department of Health and Social Services she headed until last year, that is responsible for social programs in Nunavut.

Harper, who arrived at the Iqaluit airport early Monday evening, held meeting with members of his cabinet’s priorities and planning committee, inspected the navy frigate HMCS Toronto, and boarded the submarine HMCS Charlottetown.

His visit coincides with Operation Nanook, an annual air-sea-land exercise involving the Canadian Forces and a variety of civilian agencies, including the Government of Nunavut, the RCMP and the Coast Guard.

On Thursday, Harper will make a short visit to Pangnirtung, where’s he’s expected to make an announcement. He’ll likely make another announcement later that day in Iqaluit.

After Thursday, Harper will fly to Yellowknife and then Whitehorse, where his northern tour will end Aug. 21.