Whale was “bigger than my house,” says Lenny Aqigiaq Panigayak 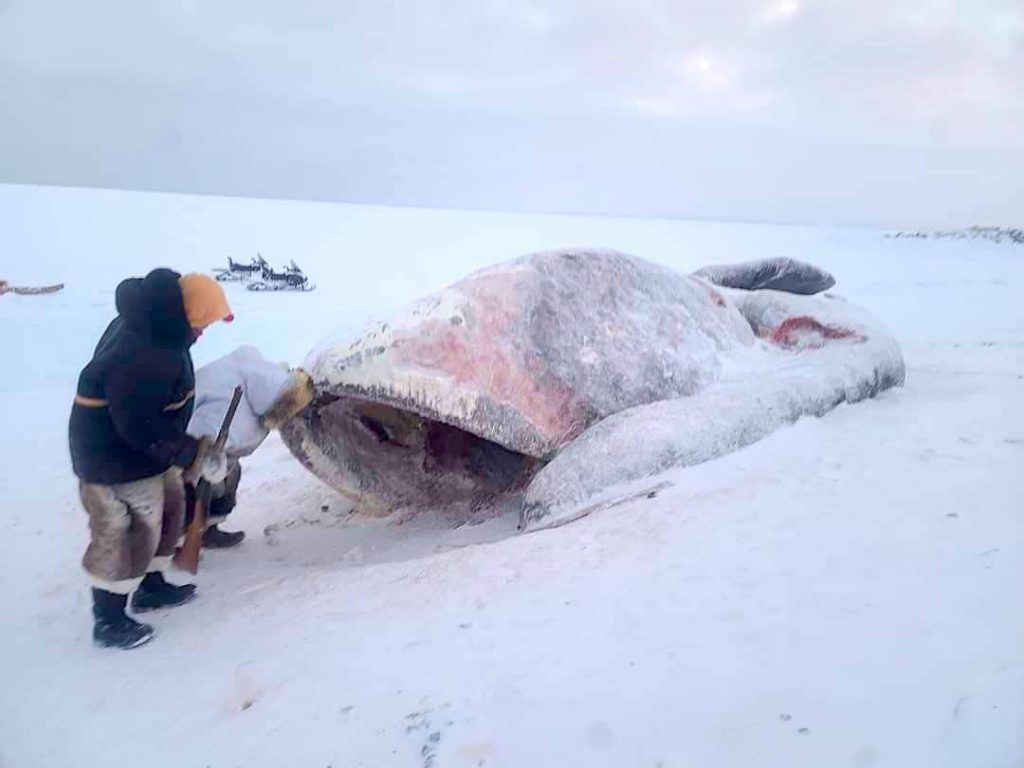 Andrew Panigayak Jr. and Isaac Panigayak peer into the mouth of the beached bowhead carcass they found last weekend along the Gulf of Boothia, about 100 kilometres overland from Taloyoak. (Photo courtesy of Lenny Aqigiaq Panigayak)

Lenny Aqigiaq Panigayak of Taloyoak said he was seal hunting by the Gulf of Boothia, about 100 kilometres overland from his community, when his nephew, Andrew Panigayak Jr., told him and his father, Isaac Panigayak, about a dead bowhead whale carcass on the beach up ahead.

The whale, which Panigayak said looked “bigger than my house,” was lying above the high tide mark. 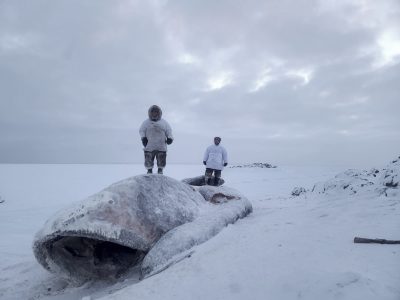 The bowhead whale looked to have been on the beach since before freeze-up, more than a month ago, he said.

Since then, polar bears and foxes had been eating the carcass.

In fact, when the hunting group was there, they were afraid that some of the polar bears they had seen in the vicinity would come back to check them out.

“At the time, it was very nerve-racking, thinking there might be polar bears, so it was exciting, a lot of fun, but your heart is beating,” Panigayak said.

It was his first time seeing a bowhead, he added.

Killer whales may be to blame for bowhead whales beaching

The condition of the four beached bowhead whales found in October near Kugaaruk seemed to point to killer whale attacks, due to the nature of the mutilation of the carcasses.

The Department of Fisheries and Oceans has since received samples from the four bowhead whales in Kugaaruk.

But DFO researcher Steve Ferguson said Manitoba went into Code Red for COVID-19 right after the samples arrived and, as a result, he has not able to inspect them.

Ferguson said earlier this month he learned that hunters from Naujaat had come across four beached bowhead whale carcasses.

“We sent up sampling kits to the Kurtairujuark hunters and trappers association and a new contract for someone to collect samples,” he said. “But Nunavut went into lockdown and we never heard back.” 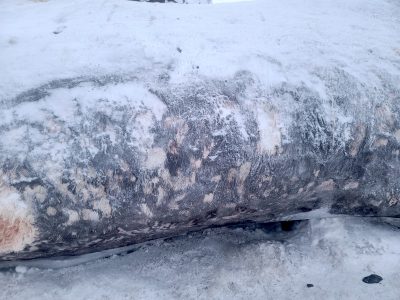 This photo shows some of the marks on the dead bowhead whale. (Photo courtesy of Lenny Aqigiaq Panigayak)

It’s hard to gauge whether killer whales are behind the beached bowhead whales.

Ferguson said he isn’t even sure the samples will confirm that.

But last March, Ferguson was among the co-authors of a research paper published in the Proceedings of the National Academy of Science called “Killer whale presence drives bowhead whale selection for sea ice in Arctic seascapes of fear.”

In this paper, they detailed tracking that shows how bowhead whales in the Gulf of Boothia flee into dense ice and shallow near-shore waters when killer whales approach, in behaviour called aarlirijuk (fear of killer whales) in Inuktitut.

Ferguson has wondered if bowhead whales might sometimes strand themselves at these times.

In recent months, killer whales have been in the news for attacks on boats: in a recent New York Post story, a sailor described a “terrifying” rogue attack off the coast of Portugal.