I wear my snow goggles at night 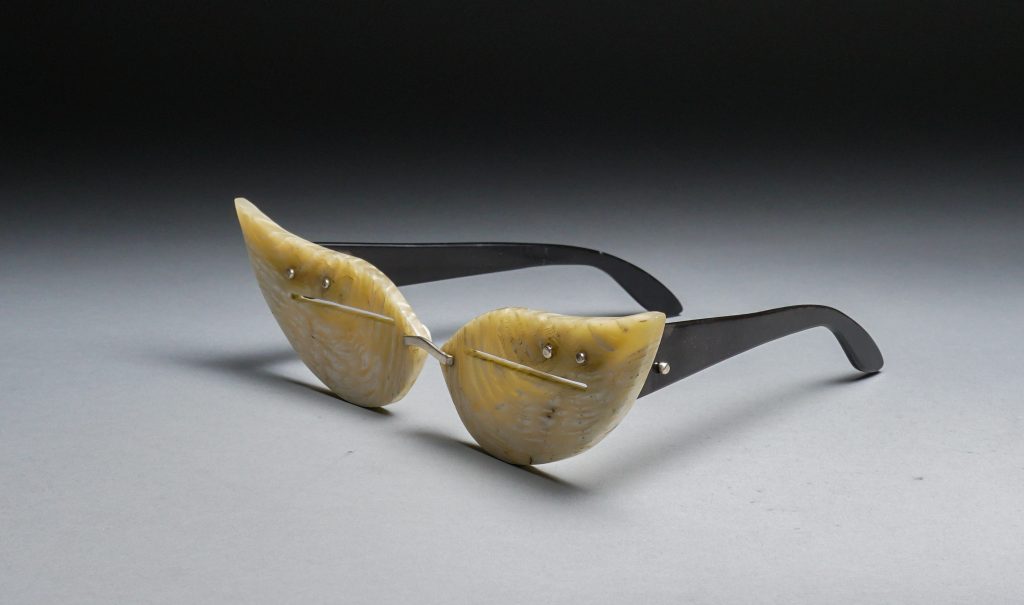 This is one of Iqaluit artist Mathew Nuqingaq’s contemporary takes on eyewear traditionally worn by Inuit to prevent snowblindness. This piece is made from muskox horn and baleen. (Image courtesy of Feheley Fine Arts)

It’s a fitting focus for the Iqaluit artist, who is well-enough known for his trademark takes on Inuit snow googles—or aayuraa—that when he opened his own studio more than a decade ago, he named it Aayuraa Studio.

“When I was a kid I made a pair of wood ones, and I never stopped,” said Nuqingaq. “I was always fascinated by them.”

Yet this is the first time one of Nuqingaq’s exhibits has focused on his snow google creations.

About a dozen pairs of eyeglasses are on display, in styles ranging from John Lennon’s little round glasses to cat eye frames to modern wraparounds.

They’re made from an equally broad range of materials, including muskox horn, antler, baleen, silver, copper, gold and wood.

Yet, for all these exotic materials, Nuqingaq says his favourite pair on display are made from a box of Kellogg’s Frosted Flakes.

“I just loved the little box they used to have when I was a kid,” said Nuqingaq. “So I thought I’d make a pair.”

Also on show is a pair of silver round sunglasses with slits that were worn by Prince Charles and his wife Camilla during their 2017 visit to Iqaluit.

A pair of cat eye frames are made from muskox horn. Their black stems look as if they’re made of plastic, said Nuqingaq, but it’s actually baleen.

“They’re coming back, that style,” he said.

“They have a nice pattern because hockey sticks have different layers to give them flex and strength,” said Nuqingaq.

He said the Toronto exhibit launch will give him a chance to reconnect with friends in the art world. It also gives Nuqingaq—who is a past recipient of the Order of Canada and is currently president of the Inuit Art Foundation—reason to be thankful for his supporters over the past 20 years he’s been creating art.

“Without them I wouldn’t have these opportunities.”