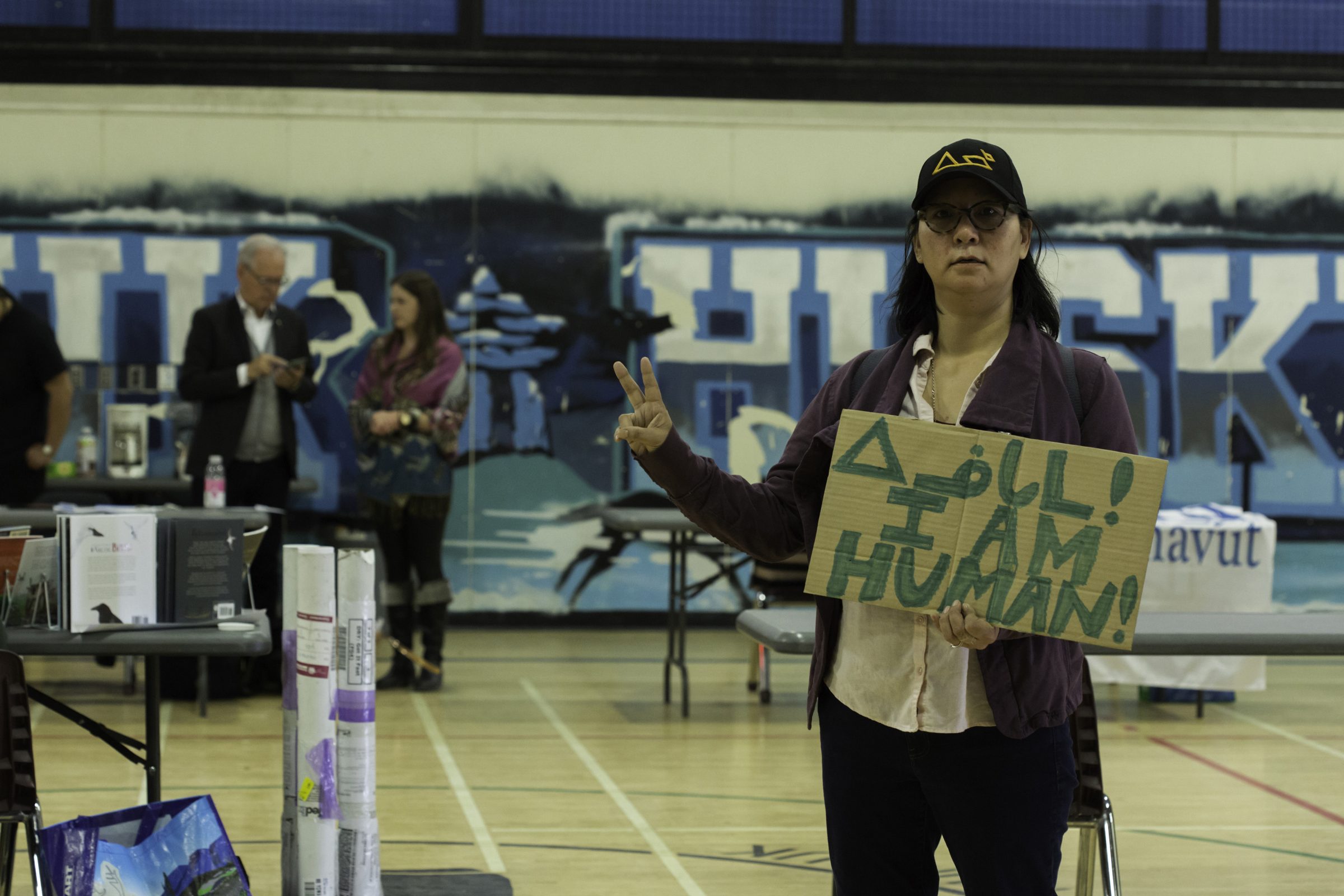 Oo Kierstead, a former employee of the Canada Council for the Arts, accused the council of discrimination against Inuit when the council’s CEO, Simon Brault, spoke at an Iqaluit event on Aug. 22 during the Nunavut Arts Festival. (Photo by Thomas Rohner)

Simon Brault, CEO of the Canada Council for the Arts, which provides federal funds to artists and art organizations, was in Iqaluit last week promising more support for Inuit artists.

But Brault’s presence inspired opposition from a single protester, Oo Kierstead, when he spoke at an Iqaluit event on Aug. 22 during the Nunavut Arts Festival.

At the lunch-time event, Kierstead accused the council violating the language rights of Inuit.

“I am Inuk. I am human. I have human rights,” Oo Kierstead said during the discussion, which included about 30 artists from around Nunavut.

Kierstead told Nunatsiaq News she worked at the council in Ottawa for seven months recently as its only Inuktitut-speaking employee.

She said she quit because the organization did not accommodate Inuit in Inuktitut.

“How are you reaching Inuit in their own language?” she asked Brault at the event.

“We aren’t, not yet. It’s something we should do,” Brault replied.

The lunch event, put on by the Nunavut Arts and Crafts Association during their annual arts festival, came at the tail end of a two-week northern tour for the council.

The tour was part of a “huge outreach effort to make sure Indigenous artists are supported on their own terms,” Brault told Nunatsiaq News in an interview. 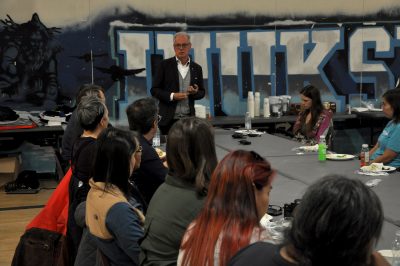 Canada Council for the Arts CEO Simon Brault speaks at Nunavut Arts and Crafts Association event as part of the Nunavut Arts Festival on Aug. 22. (Photo by Thomas Rohner)

His team plans to use the feedback received on the tour to shape a northern-specific strategy for the council’s 2021-26 mandate.

“The big takeaway from this part of the trip was that we need something specific for Nunavut,” Brault said.

In part, that’s because of Nunavut’s unique language landscape, where Inuktitut is widely spoken, including by unilingual artists.

But Brault told the audience the council has undergone a “revolution” and “transformation” in recent years that has it poised to provide more support to Inuit.

The big changes include increasing funds for first-time applicants from one or two per cent of the council’s funding budget to 25 per cent, and streamlining 150 funding programs to six, Brault said.

“We have had to reinvent everything at the Council. And we still have a lot of work to do,” Brault said.

One of those six programs, called “Creating, Knowing and Sharing,” is specifically tailored to First Nations, Métis and Inuit artists.

Between 2015 and 2021 the council will see its budget more than double from $118 million to $360 million, according to their latest annual report.

In 2017-18 the council had a $269-million budget. That included $9.4 million in grants for their Indigenous art program, 40 per cent of which went to first-time artists.

But Kierstead said language is not the only barrier facing Inuit artists in Nunavut communities; internet access is another one.

“Is this offline application still 250 pages and only available in French and English?” Kierstead asked.

Council staff replied that the application has been shortened, but was still only available in French and English.

Brault said the council has funds available for Inuit artists to hire an interpreter/translator to help navigate the council’s application.

But he said this creates a Catch-22, since information about the existence of the available grants is not available in Inuktitut.

“How do you accommodate Inuit without accommodating their language?” she said.

Brault said a cornerstone of the council’s efforts to find a Nunavut-specific approach is partnering with local governments and organizations.

While in Iqaluit, his staff met with Government of Nunavut officials to gauge the Department of Culture and Heritage’s support for art and culture in the territory. Brault said the council is keeping a close eye on Nunavut’s devolution process too, as that could affect funding for arts development.

In the meantime, the council will continue to seek partnerships with organizations like the Nunavut Arts and Crafts Association to improve its accessibility to Inuit, he said.

“I’d like to see art and artists more valued and play a prominent role in a Nunavut that has more autonomy and self-governance,” he said.