In Nunavut, most employed Inuit have government jobs: StatCan 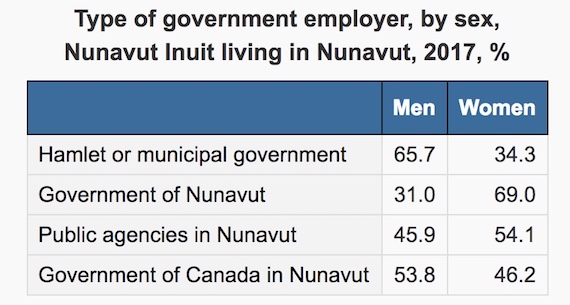 Here you can see the type of government employer, by sex, for Nunavummiut in 2017. (IMAGE COURTESY OF STATISTICS CANADA)

Nunavut is a territory of government workers.

That’s the one of the biggest takeaways from yesterday’s 2017 Aboriginal Peoples Survey—Nunavut Inuit Supplement.

The figures from this Statistics Canada report show that if you are an Inuk and work in Nunavut, the chances are that you work for government.

Of those Nunavummiut who were employed, more than half (54.7 per cent) reported working for government in Nunavut, either at the federal, territorial or hamlet/municipal level.

The StatCan data, which looked at the availability, interest and preparedness of Nunavummiut for employment in government in Nunavut, reveals as well that you’re more likely to encounter Inuit women in Government of Nunavut offices than Inuit men: the GN was predominantly composed of women (69 per cent), while hamlets or municipal governments had a higher proportion of men (65.7 per cent).

Overall, the GN was the largest employer of Nunavut Inuit (56.6 per cent), followed by hamlet or municipal governments (34.3 per cent).

Nine out of 10 past government employees reported that they would be interested in working for the government again in the future.

Half of all Nunavut Inuit, aged 15 to 54, had formally applied at least once for government employment, although of those who had applied, one-quarter reported that they had experienced difficulties or challenges when applying.

The most commonly cited difficulties: not receiving any feedback from the employer after applying, the hiring process was unfair, and not being able to meet the education, work experience or equivalency requirements.

More women also reported challenges holding down a government job related to childcare (79.8 per cent) and personal or family responsibilities (60.8 per cent,) whereas lack of confidence and preparedness was more commonly reported by men (54 per cent), StatCan said.

Statistics Canada also released information on the labour market experiences of Inuit based on findings from the 2017 Aboriginal Peoples Survey, which showed, among other things, that most employed Inuit worked a permanent job and many continue to supplement their work with traditional activities.

The proportion of Inuit aged 25 to 54 who were employed was higher outside Inuit Nunangat (64 per cent) than within (56 per cent), although a smaller proportion in Nunavut reported a shortage of jobs.

When asked what would help them most in finding a job, 44 per cent reported that an increase in the number of available jobs would help most, 35 per cent said skills training and 26 per cent said more academic education.