In “rare step,” review board rules to extend hearing on Baffinland’s expansion plans 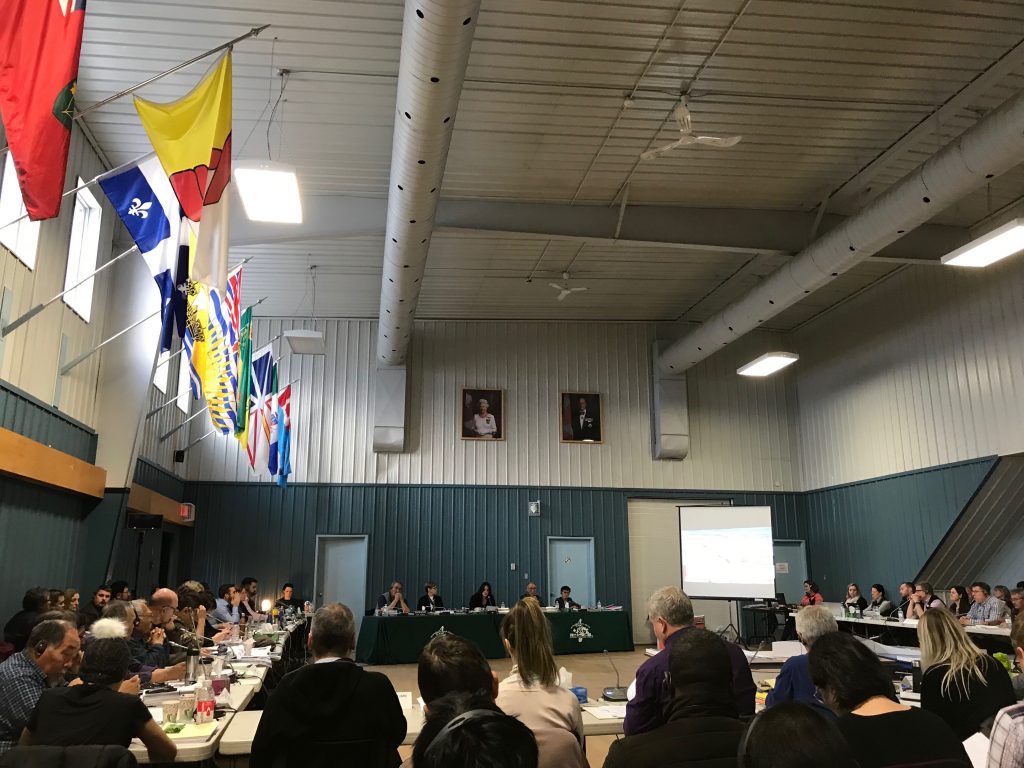 Marjorie Kaviq Kaluraq, chair of the Nunavut Impact Review Board, reads the board’s decision to continue the final public hearing on Baffinland’s phase two expansion proposal past Nov. 9 during the fourth day of the hearing in Iqaluit, on Nov. 5. (Photo by Emma Tranter)

This week’s final public hearing on Baffinland’s plans to expand its Mary River mine will not conclude on Nov. 9 as originally scheduled, the Nunavut Impact Review Board ruled today.

In a ruling in response to a motion from representatives from Igloolik submitted on Monday,  Nov. 4, the NIRB ruled that intervenors in the project had not had enough time and did not have enough information to review the phase two proposal.

“The public hearing of this assessment will not be successfully concluded at this time,” Marjorie Kaviq Kaluraq, the NIRB’s chair, said.

“As a result the board has taken the rare step of directing that the in-person public hearing component of the board’s assessment of the phase two development proposal be continued to another in-person session to be scheduled in the future.”

Kaluraq said the scheduling of the additional session will be contingent on the NIRB’s confirmation of additional funding to make it happen.

The public hearing and community roundtables in Iqaluit and Pond Inlet this week will continue to take place.

“The board has decided that the public hearing record is incomplete and will not be sufficient to allow the board to commence decision-making,” she said.

“In the coming days, the board’s staff will attempt to confirm the required funding and logistics for the subsequent in-person public hearing. The board will provide further direction to all parties on the scheduling of this event as soon as it is available,” she added.

Kaluraq also said several documents have been presented to the final hearing without Inuktitut translation.

One of those documents is Baffinland’s rail alignment plan for its proposed 110-kilometre railway. That was submitted to the NIRB on Oct. 15 in English only.

Baffinland said it would submit the translated rail alignment plan.

The motion from Igloolik, read by technical advisor Merlyn Recinos, asked for the NIRB to keep its public record open until the five North Baffin communities could hold a meeting.

Those communities had been trying to secure funding to hold a collective meeting on the project for quite some time, Recinos said. The communities just received approval for funds from Crown-Indigenous Relations and Northern Affairs Canada on Nov. 4.

Igloolik’s motion also requests that the NIRB keep its public record on phase two open until the first week of December 2019.

In a discussion of the motion during the morning of Nov. 5, Baffinland and all the intervenors were in support.

In direct response to Igloolik’s motion, Kaluraq said the communities would have until Dec. 16, 2019, to file a report to the NIRB on their meeting. Intervenors will then have until Dec. 19 to respond to that report if desired, the NIRB said.

Baffinland would then have until Dec. 23 to respond to intervenors.

After the record closes, NIRB has a 45-day window to make its recommendations to the federal minister of northern affairs.